There’s only one unit we can summon now ! This is what it was created for ! The Suicide Squad ! Flash Task Force X !”

There have been many versions of DC Comics’ Suicide Squad, and of the DC Universe, over the decades.

Things can get intricate. So we strongly suggest reading our Suicide Squad articles *in order*, to keep your suicide ducks in a suicide row.

In-universe, there are five main eras for the Suicide Squad :

As with the 1940s Suicide Squadron, there was interesting additional material in The New Frontier. Same as before, we’ll cover that material but clearly flag it (heh) as coming from a different continuity.

The Cold War version of the Suicide Squad was in just six issues of The Brave and the Bold. From August of 1959 (cover date) to December 1961 (cover date).

On the other hand, these dates — early during the Silver Age of super-hero comics — make the Squad a natural answer to the question “who was defeating the comic book menaces after the World War Two heroes retired, but before the modern super-heroes emerged ?”.

(Another answer is the Challengers of the Unknown. But the Squad’s vibe is a better match for the “last line of defence” job, whereas Kirby’s Challs felt more like gentlemen adventurers).

It’s John Ostrander who shoehorned everything into a coherent continuity decades later. 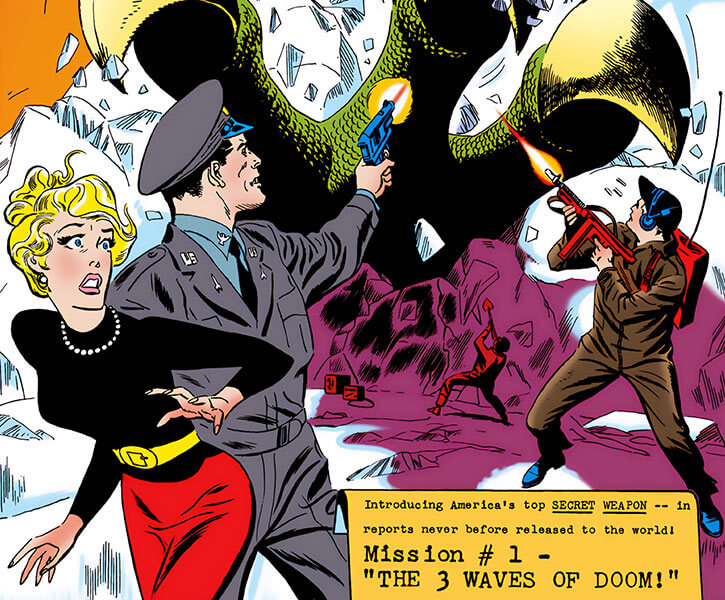 The Ostrander reconstruction has a weakness. It is the same man — Rick Flag, Jr. — who led the 1959+ Mission X Suicide Squad and the 1987+ Amanda Waller Suicide Squad.

This can work in some compressed, sliding timelines  . Where only a few years elapsed between the two.

But our goal is to feature the Mission X Suicide Squad as it appeared in the vintage stories. Not to make something up about how it could have looked if it took place during the early 1980s, or the late 2000s, or whenever a sliding timeline would take us.

Especially since the best hook of the Suicide Squad is that it can fill the gap between heroic ages.

We’ll therefore use our usual solution, allowing us to describe the stories as they were published. 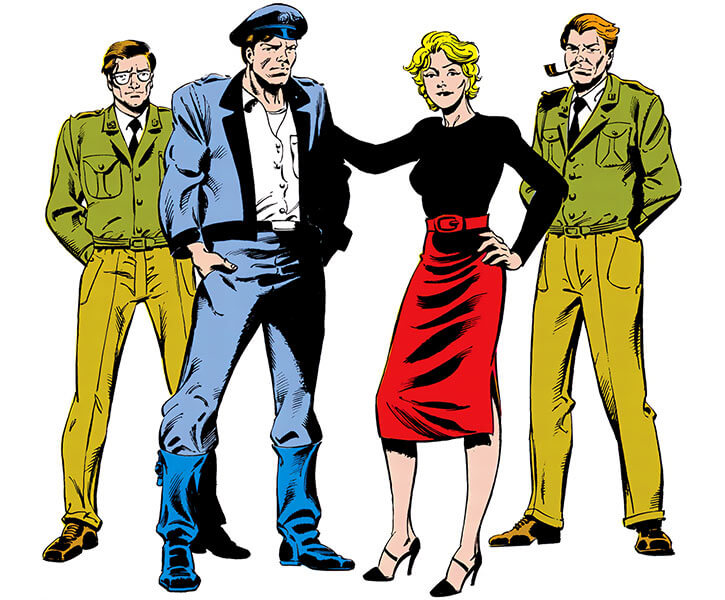 This is the official team shot of the Silver Age Suicide Squad in the 1980s Who’s Who in the DC Universe. Unfortunately, this entry got confused between Bright and Evans. Probably because the vintage stories occasionally mixed them up. This mistake is visible even in the art above.

One story implies that they defeated some extraordinary criminal conspiracies, earning them the enmity of the underworld. But no such case was chronicled.

Extent of operations:
Global, but reacts primarily to menaces against the United States.

Known Enemies:
A number of monsters, aliens, dinosaurs, criminals, etc.. None was a recurrent opponent in chronicled cases.

Known allies:
The Suicide Squad can mobilise nearly any American government force. And some NATO forces if their mission parameters authorise it.

Grace, Evans and Bright in the New Frontier continuity.

Organizational structure:
The Squad is backed by a small structure called Mission X. It seems to be the only active part remaining within the larger, but hollowed-out, Task Force X framework.

Known current members:
During this era :

Known special agents:
Gen. J.E.B. Stuart was a close ally of the Suicide Squad. But it is unrevealed whether he remained in charge after the Squad was briefly disbanded in 1960.

Okay, one notable #1 was the Browns’ “The Three Bells”. It is a translated cover of an Edith Piaf song. So that sounds somewhat odd to Francophone ears, who keep expecting Ms. Piaf to start singing, but it’s a great vintage song.

Plus, both the arrangements and the lyrics are very 1959, so that’s why we’re looking for.

It was loaded with every piece of scientific equipment that could be crammed in.

The SS-1 includes a 12 APs Lab, and ample reservoirs of chemicals such as manganese dioxide or sodium carbonate. Plus nozzles to spray those chemicals behind the plane.

It carries two 8 APs Omni-Gadgets, with the limitation that they must be scientific observation and testing equipment.

The SS-1 had designated ejectable seats. These normally were used after suiting up in a crash suit and helmet (looking like a sort of lighter astronaut suit).

Flag and Grace sat in the cockpit. Flag as pilot and Grace as co-pilot, radar navigator and bombardier/weapons officer.

Bright and Evans sat in the bay with the scientific equipment.

The Squad went through several versions of the SS-1. Their missions were rough on equipment.

The original design seemed to be a modified Boeing B-47 Stratojet  with a greatly enlarged airframe.

Later versions are less clearly seen. But they evoke a heavily modified B-52 Stratofortress  .

A version of the SS-1 was still in service in the 1980s. Amanda Waller’s engineers retrofitted it into a fast transport aircraft. From the distinctive front loading ramp it might have been a modified Lockheed C-5 Galaxy  . But the real Galaxy is much larger than the SS-1 seen in these stories.

Perhaps this plane was a one-off Lockheed prototype. Produced in 1964 or 1965 and delivered to Mission X mere days before the agency closed its doors.

In one 1987 flashback panel, Flag and Bright operate indistinct small arms, Evans has what seems to be a .45 semi-auto handgun, and Grace a compact revolver.

These are in DCH terms Exotic Weaponry. Squad members carry them on a fully-stocked WW2-style military belt, even while in their civvies.

Those are thrown much like grenades. Cartridges also have a timer that seems to be quickly adjustable between 3 and 6 seconds.

As the years pass the cartridges get smaller. At first they are fairly similar to “pineapple” WW2-era US Mk2 grenades, and each Squad person carries about four of different types. Later, 12-15 can be carried on a belt, and they look like very fat pens with buttons.

The main types of Squad cartridges are :

The Squad will almost always Team Attack with their cartridges, which are generally used against dinosaurs and alien spaceships. To make that easier they seem to carry the same mix of cartridges, presumably in the same order.

These specialised weapons were powerful. They clearly outperform even 2010s military equipment. Between this power, Team Attacks and Hero pointsDC Heroes RPG concept expressing narrative importance/immunity., the Squad could occasionally destroy giant monsters, UFOs, and McGuffins with just what they carried on their belt.

In the New Frontier continuity, the Squad had a more military streak.

They used the following weaponry :

The DC Universe Suicide Squad occasionally had such weapons – but only on the covers, not in the stories. Still, assuming that they occasionally used the same ordnance as in New Frontier isn’t a huge stretch. *Unless* you want to lean into the 1950s aspect of defeating stuff through scientific knowledge, rather than shooting impressive guns a lot.

Several panels show the New Frontier version of the Squad with one or two 1960s-style sci-fi guns. Perhaps lasers.

Therefore, this history section can start after the fall of Task Force X during the mid-to-late 1950s.

Rick was the son of Sharon Race Flag and Richard Montgomery Flag, a.k.a. Rick Flag, Sr..

He followed in his father’s footsteps, and became an amazingly effective military officer.

The best pilot within the USAF was either Flag, or Kyle “Ace” Morgan. But Morgan left the service and joined the Challengers of the Unknown.

After the fall of the Task Force X Suicide Squadron, there was another Suicide Squad. It was active in 1957/58.

It was a commando unit assembled by USAF General Wade Eiling as his private death squad. Back then, the USAF was barely starting to train ground forces to defend airbases. An elite infantry force of aviators was unprecedented.

Eiling specifically picked Rick Flag, Jr. to command it. The General presumably named the unit “Suicide Squad” in honour of Flag’s father, to harness the son’s motivation to defend the familial legacy.

The General wanted to experiment with soldiers with an abnormal level of motivation and tolerance for risk. This likely was an attempt at recreating the “secret sauce” of the Suicide Squadron.

All the men on the team had been unethically manipulated to reinforce their drive. They also received post-hypnotic override implants in case they ever discovered the truth.

For Eiling these elite soldiers were expendable. He eventually sacrificed the team for strategic expedience.

Flag, Jr. was the only survivor.

Rick Flag was selected as an astronaut training program candidate. This is where he met Dr. Karin Grace.

Dr. Grace was a USAF physician. She worked with NACA  in the nascent field of space medicine.

She had previously served with an air rescue unit, but one mission went terribly wrong. The rescue plane crashed at sea, and she watched her lover Steve die. Karin was the only survivor.

The traumatised Grace was nicknamed “the ice doctor” at NACA. Since she was aloof toward the men attempting to pick the beautiful physician up.

Flag was originally among their number. But when he was told about Dr. Grace’s backstory he decided to tell her about his father. The two bonded over their respective losses, and became lovers.

After the President Kennedy assassination, Argent fully went rogue. They would operate deeply undercover for decades, only meeting their end at the hands of Amanda Waller during the 1980s.

Thus, by 1959, Task Force X was an empty shell. Yet General J.E.B. Stuart needed agents to defend the Free World™. He started by recruiting Rick Flag the younger, with General Eiling’s encouragements.

Flag would lead a much smaller structure under Task Force X. It was called Mission X – presumably after the old Dinosaur Island mission code used by Rangers. Mission X would field but one four-person team, the new Suicide Squad.

Evans and Bright had narrowly survived a nuclear weapons research disaster, which fatally irradiated their colleagues. Like Grace and Flag, the traumatism left them exceptionally determined to serve.

Thus, the new Suicide Squad was made up of broken people with psychological problems and a bad case of survivor syndrome.

Yet it proved amazingly successful. The Squad employed heroic courage, clever tactics, cinematicThe level of power and (un)realism found in a spectacular action movie.-grade scientific analysis, and experimental science and technology. They defeated extraordinary menaces that conventional military forces were ineffective against.

The Squad’s rules of engagement were colour-coded.

The Squad did not conduct undercover missions. In fact, they were minor celebrities.

Task Force X’s budget was under constant threat. Therefore, one suspects that J.E.B. Stuart publicised his agents so Congress would be reluctant to cut Mission X’s budget.

In the second half of this article we’ll discuss the Silver Age adventures of the Squad, its fall, and various less-detailed timelines for variants over this Suicide Squad that appeared in DC Comics over the decades.