Sun-Chained-In-Ink has a small-ish star locked into his body, where it is mystically bound by his tattoos. Were it to be released, it would thoroughly destroy the Earth within minutes. It might be a small sun, but that’s still much bigger than non-gas-giant planets.

Since the process seems mystical in nature, Sun-Chained-In-Ink might be in some way tapping the power of the Maōri sun god Tama-nui-te-rā , the “Great Son of the Sun”. This is the name he was chanting when he finished his tattoos.

Sun-Chained-In-Ink can release all energies a G- or F-Type star can (his sun looks yellow). That includes gigantic jets of flame and light and potent gravitational fields. The latter can be used to flatten everything and everyone around him, or make himself and his allies float or fly.

He apparently has fine control over these energies. When he blasted a large group of heroes attacking the Dreambound, flattening half of them in one blast, he did non-lethal damage. Presumably he arranged for his blast to be chiefly concussive force and light.

Sun-Chained-In-Ink also vaguely seemed to have some level of superhuman strength and durability, and shares some of the majesty and presence of the sun within him.

Our game stats for the character provide a more detailed view (that’s their whole point). But keep in mind that they’re quite conservative. All versions of Sun-Chained-In-Ink have demonstrated enormous power.

Hawkman once accidentally forced Sun-Chained-In-Ink to free the sun within after damaging the tats’s pattern by breaking the skin. Since such an event will likely put an unseasonable end to the campaign within minutes, it is best left to the GM’s judgement.

Hemi Kiwara is an artist and painter from New Zealand, of Maōri heritage. The central theme of his work was the sun. Kiwara had a powerful intuitive understanding of the sun’s light and warmth, its power and majesty.

However, to his frustration he never managed to express this meaning in his art. No matter how he engaged the canvas or the concrete.

Kiwara made his living as a tattoo artist. He thus came to realise that his skin might be the proper medium for what he was trying to express about the sun. He used his knowledge of Maōri mysticism to draw specific sigils all over his body.

Somehow, when he completed the patterns, a potent ritual took place. A sun came to inhabit his body, turning him into a powerful mystical melange of man and star.

Sun-Chained-In-Ink was one of the four persons recruited by the “Dark Trinity” (Morgaine, Enigma and Despero) to act as minor agents. All four recruits were, in their way, expending their life in the pursuit of nigh-impossible dreams. They were thus called the Dreambound. 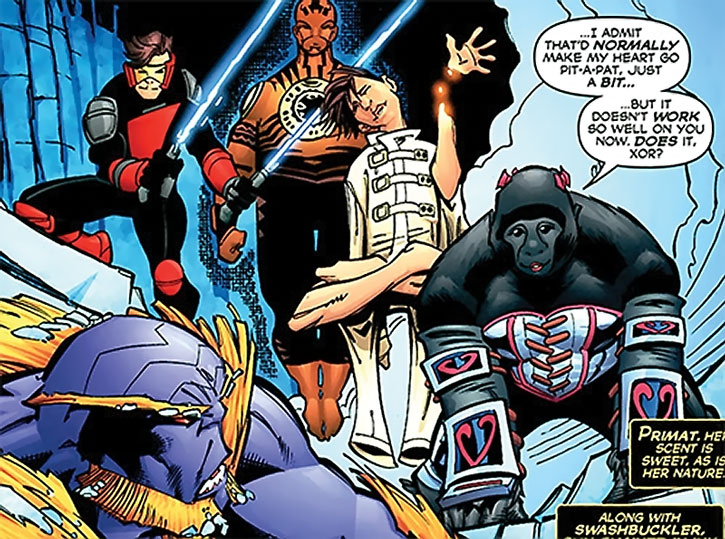 They were first detailed to stealing a variety of items symbolically tied to the real Trinity (Wonder Woman, Superman, Batman). Though they were successful, disaster nearly struck as Sun-Chained-In-Ink was forced to release the sun inside him. The other three were arrested.

As they were held in special facilities, the reality was rewritten.

On this new version of Earth, they recruited the Tattooed Man III (Mark Richards) to become the new Sun-Chained-In-Ink. But though they escaped from prison, they were drafted anew by Morgaine, this time to assemble an army for her. This army of super-villains, called the Dark Arcana, ended up conquering this recreated Earth against the global forces of the Justice Society International.

However, the three original Dreambound (Primat, TVM and Swashbuckler) resented their conditions as slaves and grunts for Morgaine. Their drab existence wasn’t the dream world they had been promised. After confronting JSI spy the Atom, the trio allied with S.P.H.E.R.E.. It was a construct holding the consciousness of Enigma’s rogue daughter.

There was also tension with Richards, who considered the other three to be weaklings and idiots.

As the godlike Trinity came to confront the Dark Trinity, the previous reality started re-asserting itself. And thus the original Sun-Chained-In-Ink emerged from Richards’s tattoos as he was restored.

Happy to be reunited with him, and seeing the empire of the Dark Trinity catastrophically crumble, the Dreambound fled the scene. To their dismay they were forced to abandon S.P.H.E.R.E. as they ran.

Though they tried to hide, the Dreambound realised that they had to do something. They thus recruited Konvikt, a fallen member of a previous version of the Dark Trinity. The Dreambound and Konvikt attacked Despero and Morgaine at a critical moment, and Sun-Chained-In-Ink was later a key component of the spell that brought Krona down.

Though the Dreambound were eventually swept aside by Morgaine, and the Earth briefly destroyed, the situation was soon put right.

The Dreambound located the unconscious Sun-Chained-In-Ink in New Zealand, reanimating him and making sure that he was okay. Though they were soon arrested, the various heroes present at the final battle testified that the Dreambound had valorously helped and only served Morgaine under duress.

Thanks to these testimonies, the bizarre quartet was soon freed to find its way in the now-restored world.

The further adventures of the Dreambound have yet to be chronicled.

Hemi’s extensive tattoos were done with a modern electric tattooing needle, rather than traditional ta-moko techniques.

Sun-Chained-In-Ink often hovers around, glowing and talking in what I assume is a booming and crackling voice.

Early on, Sun-Chained seemed to be a power-mad villain on some sort of destructive mystical ego trip. The rest of the Dreambound seemed to like him, though, so he may have been more restrained and congenial when not in the field.

After him, Richards also acted haughty and drunk with power, so it might be the normal effects of hosting a sun. 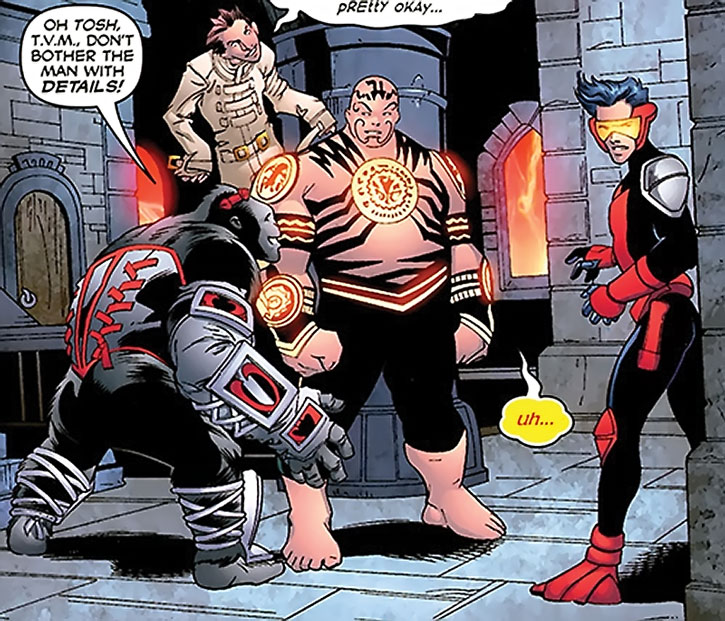 When reality reasserted itself in the wake of the return of the Trinity, and Sun-Chained-In-Ink was restored, he was more sober and much, much less overbearing. He had a vague Dr. Manhattan vibe. But instead of being utterly logical and omniscient he was more magician-like, talking in the symbolic terms of a higher world.

Still, he was himself as a force of creation, warmth and life and this nature meant opposing destroyers. Presumably he’s better-integrated with his quasi-divine nature and it no longer dominates him. Perhaps he’s now best thought of as a demigod of the sun, in the same sense that Marvel’s Hercules is a demigod of strength.

(Early) “I am Sun-Chained-In-Ink. I am the one who teased a star down from the sky, and trapped it – with my needle, and the binding patterns on my skin. I have a star within me, little ones, and I know its power. You are nothing to me. I am the centre of your universe and you orbit about me. About my gravity, my heat, my light.”

(After his resurrection) “I… almost remember, but it’s like… it’s like it’s through a haze… like a morning mist, or like a dazzle when the afternoon sun hits you right in your eye and you can only see shadows…”

“I am a force of creation. My friends are stout-hearted and true. Morgaine and her ilk are destroyers. Which will you be ?” 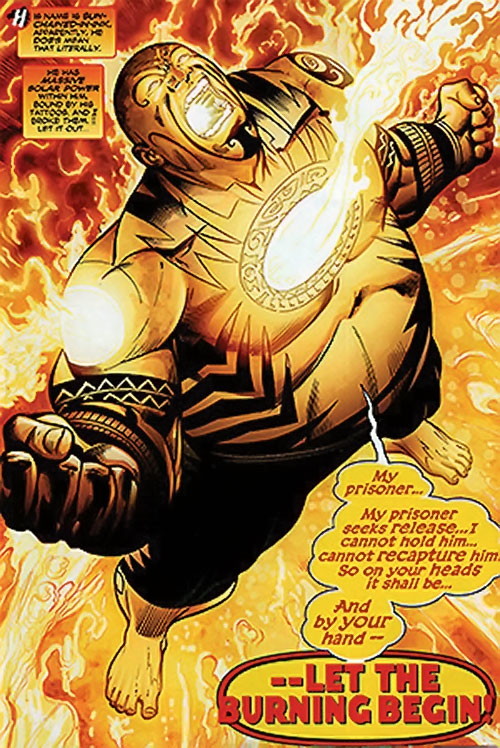 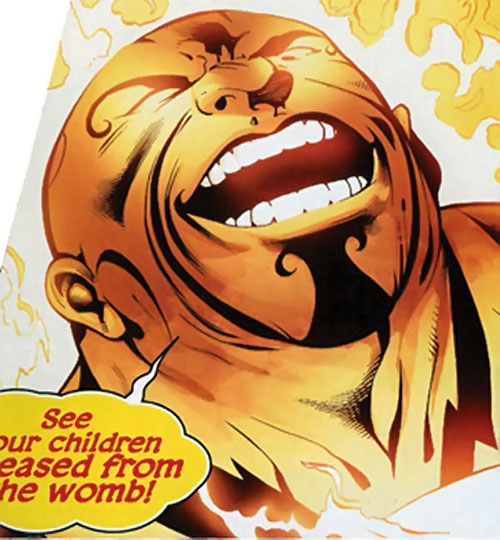