He can release an omni-directional burst of exploding flame around himself, a power he has used to reduce an entire village to ash within seconds (Bomb).

Usually, his body burns at a low, mostly harmless temperature. This is just to make him more impressive and exotic looking. At GM discretion this may give a Bonus to Character Interaction attempts like Intimidation.

He is also physically powerful, though untrained.

Nigal Douglous was born on Earth in the latter half of the 30th century, during a Golden Age of unprecedented peace and prosperity. Douglous was not, however, well-equipped for peace and plenty. He began to evidence psychotic, violent tendencies while still very young.

He killed a small alien being which he claimed to have mistaken for a dog. As a result, He was sent to a juvenile reform center. While he was not charged as an adult, he was found to be dangerous to society at large. He was imprisoned and received court-ordered therapy, which seems to have done little to curb his psychoses.

It was in the reform center that he met Reise Taylor, a beautiful biochemist. Douglous began a romance with her. After their release, Reise set up an illegal genetics lab where she gave Douglous the ability to absorb, store and release solar energy. The experiment also affected his mind, however, worsening his psychotic tendencies and causing periods of megalomania.

During one of these periods, he renamed himself Sun Emperor, and burned Reise to death. 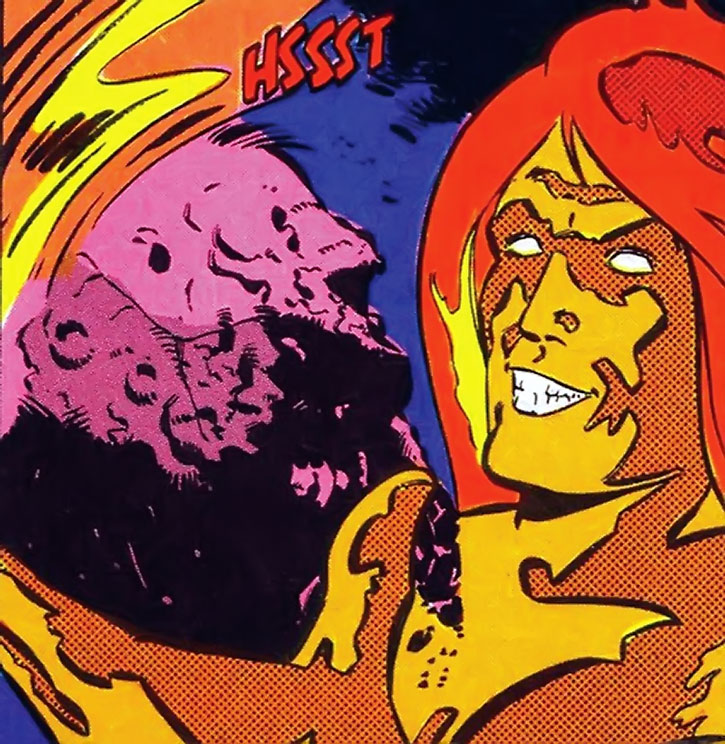 He has fought alongside the LSV ever since, acting as an advance scout and intimidator in the takeover of the planet Orando. As part of that scheme he burned an entire village to ash, leaving only one Orandoan alive to serve as messenger and witness. He was one of the last to be caught after the Super-Villains were repulsed from Orando.

Douglous was imprisoned on Takron-Galtos until that planet had to be evacuated during the Crisis on Infinite Earths, in 2986. During the evacuation he was a leader in a mass escape attempt of a prison shuttle. However, the Legion of Super-Heroes managed to recapture all the prisoners and see them safely incarcerated on the new United Planets prison-world of Labyrinth.

Sun Emperor has been in prison psychotherapy programs ever since, but remains extremely dangerous.

Sun Emperor is a tall, fit man with blue eyes and red hair. Originally his hear was cut short, but he now wears it long, flowing down to the middle of his back. He wears a costume that mimics that of LSHer Sun Boy – yellow and red with a stylized sun on the chest. However, these days that costume is only visible when Sun Emperor’s powers are neutralized or when he is asleep.

During his waking hours his Flame Project is always active at a very low level. Power literally radiates from him at all times, making his face, eyes, hair, skin, and costume glow with a red-orange light and tiny flickering flames.

Sun Emperor is a commanding presence with a charismatic, forceful personality. He works well with his teammates in the LSV and requires them to work together well, stamping on potential in-fighting before it flares out of control. If he has to flare up his own powers to stop the Super-Villains from bickering, so be it.

He fights intelligently and courageously, and almost nothing will make him back down.

Despite all of that, he is also one of the most completely psychopathic members of the LSV. It’s not coincidental that, out of all the Super-Villains, he seems to be most friendly with Lightning Lord.

His insanity seems to have grown with the years. In 2980, while leading the LSV, Sun Emperor worked out complicated plans to discredit the Legion of Super-Heroes. And he entered battle using his Flash power to try and disorient opponents.

But by the time of the LSV takeover of Orando, he almost never uses Flash any longer, instead relying strictly on his Flame Project powers whether he wants to incinerate his foes or intimidate innocents.

He is not just dangerous during battle, either. He enjoys violence and using his powers, and has been known to kill without provocation or warning. On Orando, he forced a serving woman to kiss him, then burned her to ash in mid-kiss while making jokes about having a “short and fiery affair.”

He then continued to tell jokes while holding her skull in his hand, oblivious to the shock and disgust of many of his teammates.

“You. You have courage, fool. You may live…to convince all the rest who dwell on this world to surrender to your new masters.”

Sun Emperor: “Crazy people are dangerous, Lightning Lord. Hmmm…and who are you, my sweet ?”
Serving Woman: “Thora, my lord.”
Sun Emperor: “Give us a kiss, Thora…mmmm…I believe we’re going to have a short (sszzll) – and fiery affair.” (Holding her now burned, ash-covered skull, he adds): “Alas, poor Thora… I never did know her well.””

Shadow Lass: “We’ve broken your insane Legion, Sun Emperor ! You’re all going to Takron-Galtos !”
Sun Emperor: “Not without fulfilling our oaths, Shadow Lass – and your puny powers of darkness will let me do as I swore – and burn a Legionnaire alive !”

“Don’t threaten us, Legionnaire ! I’ll burn this ship out of the stars before you take us to a new prison !”

Nothing special is needed, really. He’s integrated pretty firmly into the pre-Crisis Legion of Super-Heroes, but can be used anywhere.

Equipment:
As a member of the LSV, Sun Emperor has access to purloined technology from the LSH, notably a Transuit and some form of anti-gravity flight technology, probably either a Flight Belt or an early model Flight Ring. He has some form of communications technology as well, a telepathic earplug or perhaps a simple radio. See the LSH Equipment write-up for details. 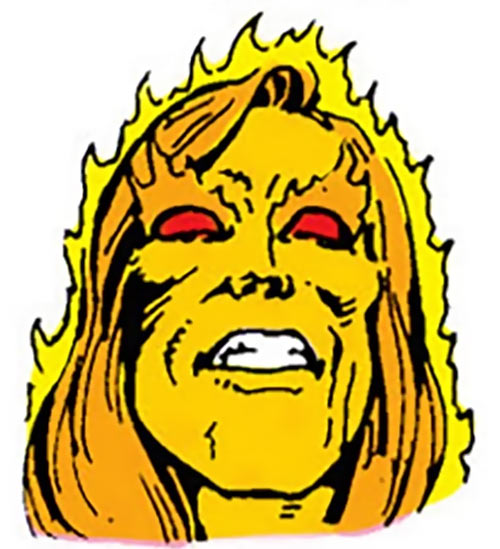 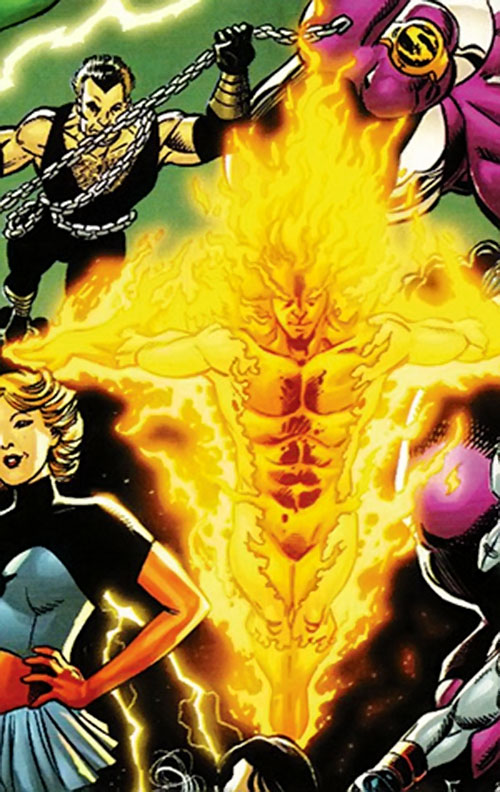 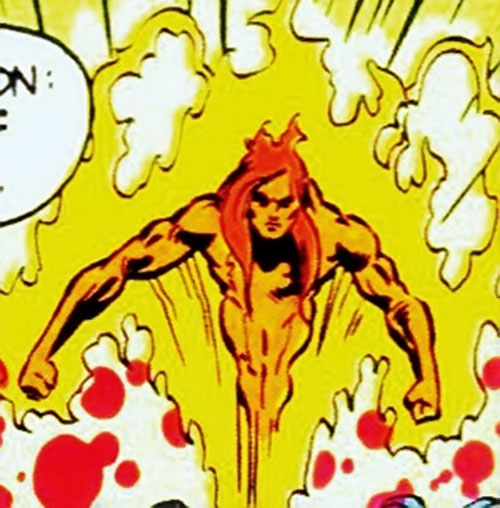 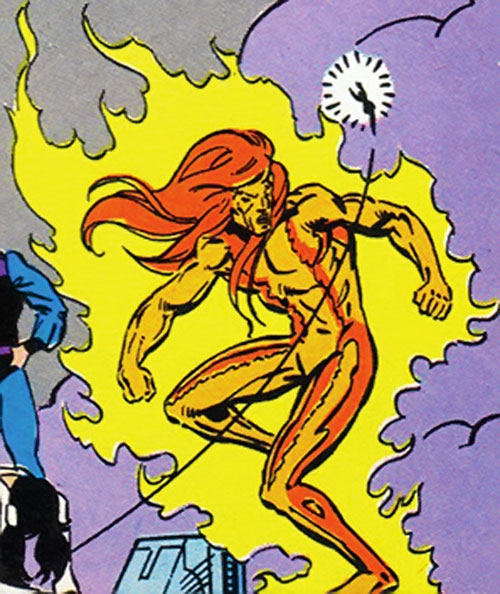 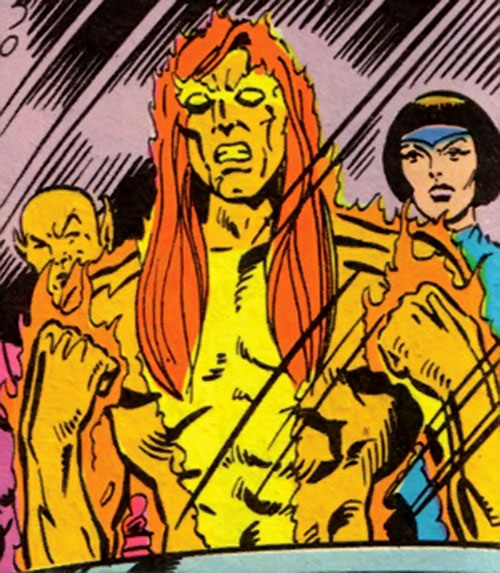 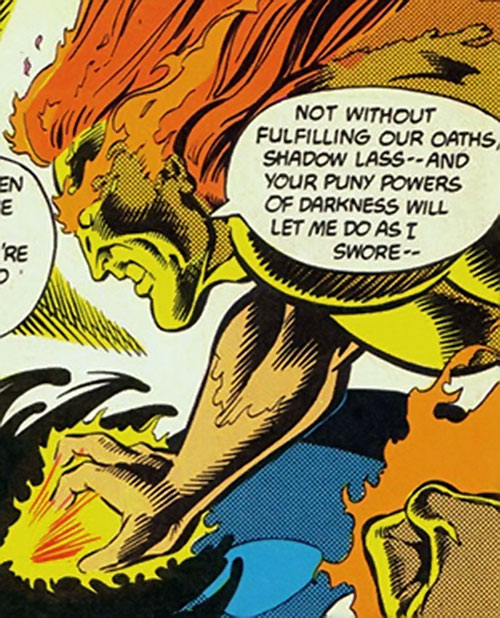 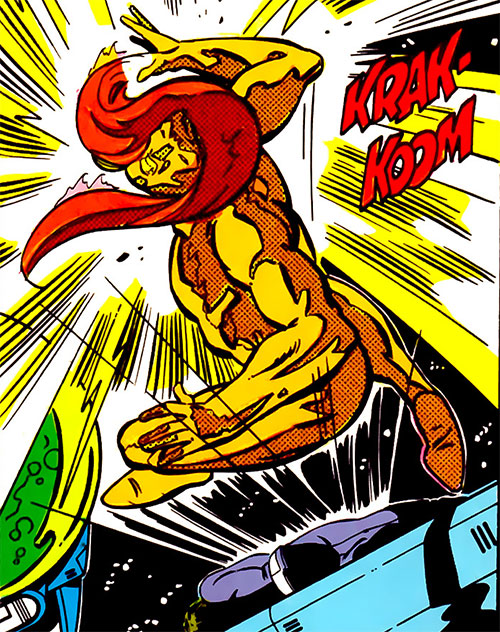 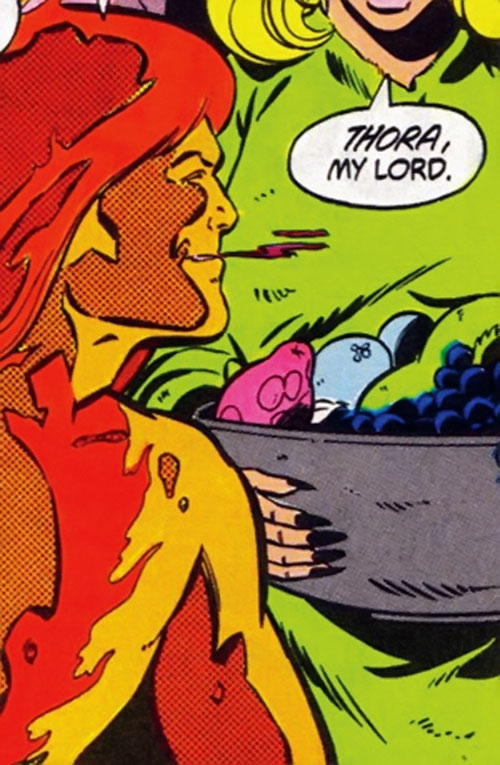 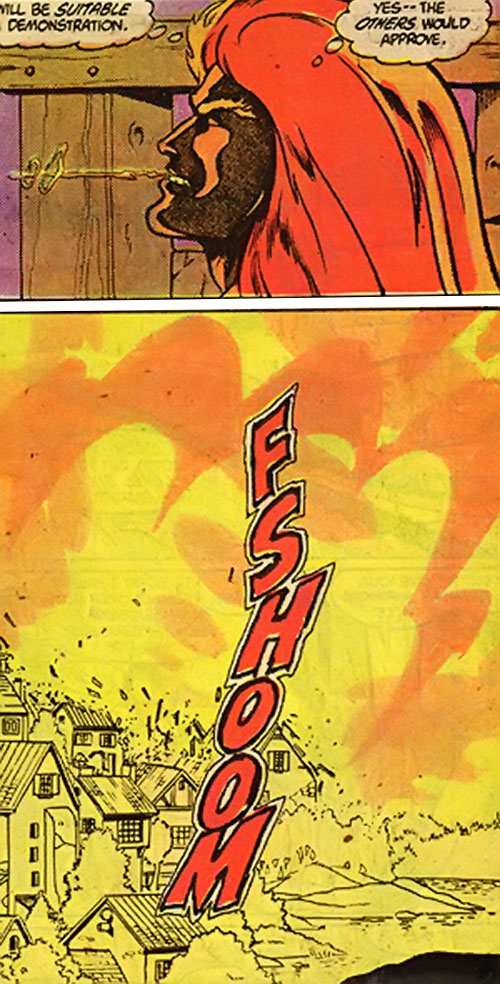 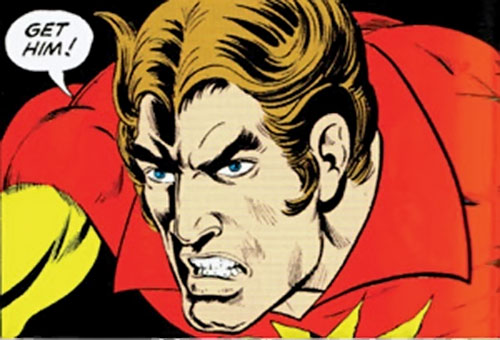 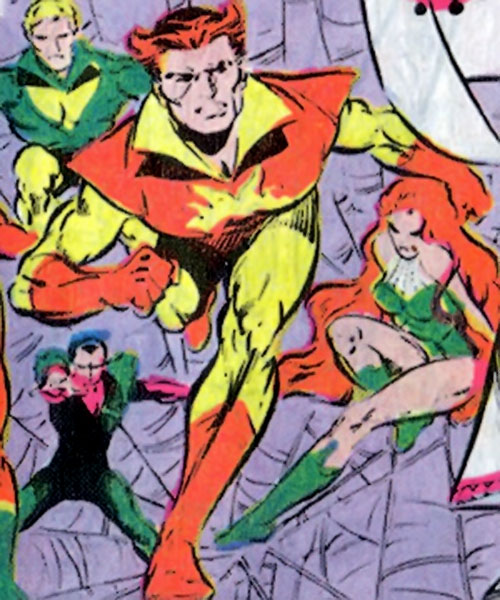