Sunburst’s primary power is the ability to hurl blasts of solar power. These melt steel with ridiculous ease and can devastate a city block in seconds (in DC Heroes RPG terms, Flame Project). He can use this energy to intercept bullets and other projectiles, melting them before they can harm him (Force Shield). He can also generate bursts of blinding light (Flash).

His energies can also be harnessed to provide flight via anti-gravity (Flight). His anti-grav can be used to cause “eruptions” of objects, making money bags fly out of an armored truck and through the air (Gravity Decrease).

He once outmaneuvered and escaped Superboy by diving into the ocean and causing an eruption of the water. This startled and distracted Superboy long enough for him to get away.

Sunburst is not simply an energy-blaster, though. His powers also include great strength and tremendous hardness of body.

Takeo Sato was born in a tiny village within sight of an active volcano. On the day of his birth, the volcano was belching fumes prior to an eruption. He presumably inhaled these with his first breath. But Takeo never knew of any effect the fumes had upon him. He grew up normally.

Then, as an adult, he decided to become an actor. He won the role of a costumed super-hero in a low-budget production by Mifune  Film Studios. Thus, he had to learn to “fly” on wires. When the wires holding him in the air snapped, he experienced a moment of terror. The next thing he knew, he was in flight.

Apparently the fumes from the volcano imbued him with latent super powers. The studio decided to keep his powers a secret. They preferred to release his super-stunts as state-of-the-art special effects. On the strength of those effects, the studio made a number of movies with Sunburst as Japan’s greatest movie hero.

However, criminals discovered Sato’s secret and kidnapped his parents. They held them hostage to force Sunburst to commit burglaries and other crimes for them. Thus, the world was shocked to see a criminal appear displaying all the powers possessed by the “fictional” movie hero. It still remained a secret that the super-villain and the movie actor were one and the same. 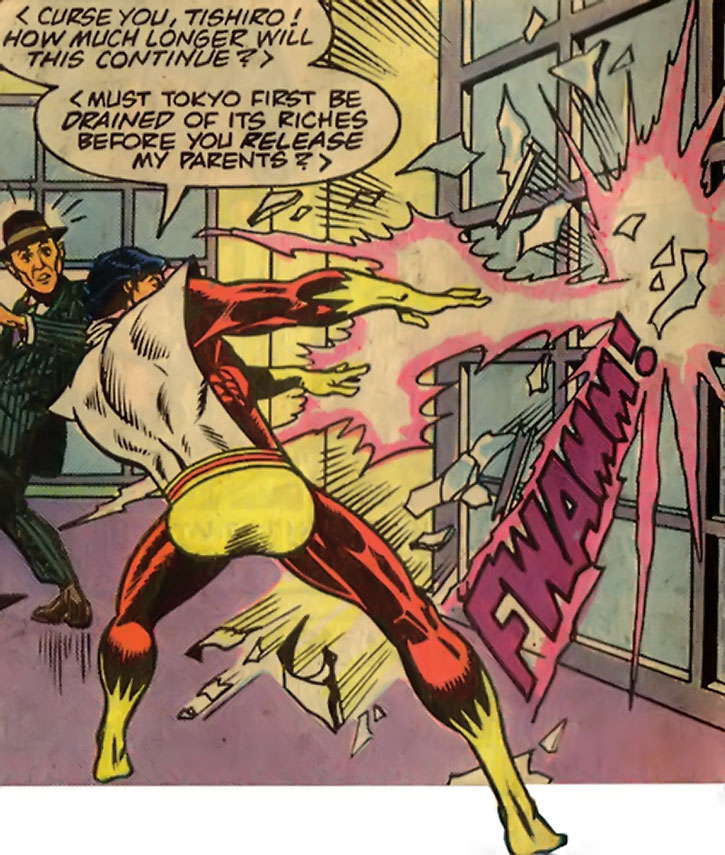 Word of this new super-villain reached young Clark Kent, who was a fan of the Sunburst movies. As Superboy, he flew to Japan to help the police apprehend him. Sunburst proved a respectable foe for the Boy of Steel, making excellent and clever use of the powers he had, even though his overall power level was much less than Superboy’s.

When it seemed that Superboy was going to defeat him after all, Sunburst risked explaining his predicament. He then asked for Superboy’s help.

Superboy’s speed and super-senses allowed him to find and rescue Sato’s parents and capture the crooks. Then, at Sato’s request, Superboy used his super-hypnotism to wipe out Sato’s memory of his powers. Presumably, Superboy did this to the crooks and to the studio personnel as well.

Sato felt that his powers had brought him only misery, and he wished to be rid of them.

Sato then apparently lived a normal life for some years. Then, some unchronicled event restored his knowledge of his powers. This time he apparently was ready for the responsibility they entailed, and became a hero.

How long a career he had is unclear, but he had sufficient notoriety that, during the Crisis on Infinite Earths, the new Dr. Light came to him for guidance. She had formerly been selfish and self-absorbed, but Supergirl’s heroic death in front of her had shaken her.

Sunburst urged Dr. Light to go with Harbinger when Harbinger came seeking aid in the ongoing stuggle with the Anti-Monitor. Sunburst remained on Earth, helping Rising Sun (the Japanese member of the Global Guardians) protect Tōkyō from the Anti-Monitor’s shadow demons. He was killed in the battle, and mourned by Dr. Light II.

An Asian man of excellent build, relatively tall, with black hair and brown eyes and a mustache.

His costume is a striking red bodysuit with yellow boots, briefs, and gloves. The chest is white with raised shoulders and a yellow sunburst on the chest. He also wears a white mask.

For most of his life, Takeo Sato had no real ambition to be either hero or villain. He simply wished to be an actor.

When he did fight he did so with great resolve and ingenuity, but also ruthlessness. He made excellent use of diversionary tactics and, when battling Superboy, did not mind endangering innocents, even threatening city-wide destruction. He also displayed frightening flashes of temper. That was especially true when people he loved, like his parents, were endangered.

Mostly, he was selfish, wanting to live his own life without regard for others except those he knew personally, like his parents. Eventually, he changed, learning that any measure of greatness can only be attained through selflessness.

“Remember that oath to your ancestors. Take it to your black heart. For if you try to cross me, I swear by my ancestors and the souls of my beloved parents, you shall join them !”

“So ! Even knowing of my vast powers, you seek to stop me ? You are brave, I will grant you that – but oh, so very foolish !”

“I have a sacred mission to perform – one that, should I fail, would mean a most horrible thing !”

Dr. Light II: “I…I am so confused. Sunburst, I came to you for advice….”
Sunburst: “I was like you once, Kimiyo…but I changed, as will you. Go with her. I will protect Japan from here on Earth.”

He was basically brought back for Crisis on Infinite Earths to be another casualty. No great loss, since he’s basically a clone of Rising Sun (or Marvel’s Sunfire).

It’s a shame to kill one of our few non-Western heroes, though. Even if he’s not very original. So, have him survive the battle with the Shadow Demons if you want – heck, thrown Sunfire into the DCU too, and you’ve got the beginnings of a high-powered (if non-versatile) Japanese hero team.

Sunburst is mostly interesting for his disinterest in being a hero. Or later, for his role in changing from selfish to heroic, and the inspirational role he can offer to others, like Dr. Light.

Bonuses and Limitations:
Force Shield is only against physical projectiles which can be melted or burned, like bullets (-1).

As with all characters with few appearances, some stats and powers are speculative. Like many writeups, this takes the “Superman’s DEX is 10, although he sometimes uses his Superspeed to make it higher” approach. Superboy, at this point in his career, has a DEX of 07. 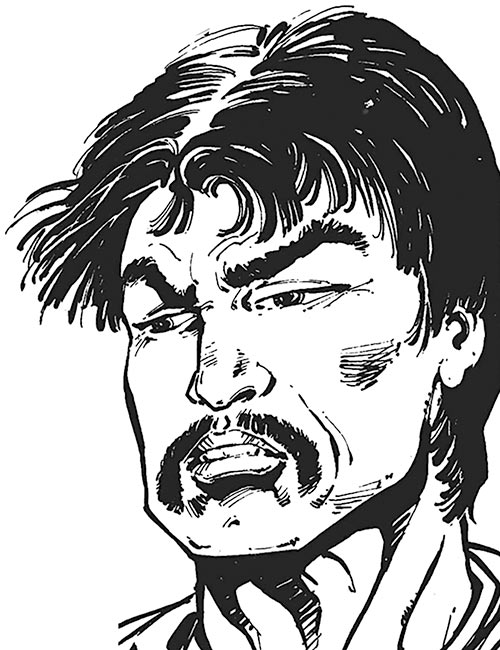 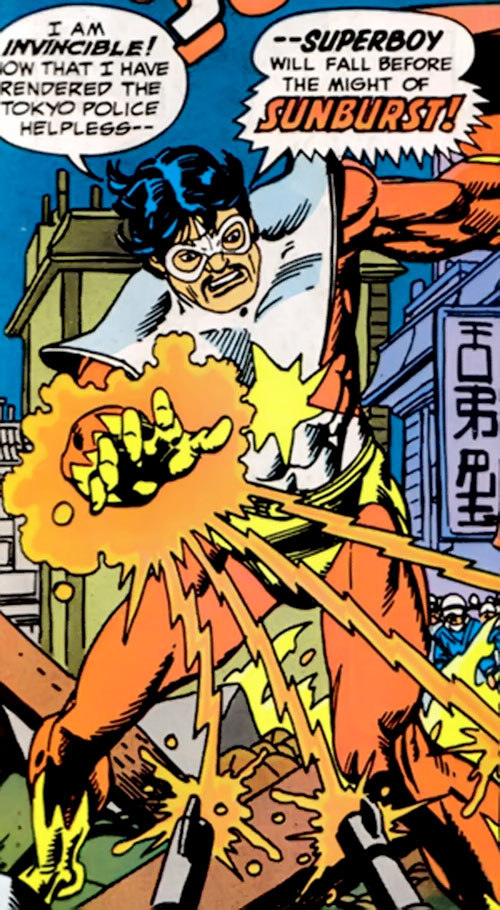 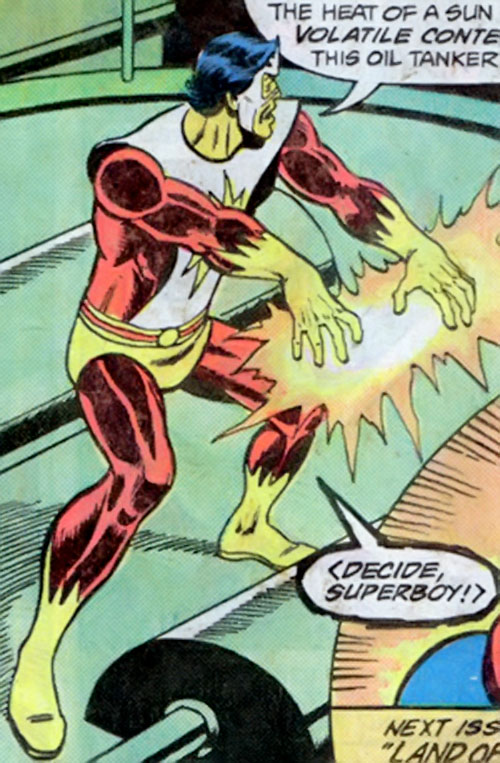 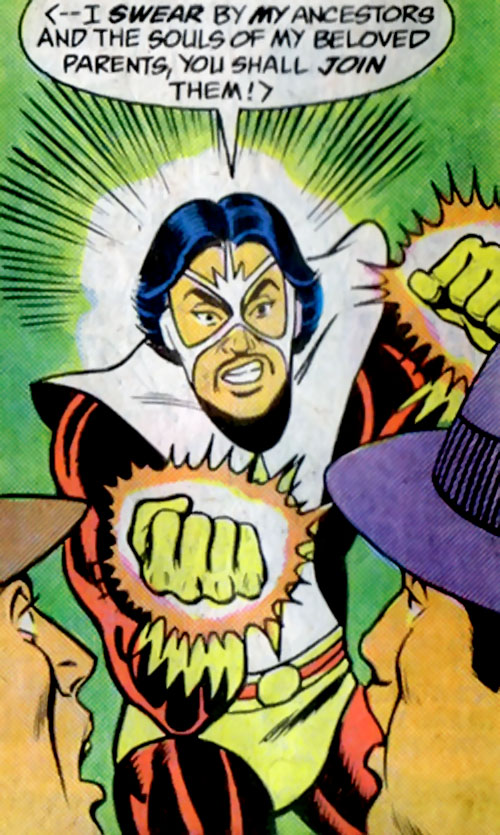