Sunfire can generate tremendous amount of heat and flame, and fly.

Although a well-trained fighter, she’s not a scrapper and prefers to remain aloft at some distance, blasting away and using non-lethal tactics.

Little is known about Sunfire’s native timeline , but we have a rough idea of her life. She was born to a strict and apparently wealthy and powerful couple, and high expectations filled her life – from homework to classical music.

She was raised to be her parent’s image of a proper girl, then married off. Mariko resented that, and rebelled against her parents as she could. This would get worst in her teens.

When she was 12, her mutant powers manifested. Her parents forbid her to explore them, and wanted her to keep them completely hidden and unused. And when she was about 15, she determined she was a lesbian. Things were going rapidly downhill, and she soon fled her family and Japan to go to the purported land of freedom – America.

While there she encountered the X-Men and Charles Xavier, and they became her new family.

However, something apparently went wrong with a part of the timestream. Information started to propagate, that would erase some anomalies but also some timelines. In Sunfire’s case, her powers would have retroactively been altered so she would have started to emit uncontrollable deadly radiations instead of controlled heat and flame.

Sunfire was thus part of a small group of youths from threatened timelines which was assembled by a halfling-like being called the Time Broker. The Broker explained them the above difficulties. He also said that he could send them to alternate timelines to rectify anomalies, and prevent their past from getting retconned  into something terrible.

Sunfire wasn’t part of the EXiles at first. She joined them two days later as the replacement for Magnus, a possible son of Magneto and Rogue from a possible timeline. Magnus had just sacrificed his life to save an alternate, benign version of Magneto.

After surviving many missions with the Exiles, Sunfire finally died at the hands of one of her teammates. Mimic, who had been temporarily possessed by a Brood, killed Sunfire while he fought the rest of the team.

The Exiles eventually became able to return their fallen teammates’ bodies to their home worlds. The exception was Sunfire. She was instead buried on an alternate Earth where she had shared a brief but intense romance with a version of Spider-Girl.

Sunfire’s friend Morph felt this was more appropriate than returning Sunfire to her family, who had bitterly disapproved of Sunfire’s romantic preferences.

Mariko has a piercing across her right brow, but usually doesn’t wear it in her Sunfire uniform. As has been made obvious by several hundred comments from Morph, she’s unusually buxom for a young Japanese woman.

Sunfire is a mostly quiet, private and practical young woman. While she enjoys dating and partying like most twentysomething kids do, she’s not an extrovert.

Due to her past, she dislikes unjust authority and will defend herself against such. But she isn’t the aggressive type either.

Of superheating air for subdual purposes

A common tactic of Sunfire is to superheat the air around her opponents, making impossible for them to breath. This works just like the standard use of Air Control to create vacuums, with two differences – Flame immunity can be added to RV, and this kind of attack deals Bashing damage.

I assumed than nearly none of the persons encountered in alternate realities has any HPs. 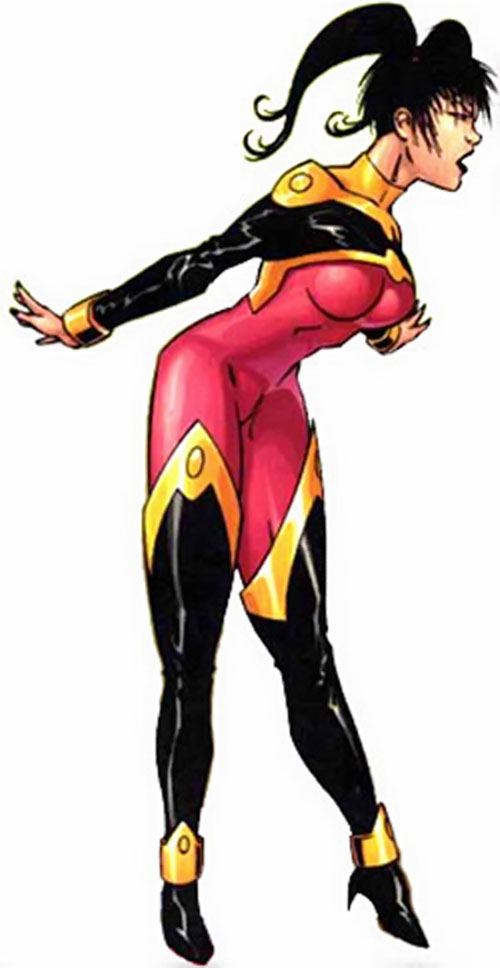