In 1933, a nobody named Jerry Siegel wrote a short sci-fi story called The Reign of the Super-Man, with illustrations by some guy named Joe Shuster. It was published in a mimeographed fanzine they made themselves.

They apparently liked the Nietzsche-inspired “Superman” moniker, and reused it for their next creation. But this new take on a “Superman” couldn’t get a slot as a comic strip, so they ended up selling the rights to DC Comics for $130.

“I can do four things that no one else of this planet can emulate. They are : intercept interplanetary messages, read the mind of anyone I desire, by sheer mental concentration force ideas into people’s heads, and throw my vision to any spot in the universe.

“Furthermore, during the night my mind assimilated all the knowledge that exists in the universe. I know as much about Pluto as its inhabitants whose information I absorbed. I am a virtual sponge that absorbs every secret ever created. Every science is known to me, and the most abstruse questions are mere childsplay to my staggering intellect. I am a veritable God !”

Of course, Dunn undercuts these statements by, immediately after speaking them, asking directions to the library, and needing to read Einstein’s The Expanding Universe. So this is clearly hyperbole.

And, while we never hear anything else of “interplanetary messages,” we do see:

“Not too long ago”, Professor Ernest Smalley, a chemist, secured a meteor fragment from the “Dark Planet.” Analyzing the stone, he detected what appeared to be a previously unknown element. It exerted a strange influence upon the laboratory animals who whom it was administered.

In the early 1930s, Bill Dunn was a down-and-out casualty of the Great Depression on the bread-line. On the promise of a real meal and suit, Smalley recruited him to unwittingly become the recipient of half the slowly dwindling substance.

Upon bringing the poor man home, the professor had his butler clean Dunn. Then he supplied him with appropriate clothes and satisfying food and coffee…laced with the new element.

The influx of either the food or drug made Dunn dizzy. He was sent to sleep, for the first time considering that Smalley might have an ulterior motive. Panicked, the vagrant leaped from the window and escaped.

It’s in your head

While attempting to get as far from Smalley as possible, and in his increasing stupor, Dunn collided with a tree. Unconsciousness allowed his mind to reach out and grasp what was causing his dizziness. Thousands of conversations were whispering in the back of his head. Willing the din to stop, Dunn got his desired silence.

Intrigued, he experimented for a moment. He learned that his new sensory acumen extended to clairvoyance, as well, allowing him to see at least as far as the surface of Mars, and a fight to the death between two of the beings who lived there. And then, the vision passed, and William Dunn slept.

The next morning, Dunn was filled with confidence in his newfound abilities. He walked to the library to read up on the advanced sciences, only to find the state of the art woefully behind what he needed. But he was able to content himself with embarrassing a physicist seated next to him.

The event almost forgotten, Dunn turned his attentions to making money. He convinced two men to give him money, and then, applying his ability to see into the future, made a fortune overnight at the racetrack and stock market.

I’ve got the power

Money in hand, Dunn returned to visit his “benefactor,” Smalley. He came in time to prevent him from taking the same serum that had so transformed the former vagrant. After a long scuffle, Dunn also managed to kill Smalley.

With his only potential rival out of the way, Dunn began his plan to destroy the world’s militaries in a massive conflagration. He set the ambassadors to the International Conciliatory Council’s peace conference at each other’s throats. Then he forced hate upon the actual militaries all at once.

And then, all at once, it was all over. Or, rather, would soon be over. Dunn had a flash of the future, and learned that his drug would wear off within the hour. A quick calculation showed that he had no chance of reaching the Dark Planet—and, thus, a source of the mineral he required to maintain his Powers—within that hour.

Crestfallen, he realized that he might have achieved a form of immortality had he worked for good. But he would now would find himself back in the bread-line come evening.

With that, Dunn walked off, prepared to rejoin his down-and-out associates on the bread line.

However, the art accompanying the story indicates a bald man with a visible temper.

Dunn at his peak is, in the words of a reporter, “a queer type. He is exceedingly alert, snaps back answers almost before questions are completed. But he has an overbearing conceit that is almost stifling.”

On the other hand, it is entirely refreshing to see a brilliant villain who makes a ton of money using relatively mundane (and, thus, highly proven) approaches.

Without his abilities, Dunn seems like a nice enough guy, though, despite being down on his luck. In fact, he takes the loss of his abilities at the end of the story with no small amount of dignity. He merely walks off, knowing that it’s over, and realizes that his evil approach might have been counterproductive.

Clearly, though, Dunn isn’t bright enough to maintain his fortune without his abilities, since he abandons it as quickly as he abandons his powers.

“Somehow it’s hard for me to believe that you’re doing this just out of the kindness in your heart. I’ve received too many hard knocks, I guess.”

“If I had a ray-tube within reach, I’d blast you out of existence !”

“It all depends on the drug. If I can give rise to this power, nothing can stand in my way toward universal domination.”

“I am about to send the armies of the world to total annihilation against each other.”

There’s a fairly good chance he’d have to change his name. Which is fine, since only the narrator calls him The Superman. But there’s no reason he couldn’t be introduced.

(The title has “Super-Man” with a hyphen, but the text says “Superman”. For the title of this entry I use the hyphenated form, since it helps telling this guy apart from Clark Kent — Ed.).

I think we’re all agreed that the “Dark Planet” would almost certainly be Krypton, despite the nuisances of figuring out how kryptonite got to Earth so far before Kal-El’s ship.

Alternatively, it could be the version of Nth Metal that existed in continuity during the early 2000s. The ability (shown or described in JSA) to hold and transmit Thanagaran racial memories, controlling the forces of the universe, and emotional control seem oddly close to Dunn’s abilities.

Dunn’s powers would have faded long before the Golden Age  starts. But they might be a recurring phenomenon, and he might have menaced the All-Stars or the Seven Soldiers of Victory. Or, perhaps, “Iron” Munro in a solo adventure (which has a certain elegance to it, if you think about it).

With his information-gathering and controlling abilities, he makes an ideal manipulator from behind the scenes, able to always return to plague the heroes…unless he gives up.

Along similar lines, if Dunn’s intellect were to return, but not his powers, he might make a good replacement for the Golden Age Alexei Luthor. Who, indeed, tried to precipitate World War II, though under Hitler’s command. Or the original identity for the Ultra-Humanite (who shares in Dunn’s penchant for ranting about his abilities).

Or, if a direct connection isn’t desirable, the story does leave open the fate of the remainder of Smalley’s serum, as our contributor Jay pointed out.

Additionally, a child or grandchild might have a similar condition, and, developing a helmet to regulate the ebb and flow of power, become the JLA foe, Brain Storm.

Drawbacks:
Minor Power Burnout (should one Power or Skill go, they all go, and cannot be restored without taking more of Smalley’s serum).

Source of Character: The Reign of the Super-Man, by “Herbert S. Fine” (a.k.a. Jerry Siegel). 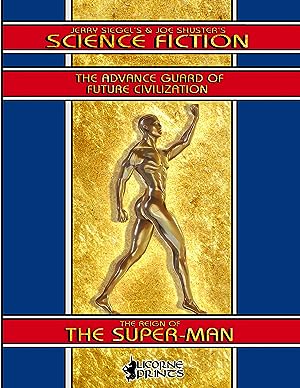 Books by (or about) Siegel & Shuster.
Advertisement