He and his sidekick’s backstory include a reference to the 1950s moral panic about Batman and Robin “promoting homosexuality”. Their names are a flip-flopped version of the actors playing Batman and Robin in the hugely successful Batman & Robin serial (Adam West and Burt Ward).

The classic Super-Tough had the strength, stamina and speed of a human in peak condition. During the years on DarkWorld he also became a master of tactics, electronics, flight, survival and weaponry.

The struggle has strengthened his resolve and focus. This is one hero who won’t back down ! He’s super-tough !

The veteran hero Super-Tough had patterned himself after the veteran superhero Super-Patriot. Super-Tough set himself up as an every man hero and fought crime as best he could. He had a fairly successful career in the city of Chicago, starting in the late 1960s. He was partnered with his sidekick, Young-Tough.

The duo battled a number of villains with their main nemesis Damien DarkLord, a time-travelling mastermind. Around 1980, the heroes had their final confrontation with their enemy. It ended with the detonation of a Nega Bomb. Super-Tough and Damien DarkLord disappeared in the explosion, leaving the teenaged Young-Tough alone.

The two missing men reappeared on a parallel Earth. Over the next 15 years, DarkLord took complete control of the planet and rid the world of all possible rivals, save Super-Tough. The ultimate survivor managed to form a rebel army that could not be wiped out.

When DarkLord attempted to transfer portions of his “Darkworld” with that of the original Earth, the Special Operations Strikeforce opposed him. The SOS and Super-Tough joined forces to eliminate the dictator. Then they returned to Earth, leaving Darkworld to explode.

Super-Tough went to check up on his former sidekick. He was shocked to learn he had become the homicidal vigilante Mace. The duo also revealed that they had been lovers.

Super-Tough was later abducted by OverLord II. He was kept beaten and chained beneath his headquarters so that the armored villain could recruit Mace for his forces. OverLord II had lied and stated that Dragon murdered the missing Super-Tough.

After the death of OverLord II, Super-Tough was released and recovered from the experience. He accompanied the SOS on a mission to the Dark-Lands in Florida.

Super-Tough was ultimately incinerated by the alternate version of his arch-foe, DarkLord II.

Super-Tough wore a purple Kirby-esque military uniform. It had eagle insignias on the shoulders and with added superhero paraphernalia. This included high, red boots, a large metallic belt and armbands, a headpiece, a jetpack and a blaster gun. His entire left leg seemed cybernetic.

His face was visible, still with the square jaw. It was heavily scarred on the left side, and the left eye was covered by a black eyepatch. The eye was lost when DarkLord once mentally ordered Super-Tough to shoot himself.

Super-Tough is a classic, non-powered, athletic and trained superhero. Apparently, he felt the world needed more heroes. So he opted to become an everyman hero, patterning himself after the legendary hero SuperPatriot and fighting crime in all its forms.

Starting his career in the late ’60s, he upheld all the great ideals and spoke in the bombastic manner of Golden Age heroes.

Partnering with his sidekick, Young-Tough, he fought the great fight against superpowered opponents for several years. He eventually, became the archenemy of the mighty and time-travelling Damien DarkLord, a challenge that few normal men could have overcome. Super-Tough is as his name implies, perhaps, the ultimate survivor with an unusually intense focus and resolve.

while exiled from his native world, Super-Tough adapted to the situation against all odds. He became the leader of a fairly successful underground movement against the new leader of that world, Damien DarkLord. He had to start using weapons in his struggle.

Having fought DarkLord for so long, both his dreams and fears circulate around his arch enemy. He struggled so that one day he would end the threat and save the world so that everyone could live free again.

All in all, Super-Tough had fought longer and harder than most other heroes. Over the years, he had to repair damaged limbs and the like using cyborg technology. Still, this did not still his resolve, and he eventually seemed to develop enough willpower to be immune to DarkLord’s mental commands.

While rough against the villains, he was a good friend and a willing ally of other heroes. He never let grief overcome his optimistic, adventurous attitude.

During his early days as a hero, he had become very close with Young-Tough. They eventually began a romance. They used to talk about personal things in the middle of combat. Upon being exiled to DarkWorld, he believed that Young-Tough had died in the original Nega Bomb detonation.

Much later, as he found out that Young-Tough was still alive. But he had been disfigured in the original Nega Bomb detonation, and had turned into the ruthless vigilante Mace. This devastated devastated Super-Tough. He had hoped for his former sidekick to grow up into a full-fledged hero, by joining Youngblood, and, instead, he life had taken very tragic turns.

Adam Ward saw little choice except to take a fond farewell of his former sidekick as he visited him in prison. Super-Tough was again able to overcome hard facts and continued the fight of the classic hero, now hardened into a veteran.

Once back on normal Earth, he had trouble finding drive and purpose. There is no place on Earth for a warn-torn hero, and Super-Tough strives on opposition. He jumped at the first opportunity to return to DarkWorld, or bits from DarkWorld, to be challenged and to feel alive.

“They must be after the Nega-bomb, Young-Tough ! We’ve got to stop them at all cost !”

“Don’t do anything stupid, DarkLord — or I’ll blow your brains out !”

“Our biggest advantage is the element of surprise. The demon dogs don’t know that I’m here on this Earth. They don’t know you have your own personal tour guide ! Race — go.”

(In the Dark-Lands in Florida) “This world is so different from the one I left. I’ve been wandering aimlessly — in a daze — without a drive or purpose. I’ve been kicked around, kidnapped and mistreated. It seems there’s no place for a war-torn hero on this planet. Yet here, amidst the remains of my home world I feel challenged — alive ! This is my purpose ! This is my calling !”

Super-Tough, classic hero of the 60s

During the 1960s, as Super-Tough had just started his career, he was not yet the great veteran he later turned out to be. He seems to have often worked with the US Government and the US Military and thus had Low Level Connection to both, as well as Credentials (US Government, Low). He likely knew SuperPatriot as well.

Not yet toughened up by his experiences on DarkWorld, his WILL, MIND and SPIRIT Attributes were all set 2 APs lower, and he did not have the Gadgetry, Scientist or Weaponry Skills at all. His HP total was set at 70, and the classic Super-Tough did not, of course, have any Area Knowledge, Scholar, Forced Exile, MPR or Connection to Rebel forces.

However, the younger Super-Tough had a DEX score one full column shift higher, including the Linked Skills, and his STR was a full 5 APs. His Motivation during this time seems to have been Thrill of Adventure / Upholding the Good. 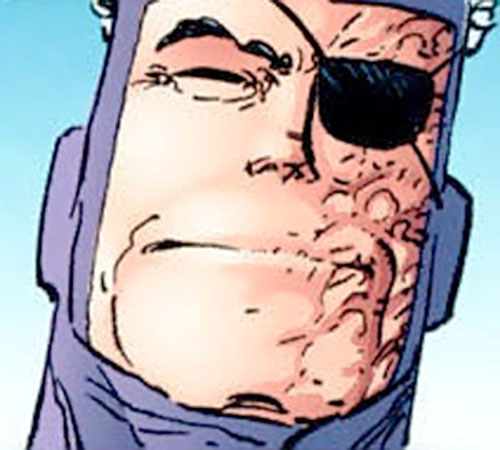 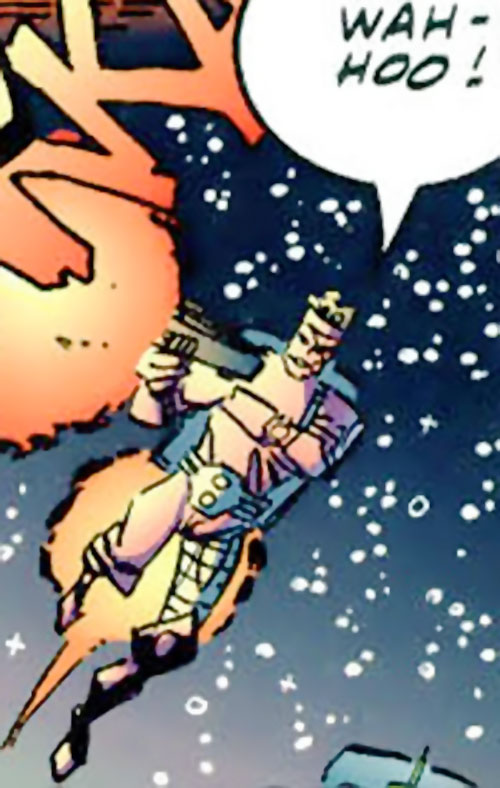 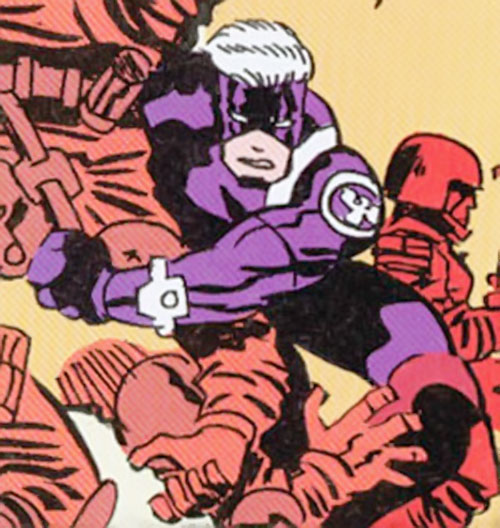 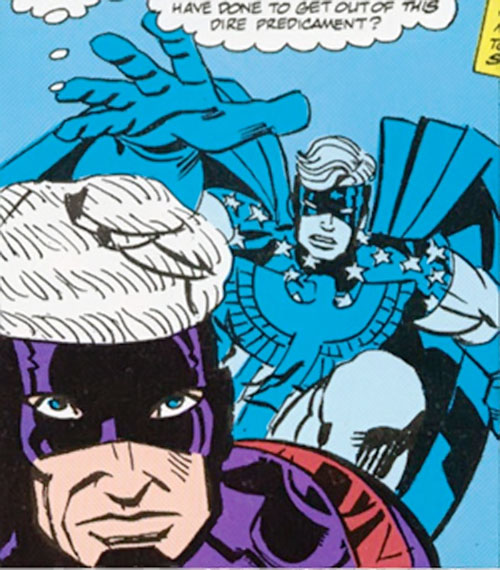