The Earth of Futures Past

The intervening half-million years has not been kind to the Earth. After many disasters, the planet’s mass has been severely decreased and the surface almost entirely molten. What few cities remain under the orange sun float miles above the surface, moored in place to the remaining solid ground by chains.

Moreover, the planet’s mass is unstable, with quasi-mascons  — regions of higher gravity — drifting around the molten surface.

The practical upshot of all this is that Kryptonians suffer a significant decrease of all Powers and Physical Attributes (in DC Heroes RPG terms, -8APs to all). The Flight Power is actually increased by 5APs and is not only far more difficult to control but gains a Serious Burnout. The latter is an effect of the higher-gravity mascons across the surface.

Some other effects may be specific to other Kryptonians, such as Supergirl finding an impressive boost in Super Breath (particularly in its cooling applications) and Superspeed.

The Supergirl of the 5020th century is strong and durable like any Kryptonian . Yet, likely genetic dilution and a distinctly different environment seem to have limited her abilities in the extreme. She is relatively strong, fast, and durable. In her home time and in the 20th century, she makes ample use of her Super-Hypnosis.

And, while she does not have such abilities in the future, the solar energy of the 20th century grants Louise a strong ability to see through objects (X-Ray Vision) and some slight Heat Vision.

There are, however, problems. Such as Louise’s frequent inability to control her own strength and force of landing.

Noteworthy might be the fact that, despite being something of a nobody with an unbelievable story, Louise managed to convince both Superman and Supergirl, at different times, to help her. She even convinced Kara to take her place in the distant future.

Presumably, this indicates some interpersonal ability (Charisma). Though it seems like it’s not out of the question for her to be using her Super-Hypnosis off-panel .

Two years ago, by Louise-L’s reckoning (though far in our future), an incarcerated criminal scavenger named Tal Belok located a Time-Viewer. He found it in a laboratory once belonging to Rond Vidar in the 30th century.

Using this device, he opened a timewarp to the 20th century. He used the warp to deliver matter-transmutation equipment of his era to Virgil Belasco, an ancestor of his. Belasco used them to become the villainous Toxus.

Louise-L, finding many of her powers to be weakened by the 20th century environment, sought out Superman. With his help she knocked Toxus unconscious so that he could be transported to the future to be imprisoned with his confederate.

However, things did not go entirely as planned. Toxus was imprisoned in the future (where the lack of pollution nullified his powers) and Belok was imprisoned in the 20th century. Howbeit, an explosion disturbed the force fields trapping Belok. That allowed him to switch places with Toxus.

Back into the past

And so Toxus escaped back to the 20th century, with Louise-L pursuing close behind him. But the future Supergirl did not follow closely enough.

That was because she stumbled upon the “local” Supergirl in her search for clues about Toxus. The villain had just fought her and claimed to recognize her. Not being able to see in the low light under the building, Louise-L struck Kara. Yet she managed to regain control of the situation and convince her predecessor to switch places to pursue Belok in the future.

Her next act in the 20th century was to accidentally reveal Supergirl’s identity as Linda Danvers to soap opera writers Herb and Marian “Mitzi” Silver. Louise-L hypnotized them into forgetting what she told them while discussing future scripts. In this way she could get rid of them so she could pursue Toxus again.

Finding him, the future Maid of Might managed to use his cybernetic control of his equipment against him. She could thus imprison the villain anew. Trading places once again with her “sister from the past,” Louise-L took the opportunity to hypnotize Kara into forgetting the events entirely before returning to her own life.

This Supergirl of the future wears a blue body-stocking with the Superman insignia on her chest, red cape, boots, and gloves, and a yellow belt with a diamond-shaped buckle.

Louise-L herself is a tall, slender woman with short-cropped blonde hair. She otherwise appears to be the spitting image of Kara, being able to pose as Linda Danvers for an unknown duration.

Louise-L is something of a cipher, really. She speaks as formally and awkwardly as a stereotypical superhero, granting pardon and daring to do.

She is also quick on the (metaphorical) trigger regarding her super-hypnosis. She wiped the memories of Superman, Supergirl, and at least two 20th-century humans with barely any chance to grant or deny permissions. Her dialog suggests that this is a matter of course in her own time.

Interestingly, Louise seems to be a bit “behind the times” in her own era. She’s apparently relying on factory worker Lydia-T for presumably public information on current events like the escape of Tal Belok.

“Now savor well your taste of freedom, Toxus… for it shall in truth be brief — What is this— ? By the floating cities, you are not Toxus ! Grant me pardon, my sister. My eyes, unaccustomed to this dark, mistook you for one other.”

“I dare not answer that. What future awaits you must be yours to discover without foreknowledge. Now, behold : within this structure exists a time warp. It links our respective eras, and was created by an outlaw in my time-period.”

The far-future Supergirl is probably not incompatible with the current Kara Zor-El’s potential progeny. She could probably also be descended from any number of other Supergirls or Wonder Women/Girls without much loss in concept.

It remains to be seen whether the current (as of this writing) iteration of the Legion of Super-Heroes will have a Rond Vidar who might create the devices to be used by Tal Belok. Though one assumes that any Linear Man might be a viable replacement.

However, based on the structure of the story, it seems to be a safe bet that an earlier draft relied more strongly on the 30th century, perhaps making Rond Vidar less replaceable.

Bonuses and Limitations:
Hypnosis takes a +1CS Penalty to OV/RV if used without a “focus,” like a shiny gemstone or polished doorknob.

Drawbacks:
Secret Identity, MIA (Not Knowing Her Own Strength), Misc (Presumably, Louise-L is vulnerable to kryptonite and magic and the like, but no evidence could be found either way).

Like all Kryptonians of her timeline, Louise-L’s powers vary based on solar radiation and force of gravity in her environment. It is possible that air pollution enters into this equation, as well. Thus, her abilities as outlined here are for her appearances in the late 20th century.

The GM may feel free to adjust any power levels up or down (or even remove entire Powers, such as her vision Powers, which she does not have in her native time) as desired in any given century. 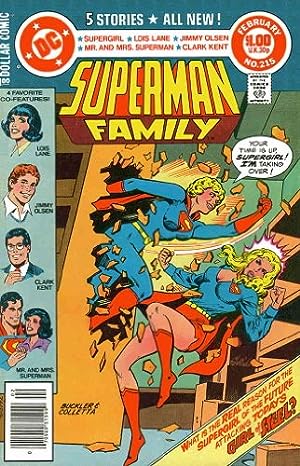 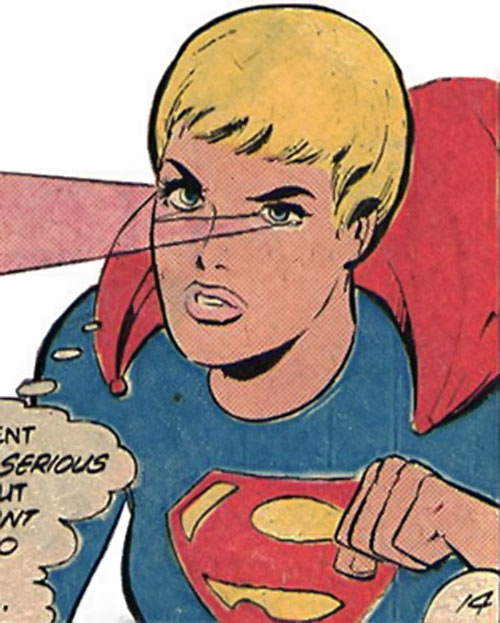 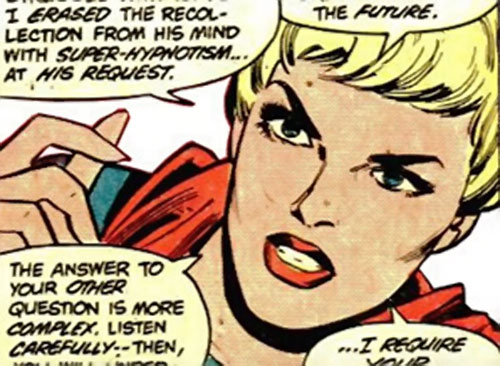 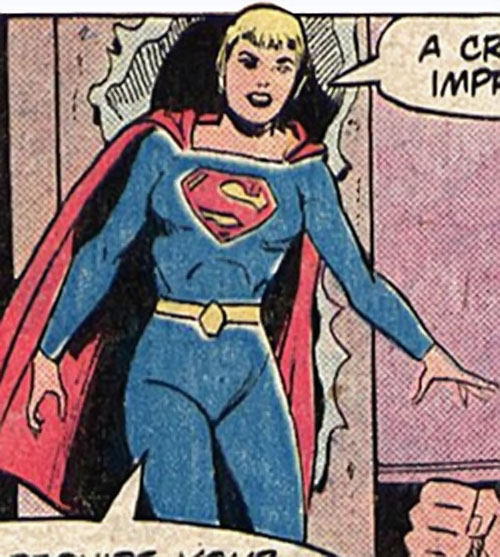 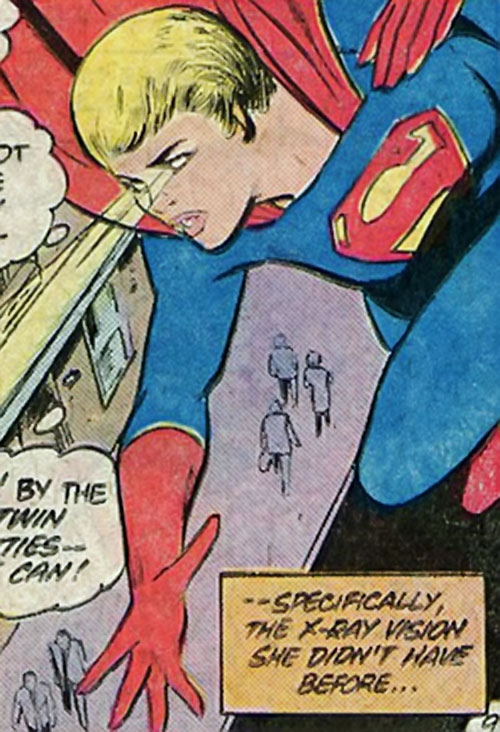