Superlass appeared in 1969, in an issue of Superman’s girl friend, Lois Lane (yes, that was the series’ title). We wrote her up as part of an arc of obscure characters who are sort of, kind of “Supergirls” (that is, young super-women with close ties to Superman and an heroic identity).

This story, like most in this writeups arc, was an “imaginary tale”. That is, it is not part of any continuity and is a stand-alone story about a possible future for Superman and Lois Lane. Where they have a daughter named Lisa, which is whom this profile is about. 🙂

As usual, height and weight are guesses, but even moreso than usual, here. Lisa is rarely the same height with respect to her mother, making it difficult to even make that guess. I picked a single panel towards the end (assuming that the story could have played out over several years) when she’s standing upright next to Lois, and went with that.

While I think it is unlikely, there is a slim possibility that Lois retained her maiden name in marriage, never knew that she married Clark Kent, and that Lisa’s family name is also “Lane.”

The main reason I doubt this is the scene in the maternity ward where Superman is passing out cigars “on behalf of his friend, Clark Kent.” Even Lois isn’t stupid enough not to notice that Superman is claiming it’s Clark’s kid…

Superlass is strong enough, with effort, to catch an out-of-control flying saucer and land it safely, all in flight.

She can also see phenomenal distances. Her sight ranges at least from an unknown location in a tropical climate to the North Pole and the Fortress of Solitude.

Years past, at a charity carnival with Superman, Lois Lane threw herself into a deadly ray aimed at the Man of Steel by some thugs. While Lois sustained no injuries, she was blinded by the raygun.

Pitying the poor girl he loved, Superman snapped into action after hauling off the gang. He twisted the raygun’s metal into a ring (which he claimed to have with him all along) and proposed to the girl reporter on the spot.

The two married, though the nuptuals were kept secret, presumably to keep Lane out of danger. The marriage was handled in another state, with Lois never being aware that she married Clark Kent, and a dream house was built for her on a deserted beach, probably out of the country.

Lois was an inept chef, though, particularly without her sight, so Superman at least had the decency to build her a system of robots to do the actual preparation work while she commanded them in braille. A man of steel has gotta eat, after all.

Presumably, Lois was eventually cued in on the secret, as Superman passed out cigars for his “friend” Clark Kent and his son-to-be (yes, Superman was loitering around the maternity ward with a box of cigars. I don’t write‘em…), only to find out that…his new son was a girl !

Lisa, at birth, was able to stand, jump at least a foot off the ground, and spoke fluent English by the time the family made it home. Within a few years, she was able to stop and throw a rampaging bull over a fence.

And then… Superman left to save the sinking ship Atlantis, carrying nuclear materials for the American government. However, unknown to Superman, the fissionable material in the warheads was traditional radioactive elements blended with both red and green kryptonite. And, apparently, the warheads were unstable, as they detonated with Superman trapped in the ship.

At home, a teary-eyed Lois declared that her daughter would carry on her dead husband’s work as Superlass. While Lisa went out into the world, Lois herself became “the woman in black,” an anonymous mourner at the side of Superman’s grave for several years.

Then, one day, as Lois was whiling away the hours on the beach knitting, a mysterious beast-like man came out of the water. He attached himself to Lois, subtly romancing the blind woman despite his appearance, yet knowing that he could never be with her and her daughter given his appearance.

Naturally, the misshapen man (who turned out to have strength enough to throw a jeep full of bank robbers into the ocean) was Superman, suffering from kryptonite and radiation poisoning.

While their relationship was continuing, Superlass encountered and saved the lives of aliens from Galaxy X-1. They were seeking out illnesses and injuries to learn to heal. Lisa accepted a cosmic ray oculizer from them, hoping to restore her mother’s sight.

While happy, the shock in his wife’s face drove Superman to flee, first the property, then soon the planet. He sought out an uninhabited planet to hide his face until death eventually comes.

Superlass took off after her father. She hoped to trail him in secret to find his ultimate destination, then scour the universe for an antidote to the kryptonite that caused him so much trouble.

Lois could only hope that she would see her family again as Lisa flew out of sight.

Superlass appears to be a young girl, probably 13 or 14, with long dark hair in pigtails.

She wears a fair approximation of Supergirl’s original uniform, a miniskirted blue dress with sleeves that only pass just beyond her elbow, of course with the Superman insignia on the chest. This is belted in gold, possibly a chain of some sort, and otherwise accessorized with a red cape and boots.

The boots have a small heel and the legs are slightly oversized, producing a wrinkled effect.

Superlass is a go-getter who is devoted to her mother and her father’s memory.

As part of her public persona’s “routine,” she uses a rather large amount of irrelevant slang and informal grammar. At home, however, she seems to speak clear, standard English.

“Don’t move ! Everybody stay in your groove ! Keep your heads down, everyone, this is going to be a bash !”

“You certainly aren’t one of the love people, are you ? Here comes the law to help you cool off in the cooler !”

“Oh, if only you could (cure all ills) ! My mother is blind. A cure is beyond the reach of present Earth science…It’s worth the chance ! Nothing has helped her so far. Goodbye—and thanks—until we meet again !”

“Great comets ! He flew straight to the Fortress of Solitude. But only Supergirl and I ever go there…since Daddy died.”

Nothing particularly innovative comes to mind, but Lisa is a fairly entertaining character and would have fit in well with any incarnation of the Teen Titans.

By placing Superlass in that position (and changing the 21st century to the 31st, assuming a typo), this hypothetical team could be treated as a catch-all for Legion characters who never quite fit into continuity or were never quite seen in their prime.

For membership, such a team might draw from the v4 “L‘il Legion” and children of the “Adult Legion,” even if few of those romances ever survived to adulthood. Lauren Gand, the daughter of Laurel Gand and Rond Vidar, of course, might also be a possibility.

Drawbacks:
Age (Young), Misc (Probable weaknesses to kryptonites, magic, non-yellow suns, et al; other precedent suggests that they won’t be exactly the same as Superman’s, since she’s half-human, so the GM is free to wing it)

Comprehend Languages is a hypothesis based on how quickly Lisa began communicating (in English) with her parents. It is possible that this might have another cause, and it is equally possible that the Power has diminished or vanished with maturity.

Lisa’s flight speed is entirely unknown, but she at least believes that she will be able to keep pace with Superman’s escape. I went for a lower number, consistent with her documented adventures, and assume there are some sort of acceleration rules in effect for space travel, which will allow her to follow the Man of Steel.

While tempting to give the Teen of Steel X-Ray Vision, because she was able to see inside the Fortress of Solitude, earlier, when it would have helped with the flying saucer, the thought never even crossed her mind. Nor could she identify her father when confronted with him.

To me, this implies that she does not have any visual Powers beyond Telescopic Vision, and possibly looked inside the Fortress with clever use of reflections. 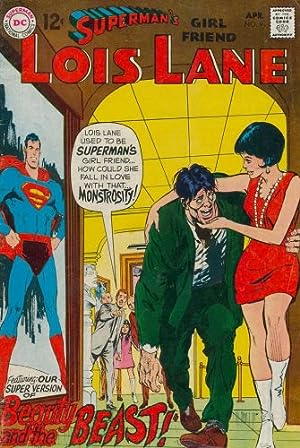 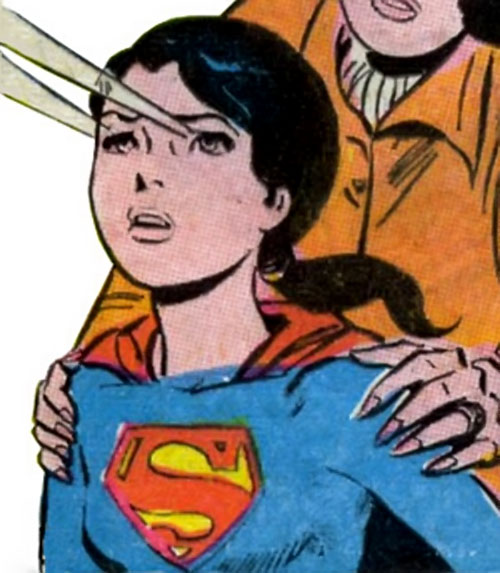 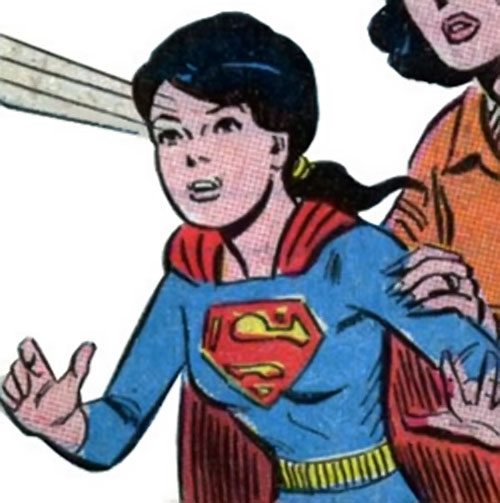 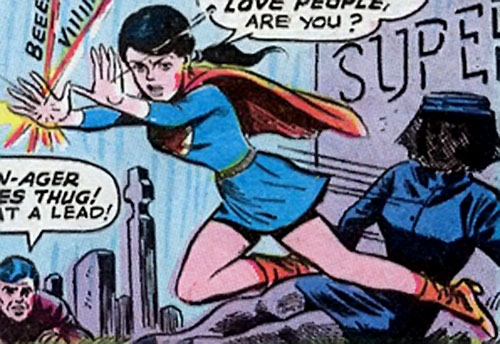 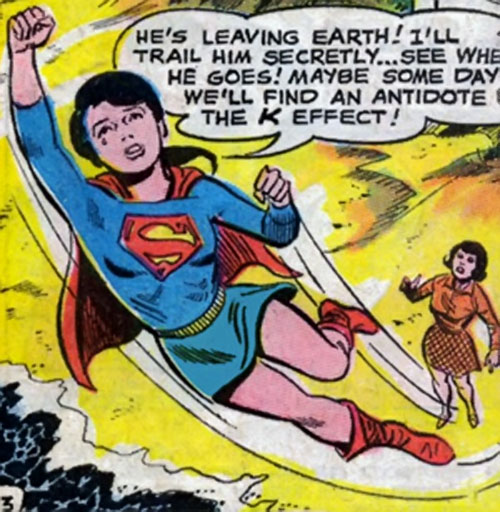