Supermaid is the daughter of Superman and thus has abilities which at least parallel his. While there may be more than shown in this one story, Lola can at least:

Beyond that, Lola apparently has a strong enough personality that even Jimmy Olsen, Jr., who all but despised her originally, fell to her charms (AURA). Perhaps related, Lola seems better than one would expect at hiding her emotions and secret information (Actor).

Many years from “now,” Perry White had retired from editing the Daily Planet, promoting Jimmy Olsen into the vacant position. Lucy Lane, sister to Lois and airline stewardess, married him shortly thereafter.

Likewise, Clark Kent and Lois Lane had married. Lois retired as a reporter, but Clark retained his job at the Planet so he could better perform his Superman feats in secrecy.

Not long after, Lola Kent was born to the Kents, and James Olsen, Jr., was born to the Olsens. The Olsen boy grew up to be a rocket ship pilot, expertly guiding the Starbright around the solar system.

The younger Olsen was quite happy with his lot in life until the eve of the Daily Planet Dance. His father informed the boy that not only was he attending, but that he had to invite mousy “drip” Lola Kent as his date. She said yes, much to little Jimmy’s chagrin.

However, unbeknownst to the Olsens, Lola Kent was in reality Supermaid, who assisted her father Superman in his crusade against crime ! She, of course, inherited her powers (as the caption helpfully exposits in contrast to her mother) because Lola inherited the dominant hereditary traits of her Superman father.

Lola was also ecstatic at the chance to spend time with her childhood crush, despite her father’s chagrin.

Clark, of course, was concerned that, like his marriage, any marriage Lola might have to a human would be overshadowed by the fear that might come from an arch-villain learning of the relationship and therefore attacking the Kryptonians through their spouses.

His fears, howbeit, would seem to be unfounded as young Jimmy spent most of the dance ignoring the girl, raving to his friends about Supermaid, who had just saved him from an atomic explosion.

However, a few dances later (at the insistence of his father), and Jimmy had fallen victim to Lola’s personality. And so the two began dating… with Jimmy spending the overwhelming majority of the time talking about how wonderful Supermaid was until Lola finally took a stand and demanded he pay attention to her. Shortly thereafter, the two were engaged.

And just as quickly after, the engagement was off, when Clark and Lois refused consent. Jimmy left, distraught, while Clark explained the issues to his daughter. Lola was sad, but understood that it was for Jimmy’s own good.

Jimmy, of course, knew none of this, and probably wouldn’t care. Thus, after a few days, he followed Lola and insisted on talking near a weather-control tower. Predictably, this tower would be the one with the damaged strut and the clumsy civil servant, putting Jimmy and Lola inches away from a lightning storm and tower collapse.

With moments to spare and no time for her secret identity, Lola vaulted from the car to right the tower and save her dejected love. Not only was young Olsen saved, but he was entrusted with the world’s greatest secret. Plus, he finally received an explanation of why the two could not marry.

Determined, Jimmy, Jr., left Earth for advanced schooling, throwing himself into studying the latest sciences and geographical finds. After graduation, he scoured the cosmos looking for specific chemicals with which to experiment.

Eventually, he returned to Earth and Lola to elope. The couple left only a note to the elder Kents so they could surprise them with Jimmy’s great invention. That was a serum derived from the Larimus parnæ herb which gave the imbiber superpowers on the order of a Kryptonian ! With it, he was no more vulnerable than Supermaid, nor was Lois after taking it.

With the obstacle to a happy marriage removed, the Kents gave their blessing and revealed their identities to the world. Wedding gifts poured in for the happy young couple until young Jimmy opened one lead box from…Luthor !

The note (which Superman only managed to read after the chest was opened, explained that the escaping gas would counter the effects of the serum and turn the serum poisonous, placing the Olsens and Lois Lane potentially at the mercy of Superman and Supermaid’s enemies.

Supermaid wears a short-sleeved and short-skirted blue dress, belted in yellow with a red buckle. Of course, there is a quite large rendition of Superman’s emblem across the chest. Additionally, she wears a red cape hanging down to her knees (with Superman’s insignia in yellow on the back) and red “elf shoes,” much like Robin’s.

Like her father, Lola wears disguising glasses and bulky, unflattering clothing in her secret identity of Lola Kent, so that nobody will guess that she is Supermaid.

Poor Supermaid doesn’t really have much of a personality, except as Lola Kent, when she’s a shy, excitable milquetoast like her father. It is actually possible that there is more to Lola than we see in the brief story, since she says little, but I suspect this is diagnostic and not an aberration.

“I’ve had a crush on Jimmy, Jr., for years, but he’s always avoided me, probably because of my pretense of shyness. I’m glad he now feels differently ! So long ! It’s time for ME to exit through the secret tunnel and go on patrol.”

“Stop it, stop it ! Don’t talk about Supermaid any more (sob). I want to know how you feel about me !”

“No time to protect my secret identity. I must act immediately to save Jimmy !”

Equipment:
INVULNERABLE CAPE [BODY 10, Skin Armor: 20, Sealed Systems: 08, Stretching: 03, Hardened Defenses].
Lola’s cape is, like that of her father’s costume, indestructable. It seems to easily contain an explosion of atomic fuels, leaking only gases which are apparently harmless. By mild extrapolation, it seems likely that the cape would also protect someone inside from dangerous gases, radiation, and attacks from without.

Probably just before the story, Lola had the Age (Young) Drawback. Up until late in the story, she also had the Secret Identity Drawback. 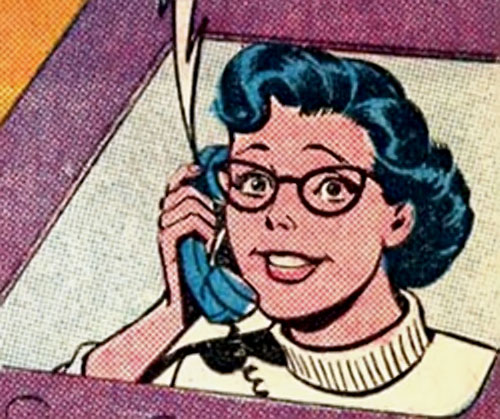 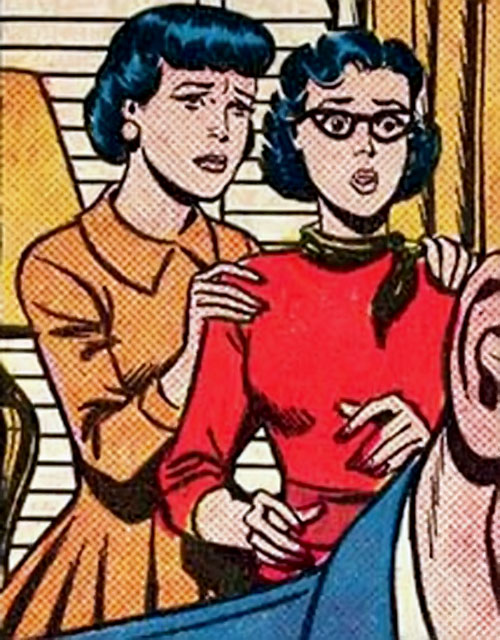 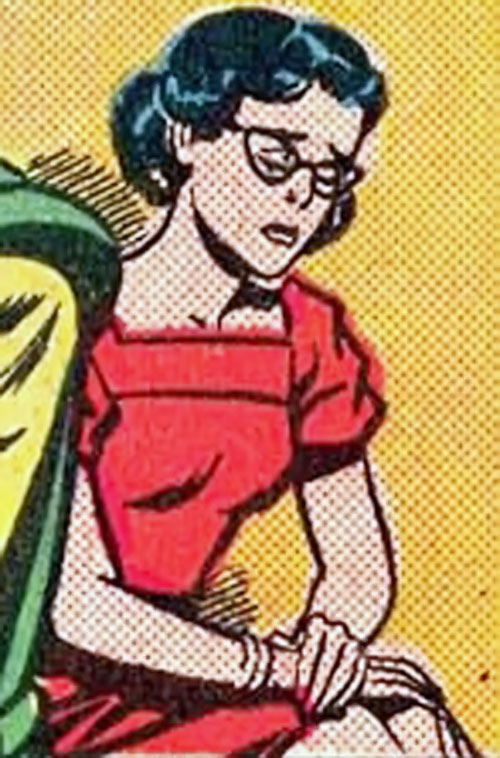 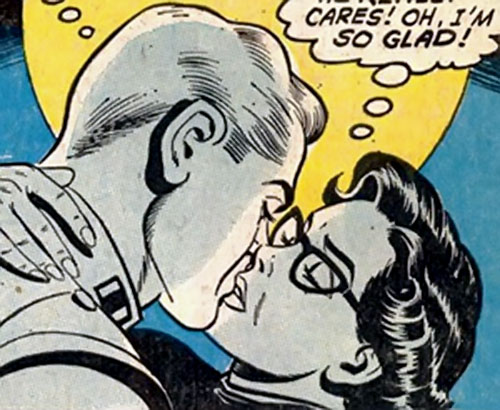 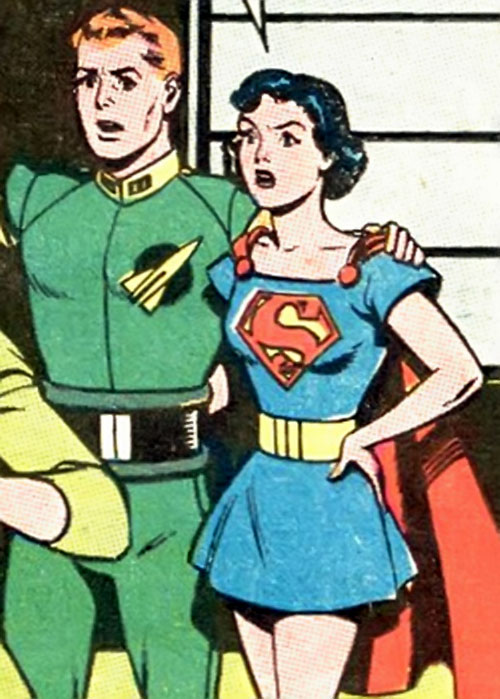 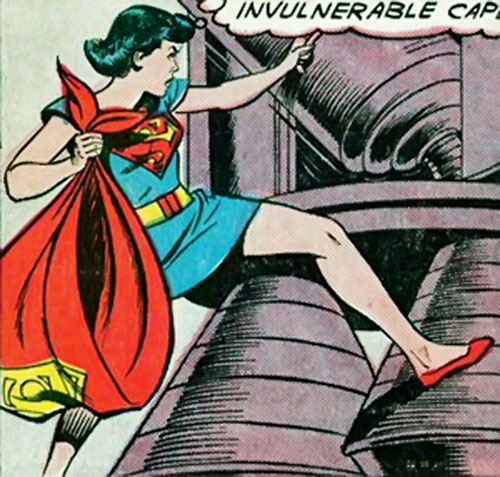