Writing up early Superman has been a popular exercise among our community, given the seminal nature of the character.

These are Sean’s notes, and you can also check Terry’s notes about Superman in 1938, and Doug’s profile of Superman during the first Chronicles reprints collection.

All together, I think they answer the question as to whether it’s a bird, or a plane.

Bullets bounce off his chest, but so do more unusual weapons, such as electrical rayguns and disintegration spheres. Generally, these attacks are deflected harmlessly away, but often the attacks bounce back to ironically destroy Superman’s foes.

No ordinary weapon has been known to harm him, though a rockslide once managed to knock him out, leading to a strange dream. Only the strange rayguns devised by mad scientists or hypnotic powers have any chance to affect Superman.

He is a master of gathering information. He has been known to spy on people by being right outside their window or by hovering over a door in another room. Playing it safer, he might simply use X-Ray Vision and extended hearing to watch from afar.

Another favored tactic is to alter his face (with his “face-molding” power) and join a suspicious group in disguise, making good use of his acting skill.

He has come up with several techniques for dealing with nosy Lois Lane who might learn of his secret identity. One method involves using nerve pinches at superspeed to knock her out. She won’t realize what happened.

Another method involves using superspeed to dash away faster than the eye can see. For example, he once took off his Clark Kent clothes, fulled the clothes with putty, and ran out of the room, all before Lois could see anything happening. He can also hypnotize her to fall asleep or even hypnotize her to make her forget seeing him change clothes.

His speed is incredible. He has often outraced bullets after they have been fired, and intercepted them before they hit their targets. Once at a circus, he showed up, running a mile in one second. He has also been known to outrace planes and even the disintegration spheres (“the shadow death”) created by a Arabian scientist.

His time at the circus also gave him the chance to show off his acrobatic skills, which were occasionally demonstrated at other times as well.

His accuracy with weapons is unexpected, since he hardly needs them. He once demonstrated skill with a bow and arrow by shooting out a particular light bulb in a sign some great distance away.

At another time, when confronted by a thug with a gun, he caught the first bullet the thug fired, and (using his skill with marbles) then proceeded to toss that bullet at the second bullet fired by the thug, knocking it away.

His skill with gadgets is rarely used. However, he has his own lab, where he created the krypto-raygun.

He makes good use of his charisma. He tends to reform would-be criminals before they become criminals. He tends to interrogate and intimidate underlings.

His combination of Mistrust and Popularity sets him at odds with the cops (since he continually breaks the law whenever he feels like it) while making him loved by the masses (though they’re still not yet completely convinced that he exists until he shows up). 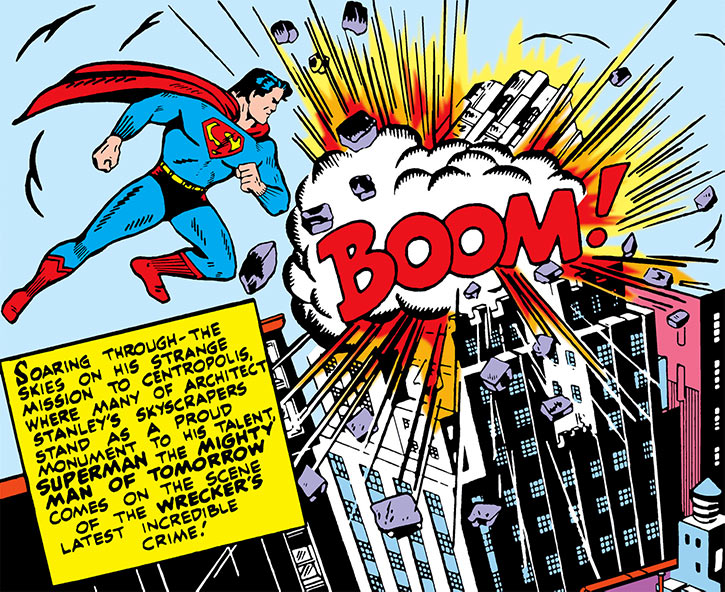 While his salary is not excessive, Superman makes do. After foiling the schemes of criminals involved with stock fraud, he ended up with an extra million dollars. A while later, he encountered a charity that needed *two* million dollars, so he worked extra hard to earn a second million to give them.

(Sean later writes):
I double checked a few archives volumes and found a few things that I missed before. Superman’s use of Hypnotism is greater than I thought. He has used it to make Lois fall asleep as well as to make Lois forget seeing Clark changing to Superman.

He also used Superventriloquism to trick thugs working for “The Light” (aka Luthor), as well as Superhearing to hear a radio broadcast. His super brain instantly comprehended the “strange language” of the mermaid Kuella. A guard from the Japanese-styled nation of Napkan could not lift Superman. Superman disguised his voice over the phone. He also used a superloud shout.

He also picked up an ocean liner— but maybe that’s reasonable with a 13 STR ?

(An ocean liner weights more than 13 APs — but I doubt the story’s writer was aware of that, so IMO no need for revision – Ed.)

Most of the classic elements of the Superman mythos have been developed by this point. While cub reporter Jimmy Olsen is still mostly absent having appeared only a couple of times, Superman works for the Daily Planet not the Daily Star. His boss is Perry White, not George Taylor.

Lois Lane is a nosy pest, which gets both her and Superman into plenty of trouble. Lois has begun to suspect that Clark might be Superman. Superman has encountered several of his archenemies, including Lex Luthor (who is now bald), the Puzzler, the Prankster, and the Ultra-Humanite.

Superman has a Fortress of Solitude, in which he keeps mementos of his bast cases against these foes. This is, for example, where he stores the powerstone that he takes from Luthor. And while people in the comics expect Superman to say some of his classic radio lines, such as “Up, up, and away!”, he never says these lines in the comics.

In addition to ordinary citizens clearly being familiar with the radio show, Clark once took Lois to a Superman cartoon! ”How they know so much about me is a puzzle! Perhaps they’re clairvoyant,” is Clark’s reaction.

This is clearly not the Earth-2 Superman.

Everyone knows what he looks like. By this time, his chest symbol has settled into a pentagon shape, instead of the wildly varying (sometimes even triangular) shape it has had on earlier occasions. His belt is consistently yellow now, and the chest symbol is consistently red and yellow.

Only the S-shield on his cape is inconsistent, being sometimes all yellow, and sometimes red and yellow. However, the blue and yellow S-shield of early appearances no longer occurs on his cape.

Superman’s belief in the sanctity of life had not completely developed by this point. Instead, Superman is devoted to saving innocent lives, but he will not usually lift a finger to save the life of a mad scientist or his henchman, though he made an exception for the thugs working for the Puzzler.

In contrast, however, he will go to great lengths to prevent young men from becoming criminals when they have been led astray, just as he will try to protect people from any form of injustice.

Clark Kent chose his job as a reporter for the Daily Star because it allows him to hear about problems as they happen. He often intervenes in both identities, alerting the public to crimes and social issues through news articles as Clark while taking direct action against those same ills as Superman.

The concerns Superman fought against ranged from mundanities such as illegal gambling rackets to foreign wars to protecting laborers from unsafe working conditions.

The means that Superman uses to address various problems are varied and comprehensive. An excellent illustration of this was the many ways he acted to solve Metropolis’s high traffic fatality rate. After breaking into a radio station and making a warning announcement, Superman proceeded to:

While Superman’s methods are effective and enjoy the general support of the populace, the authorities quickly came to see him as a threat to public order.

After Superman demolished several blocks of slums to force the government to provide better housing while simultaneously fighting the National Guard’s attempts to stop him, the Metropolis Police Department put warrants out for his arrest.

The Man of Tomorrow paid no heed to them, putting his mission to fight against evil and oppression ahead of official approval.

Superman is perfectly willing to simply thrash or physically terrorize wrong-doers into compliance. However, when confronted with people who may not realize the extent of the harm they are causing the Man of Tomorrow will take it upon himself to educate them.

The owner of a mine with poor safety procedures might find himself stuck in the very shafts he failed to maintain or a war profiteer could find himself dragooned into fighting the very war he had sponsored.

Superman’s judgment in taking these steps has been excellent, as the people he educates in this manner promptly swear to actively reverse the evils they have perpetrated.

“I’ve half a notion to end your worthless life right now !”

“People who play practical jokes should expect some in return.”

“If anything happened to Lois, I’d have to join the ranks of the unemployed.”

“This calls for— Superman !”

(As Superman blocks a firing squad’s bullets and then leaps away over a high wall, carrying Lois Lane to safety)
Soldier: “You can’t do this ! It’s impossible !”
Superman: “Thanks for letting me know !”

(Making an announcement over the radio) “Attention, citizens of the city ! A warning from Superman — Pay close heed ! The auto accident death rate of this community is one that should shame us all! It’s constantly rising and due entirely to reckless driving and inefficiency ! More people have been killed needlessly by autos than died during the World War ! From this moment, I declare war on reckless drivers — Henceforth, homicidal drivers answer to ME !”

This character is far too fascinating to possibly exist in the DC Universe.

Equipment:
Krypto-Raygun [BODY 02, Recall: 10, Flash: 01]. The Krypto-Raygun can take photographs. It can then flash these pictures on a wall.

By Sean MacDonald with additional material by Roy Cowan. 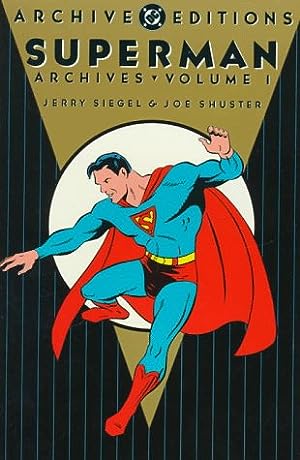 All the Superman Archives volumes 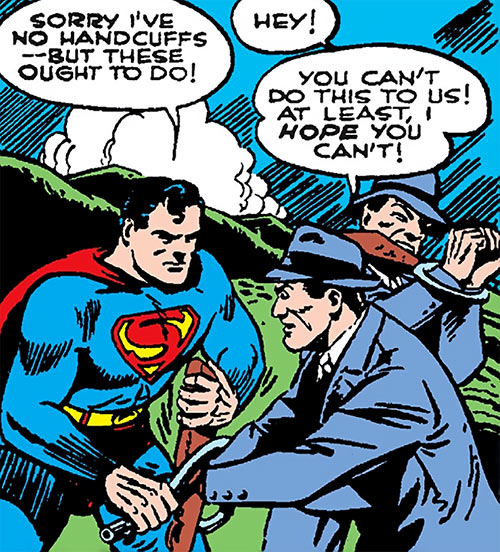 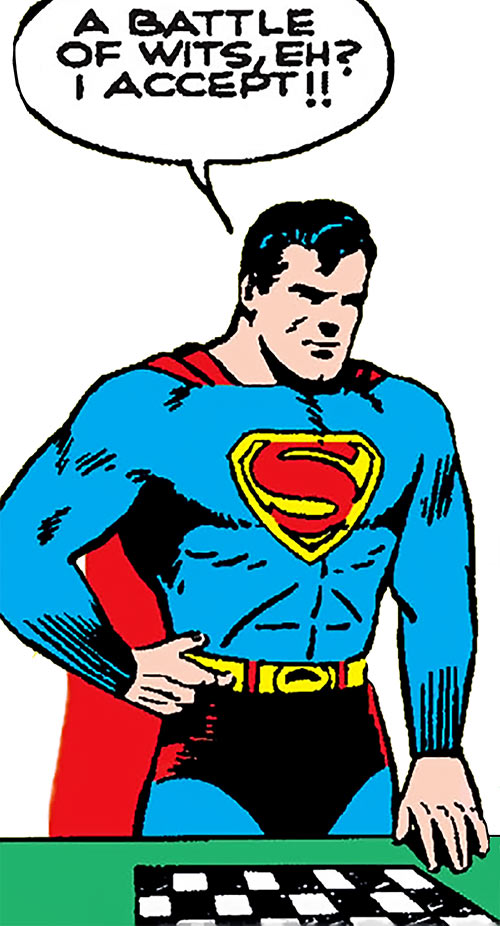 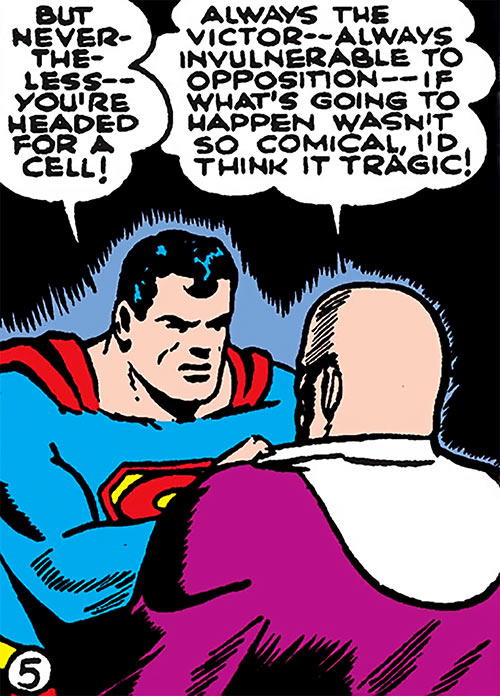 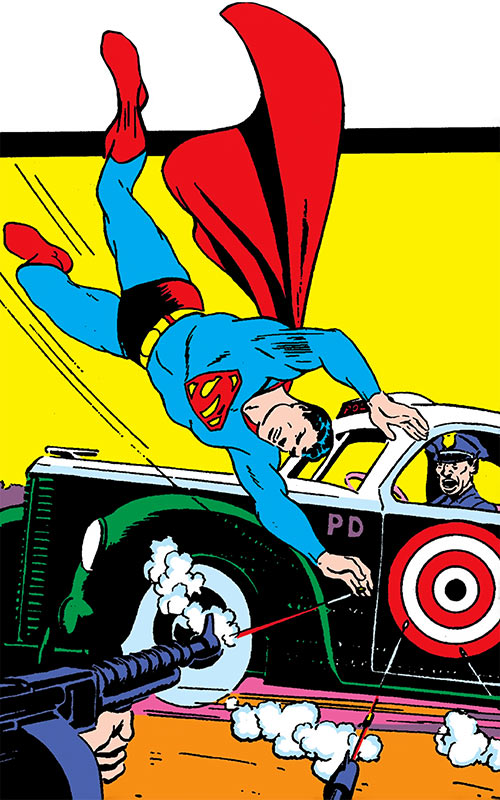 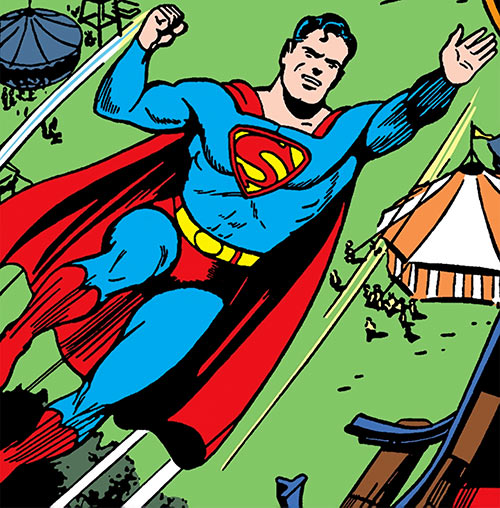 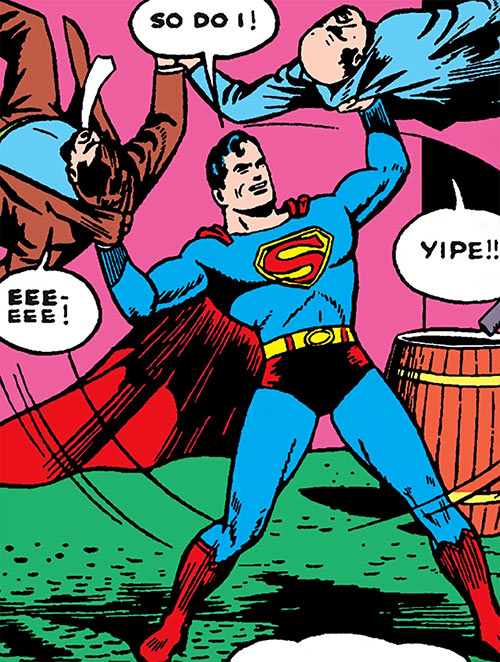 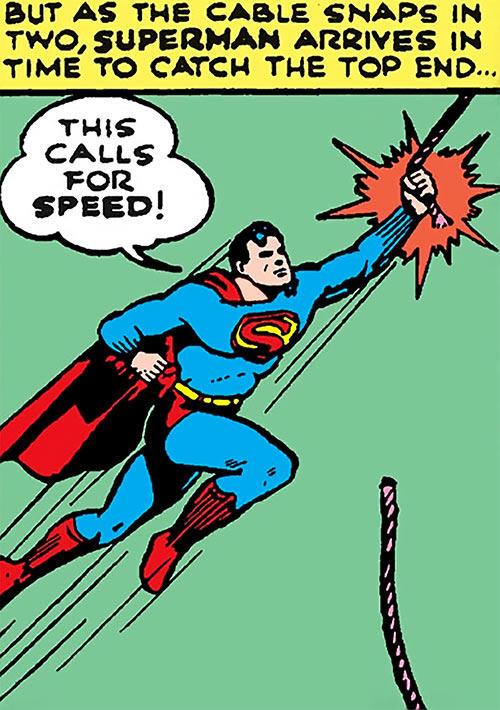 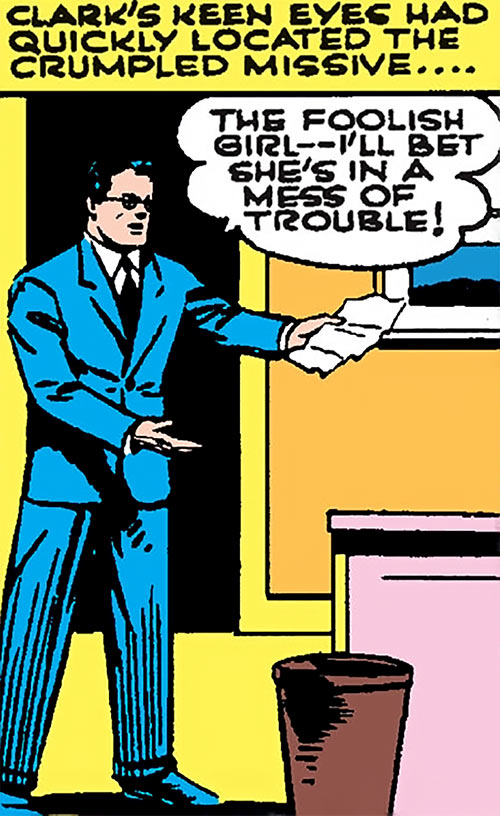