It could easily smash through brick and concrete walls, withstand small-arms fire, and was air-dropped several stories, punching through two floors of a prison building, without the wearer suffering any injury.

The suit had a suite of sensors, though most of the specific functions are unknown beyond an energy detector (Detect). It is known that Superman found the sensors a poor substitute for his normal supersenses, so any additional sensor systems would probably have lower APs than those of Superman’s sensory powers.

The armor appeared to be environmentally sealed, though this is unconfirmed (Sealed Systems).

Unfortunately, the heavy suit was rather clumsy and quite noisy. It made loud thumping noises whenever the wearer was walking (Density Increase, Miscellaneous Drawbacks). The emergency escape explosive bolts were also easily triggered (no Hardened Defenses).

When Superman was temporarily rendered human by Mxyzptlk’s magic, Professor Emil Hamilton gave him this suit of armor to wear. Superman wore the suit when he went to Stryker’s Island Prison to stop Killgrave’s escape attempt. 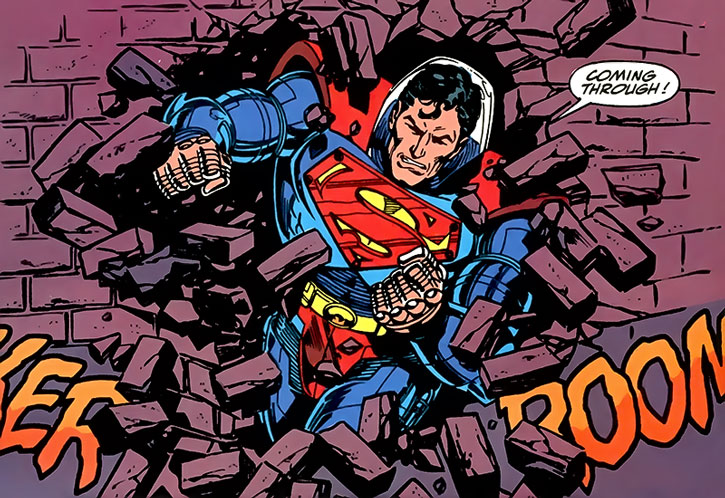 (Emil Hamilton seems to be a reference to Edmond Hamilton, who wrote a number of DC comic books. Hamilton is chiefly notable for his Captain Future series of pulpish  sci-fi novels, which were particularly influential in Japan.)

The suit allowed him to wade through Killgrave’s armed minions and confront the supervillain himself. But a single blast from a large blaster created by Killgrave was sufficient to trigger the suit’s emergency explosive release bolts.

Superman was unhurt but was subsequently unable to stop Killgrave from escaping.

This segmented-plate armor was painted in a scheme similar to that of Superman’s suit. It is predominantly blue with red “boots” and “trunks,” yellow “belt,” the hands painted in flesh tones similar to Superman’s.

The chest plate bears the traditional Superman symbol of a red stylized “S” on a yellow downward-pointed pentagon with red borders. 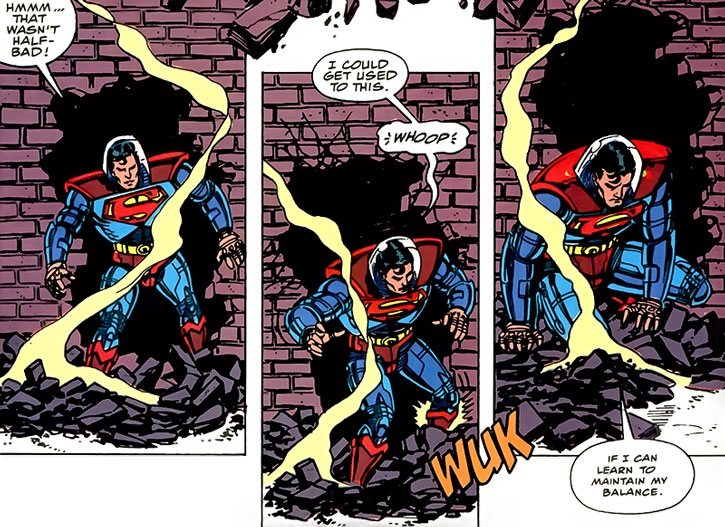 The armor had thick red shoulder pads merging into a single large armor plate over the back instead of a cape, with a all-yellow Superman symbol pentagon in the center.

The suit’s helmet was a transparent rounded cylinder fitting closely around the wearer’s head. The dark blue ribbed plastic foundation of the armor showed through gaps in the plates at various joints such as the midriff, hips, knees, ankles and wrists, which was necessary to facilitate movement.

Advantages:
Miscellaneous (RAPs of Physical Damage are applied to the armor, not the wearer)

Drawbacks:
Miscellaneous (No more than 03 APs of DEX and DEX-related Skills can be used while wearing the the armor (calculated after subtracting DI from the wearer’s DEX); the armor is very noisy when walking, so attempts by others to auditorily detect the armor while moving (Powers like Directional Hearing or Perception Checks such as detecting Thief (Stealth) attempts) get a bonus -3CS to OV/RV)

Breaking the Man of Steel

If the armor takes any RAPs of damage, the suit’s explosive bolts are automatically triggered. These shaped charges cause the armor to completely break away from the wearer, leaving him exposed but unharmed.

In game terms, this is simply a cosmetic effect of the armor lacking Hardened Defenses and thus falling under the standard Gadget Damage rules, which means that even a single RAP is enough to knock a hole in the armor “large enough to walk or climb through(.)” 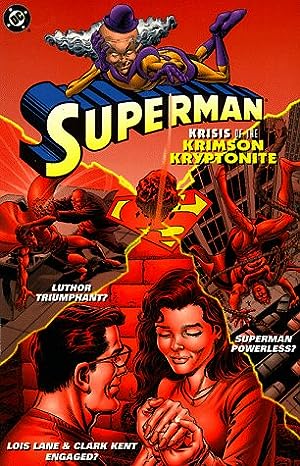 Superman: Krisis of the Krimson Kryptonite 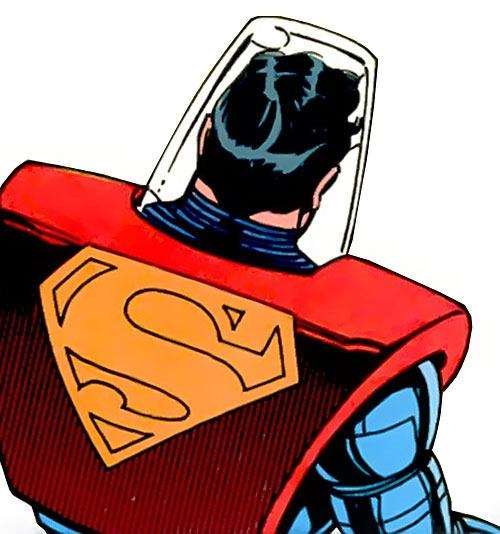