“Did you ever consider if one day Superman and Batman had sons ?”

The “Super-Sons” are a DC Comics “imaginary story”. That is, it doesn’t take place in the same reality as the bulk of the DC Universe stories.

These are pretty non-logical stories using the then-popular “youths in revolt” and societal upheavals themes to tell weird super-hero fare.

And of course, there’s a roadtrip of self-discovery. There always is.

Apparently, the “Super-Sons” returned to continuity on Earth-16 during the few years when the DC Universe had 52 Earths. And in 2017 the “Super-Sons” name was reused, but with entirely different characters (Jonathan Kent and Damian Wayne).

If you do not happen to be familiar with the crises and multiverse at DC Comics, you should read our primer on the ages of DC Comics before this entry.

Clark, Jr. is untrained in the use of his powers and possesses no noteworthy skills.

Clark is somewhat susceptible against explosive attacks. These regularly leave him stunned for times ranging from a few minutes to perhaps two hours. 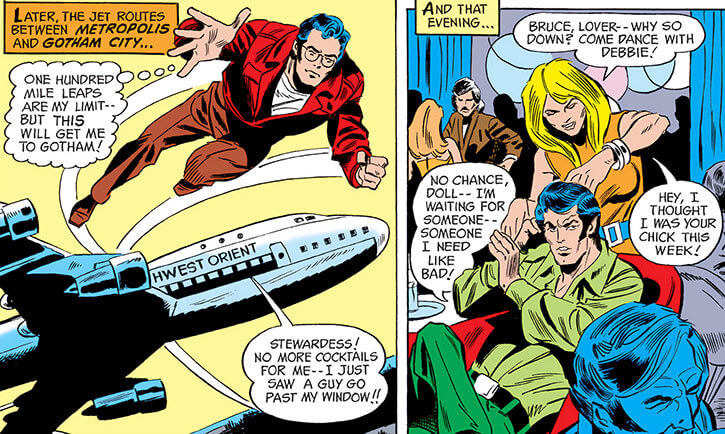 His half-Kryptonian heritage gives him access to most, maybe all of Superman’s powers.

While it’s possible to knock him out, it seems very difficult to kill him outright (Invulnerability) or even make him bleed (Blunting).

Since he is powered by yellow sun radiation, it seems likely that he doesn’t require any other form of nutrition beyond that.

Due to his Kryptonian heritage, and being a half-human, half-Kryptonian hybrid, he immediately loses his abilities under the light of a red sun.

He also loses his powers while residing on magically-charged lands. This limitation likely extends to magic-based attacks made against him.

We never see the effect of Kryptonite on him. But one may assume that he would at least lose all his Powers and superhuman Physical Attributes, even if it may not be lethal to him. 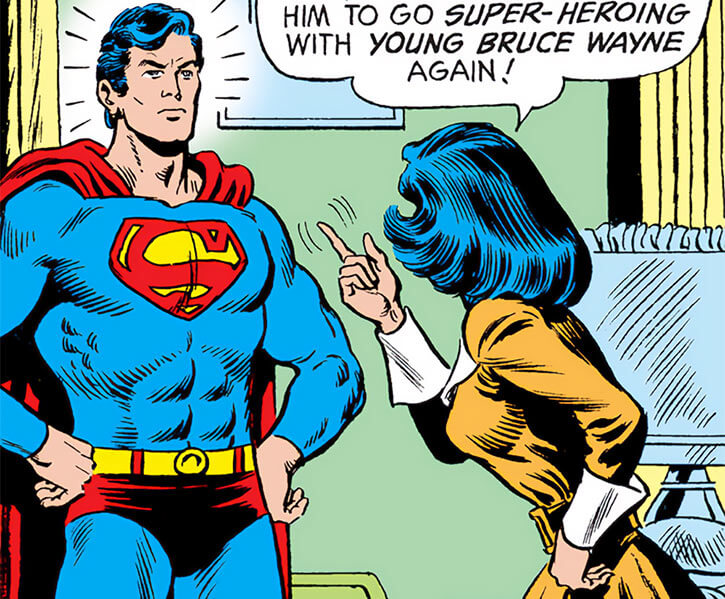 Clark Kent Jr. is the son of Superman and an unrevealed mother. One assumes that it’s Lois Lane (likely not Lana Lang since she has black hair).

He has apparently always been aware that he was half-Kryptonian. But this too is contradicted in early stories which suggest that he only recently learned of his true heritage.

Clark did not take well to living in the shadow of the world’s greatest hero. He sought independence through his own heroism, along with his best friend – the Batman’s equally young son, Bruce Wayne Jr..

It is known that Superman was away most of the time through his upbringing. His moral education and fatherly advice was missing or lacking.

Leaving for a road trip through America, the young dynamic duo, riding on one motorcycle, had their share of weird adventures. It taught them valuable lessons, humility, humanity and eventually responsibility.

They stopped a crime lord in a temporal copy of Sparta, created by his father as a safe test. But it turned out to be more dangerous than the real city.

They stopped an insane plot in the village of Barston. A few men where putting the entire population into suspended animation until a crashed space ship — whose crew had been killed by an insane village mob — could repair itself automatically and bestow them all with great riches. But the ship repaired itself ahead of time and flew away.

The duo stopped the ruthless overseers of a worker camp on Massacre Island.

They participated in experiments, on Desolation Island, a lost warm land in the Antarctic, to determine whether mankind was innately good or bad, while immaturely betting on the outcome.

They joined their fathers at Camp Enoyreve to work things out. But military weapon Bio-X7 nearly released poison gas in the area, which the four men prevented.

As Bruce Wayne Sr. had been believed killed by an Inuit assassin (not those ones), Clark joined the hunt.

Meanwhile Bruce Wayne Jr. competed against Dick Grayson aka Robin to catch the killer and claim the mantle of the Bat.

The duo joined professor Hanson and his son Lance on an expedition to Mayan-75, a lost Mayan city. Paul Somerset and his daughter used it as a secret base, and Somerset sought revenge for Hanson’s past betrayal. After evading death traps the duo saved the day and helped the two older men reconcile. They also facilitated a friendship between Lance and Ms. Somerset.

Tired of the grandstanding of their super-hero fathers, the duo had them convicted and temporarily imprisoned. But they then had to take over the roles, under the mentorship of Green Arrow (Oliver Queen), the Flash (Barry Allen) and Aquaman (Arthur Curry).

The duo then found themselves in an all-women city under the control of an insane alien.

Then, the daughter of Lex Luthor tricked them into helping Lex save the inhabitants of planet Lexor. But Lex had created the problem himself, to get help in escaping prison!

Next, the duo arrived in a magical city somewhere in the west. There, time had frozen and four assassins had killed off the entire population. But now they had to face justice through Batman Jr. and a powerless Superman Jr.. 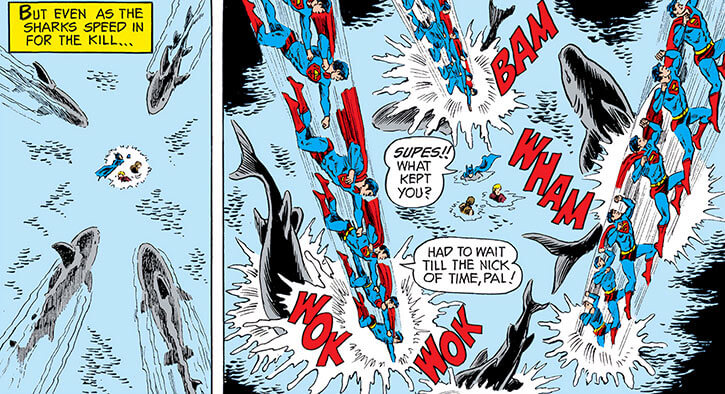 All of these things supposedly occurred on Earth-154 in the Pre-Crisis multiverse.

But then came the revelation that the adventures of the Super-Sons had only been simulations in Superman’s supercomputer at the Fortress of Solitude (supposedly on Earth-1). Which arguably contradicts a few original points from the previous stories.

The Super-Sons were made flesh in normal reality, but sacrificed their lives as it became clear that their unnatural presence would soon destroy the Earth.

I’m conjecturing that the adventures did occur on Earth-154 as originally told, but that the same stories were also retold verbatim within the Earth-1 supercomputer, in a weird multiverse parallel.

This also meshes with the final story, where Superman Sr. is falsely believed dead and Superman Jr. finally grows up and takes responsibility.

It was later shown that the Super-Sons lived on Earth-16, one of the 52 Earths, in the Post-Infinite Crisis continuity.

Supposedly, their adventures had again taken place there as described originally.

And realizing how crazy all of these stories sound, it must be said in their defence that they are rather campy, funny, drawn with nice art, actual classics and worth a read! 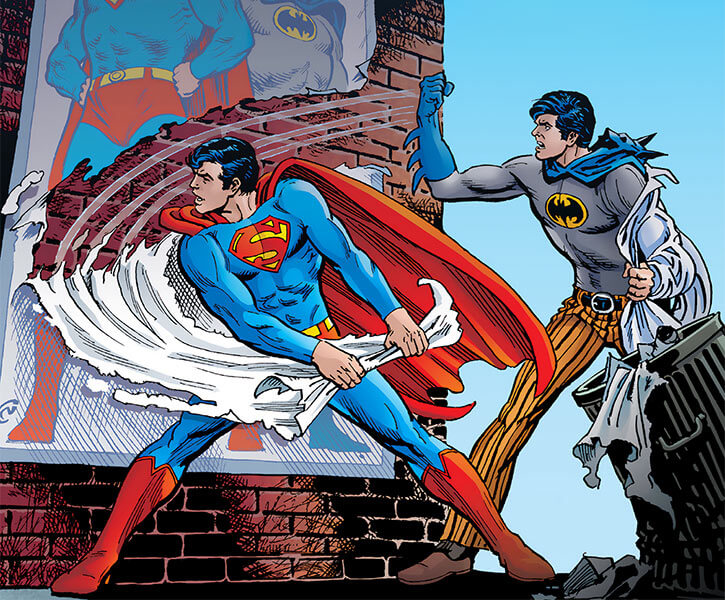 Clark Kent Jr. looks exactly like a younger version of his father Clark Kent Sr. aka Superman. He even wears the same glasses.

His civilian clothes are relaxed and almost hippie-like.

His hero costume, however, is exactly like Superman’s. The only give-away is that he is noticeably younger than his father. The costume may also be made of Kryptonian materials as it seems indestructible.

He never denies not being Superman Sr. of course, but always presents himself as his son.

Junior often has a smile on his face. Even when people are dying around him (??).

Young Clark was raised a humanist and idealist by his father. But he has a strained relationship of teenage angst with him, the greatest superhero on Earth.

Actually, Superman has been so busy all the time that it seems he hasn’t had the time to connect with and raise his son properly at all. Their relationship is a fractured one.

Getting out from the shadow of his father, Superman, is a tough task indeed. He copes with this by doing his own superhero thing, using his father’s costume even (!), while calling himself either Superman Jr. or Superman II.

He is best friends with Bruce Wayne Jr., who his soul mate and best brother. They also, eh, fly together in the strangest of stances.

They both have a lot to prove both to themselves and to the world at large.

The pair’s priorities tend to change from experience and fickle impulse. One week it’s ok to be a great and famous hero. On the next week grandstanding is unacceptable and everything must be done under great humility and from hiding.

Naturally, Clark talks a lot in hip slang and is almost something of a semi-hippie himself.

Dangerously, he is a rookie and not very good at prioritizing emergency activities. This is why he will often heed to Bruce Wayne Jr.’s suggestions (who’s also a rookie). Instead of saving people in need he has sometimes saved equipment – with dire consequences.

Both being inexperienced, unfocused and impulsive, they do not always check the scene before rushing in to do some heroics. And if that has bad consequences, they’ll make sure not to learn anything from the incident.

Clark is more of a book-reading nerd than Bruce.

His heart is in the right place most of the times. He worked voluntarily at a community centre of some sort, which for some reason his father didn’t agree with, before taking to the road.

He does not have the experience, the resolve or the confidence to be a great superhero. But he will learn, in time.

While his intentions may be good he doesn’t know what he is doing most of the time and still has a lot of growing up to do!

Eventually, it will all turn out well, hopefully, as he is to become the next Superman, the greatest hero on the planet! 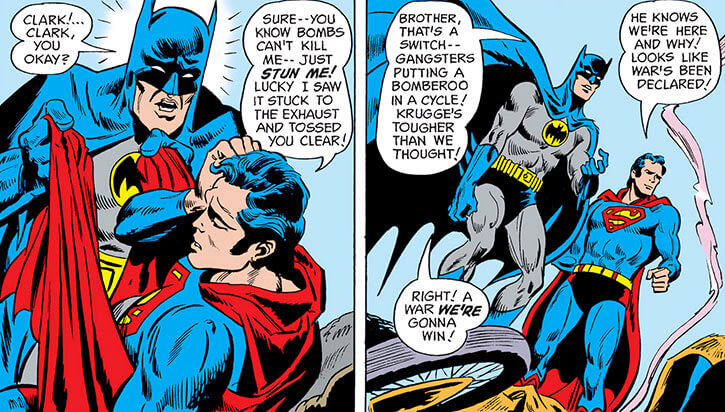 (To Superman) “Trouble with you is, you should never have had a son who is half-normal human instead of all-perfect alien like you !”

“Sorry, folks, my destiny calls, cornball as that may sound !”

“Loser buys the winner Cokes and hamburgers for a month ! Deal ?”

“See ? Your punch shows that despite being basically good, sometimes your adolescent temper gets the better of you ! And since I’m also basically good, I won’t hit you back ! It would merely half kill you !”

“You mean, hanging out, cruising chicks, and all that ? None of that’s a kick after doing the super-hero thing !”

“Real heavy women’s lib stuff ! But, baby, without men how will you have lovers… husbands… families ?”

“It’s just an ego trip ! They’ve no humility ! And the adult world laps it up rather than think of society’s real problems… of which you grownups are guilty !” 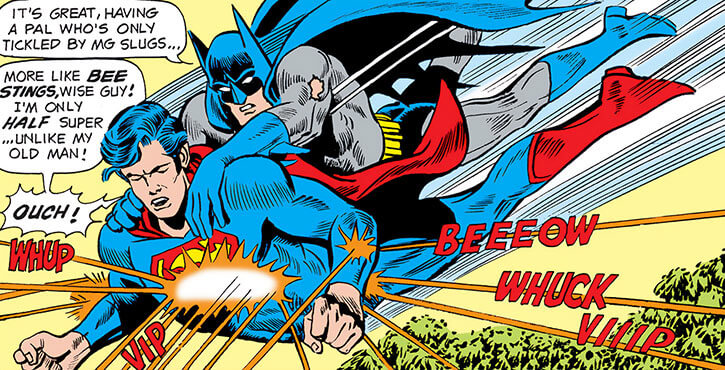 Clark lives on Pre-Crisis Earth-154, which history is largely undocumented. However, in addition to Superman and Batman there are also Aquaman, the Flash and Green Arrow, as well as Lex Luthor, the villain.

Kryptonian Superman Costume [BODY 20, Skin Armor: 02, Note: This is a speculative item, based in Pre-Crisis mythology, as the costume appeared indestructible regardless of attacks made against him. With or without the costume his RV against explosive attacks, taking his Vulnerability into account, is supposed to be 05]. 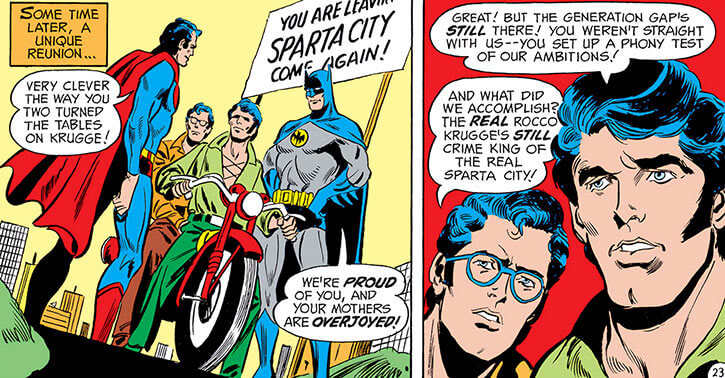 The lad will grow up into a Superman !

Clark slowly grew in power over the series, starting from a rather low level.

At the beginning, Clark’s Sealed Systems was rated at 11 APs, his STR was 09 only and he had the Jumping power at 17 APs instead of the Flight power, which started at 09 APs at first, to slowly rise to current levels.

At the end his BODY score may have been higher, but this was never proven. In the end, he would supposedly, had the story continued, reached half his father’s, Superman’s, Pre-Crisis, planet-shattering levels.

The following are not demonstrated:

For unrevealed reasons he would be very susceptible towards explosive attacks, although it was revealed that only a nuclear detonation would destroy him. Explosives will render him unconscious for a while, usually for minutes up to two hours, depending on the detonation strength.

A GM really wanting to exploit his weakness toward explosions may give him an additional Misc. Drawback (the Duration of all Stuns through explosive attacks are doubled)

Despite these stunning attacks he would not otherwise be bleeding or even hurt in any way, and recover as usual (hence Blunting).