This is a very… specific version of Superman. And it existed in a rendition of the Kamandi far future that was also rather specific.

Those specific things occurred in 1993 (as is visible from the art style), in two minor DC Comics miniseries.

Superman is still a physical and intellectual powerhouse, with a personality to match. However, he’s less powerful than before due to age and accumulated fatigue and pollution.

His powers and abilities are pretty much the same as before, although diminished. He’s also much more dependent on solar energy than ever before, almost to the level of dependence Namor has to the seawater.

Also, for some reason, his senses seem to have evolved. He no longer has vision powers, but his hunter-like senses are astounding.

(It is unclear whether either Kamandi series (the original, or the “Earth’s end” version) are in continuity. Although I suppose this does not matters much due to Hypertime , and subsequent reboots. Although the Superman depicted below was only seen in Earth’s End, it’s not absurd that the mythic Superman whom Kirby’s Kamandi was trying to reach was similar to this version.)

In his 150 years on Earth, the Man of Steel has seen civilization twice destroyed. Following the second apocalypse, under the shadow of polluted skies, his powers ebbed. He forgot even his own name, becoming a myth for many of the animal tribes that had evolved after the apocalypse.

The original Kamandi quested for him for years after hearing tales of the Great One from a gorilla tribe who possessed Superman’s costume. He, as far as we know, never found him.

In a variant reality known as Earth’s end, however, a Hypertime version of Kamandi allied with androids. Called Biomech VII’s, this race of biological machines had been programmed to find the cause of the second apocalypse. Among them was an Hypertime version of Ben Boxer. 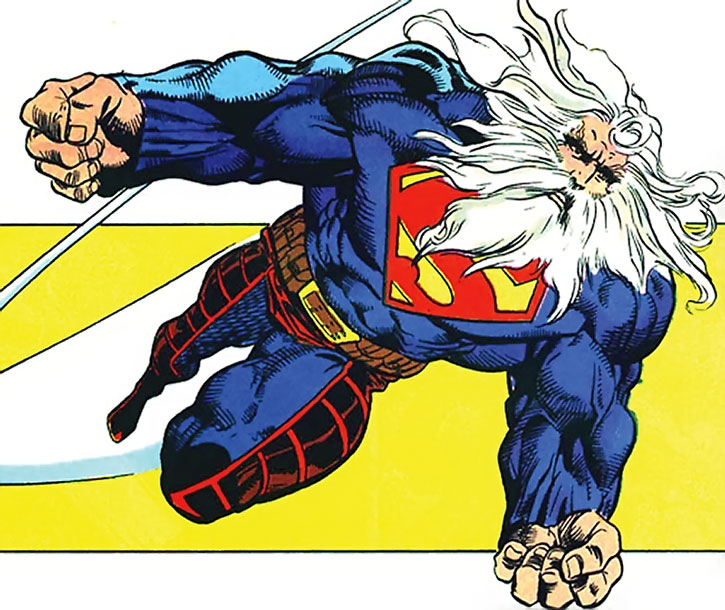 The biomechs found and rescued the amnesiac Man of Steel. The VII’s brought Superman to their orbiting city above the clouds. There, in the bright sunlight, his mind and powers returned.

Superman helped the biomechs to defeat the Machine Mother, the system’s computer that had killed most of the people in the world.

The Biomechs then asked Superman to join them in their efforts to cleanse the Earth of subhuman scum. Of course, this sparked conflict as Superman wouldn’t abet such carnage.

Sadly, Superman died at the end of Superman at Earth’s End, lethally wounded by two Adolf Hitler clones. While he could have been healed on Boxer’s airship, Superman decided that it was time to move on. He went into a great fire to disintegrate his corporal existence, together with the corpse of Bruce Wayne.

Superman now has a large white beard and long white beard, a bit like Santa Klaus. He goes bare-foot, making him look even more-hermit like. He still wears a slightly darker version of his costume.

Superman is still a colossus, his broad muscular frame contrasting with his elderly appearance.

Superman, although diminished and old, is still a highly impressive hero. However, while he’s still a boy scout and idealist, age has frozen these beliefs, making them more conservative.

He’s also more fatalistic and pragmatic. He went as far as using the gun of one of Wayne’s greatest enemies (the Expunger) when it was obvious his powers wouldn’t be enough for the situation at hand. And he gave up on the never-ending fight at the end.

When he was exposed to sunlight by the Biomechs, he regained vivid memories of his formidable and amazing life. This made him look back at the old days in nostalgia.

“I’m not gonna let you blow up Gotham City !”

Bonuses and Limitations:
Minor Power Burnout on all powers except Solar Sustenance (see below).

This version of Superman is much more dependent on solar energy than the mainstream Superman. This may have been caused by the pollution and radiation on Kamandi’s world, or by the first apocalypse. This is handled as follows :

By Peter S Piispanen aka The Angel and Sébastien Andrivet. 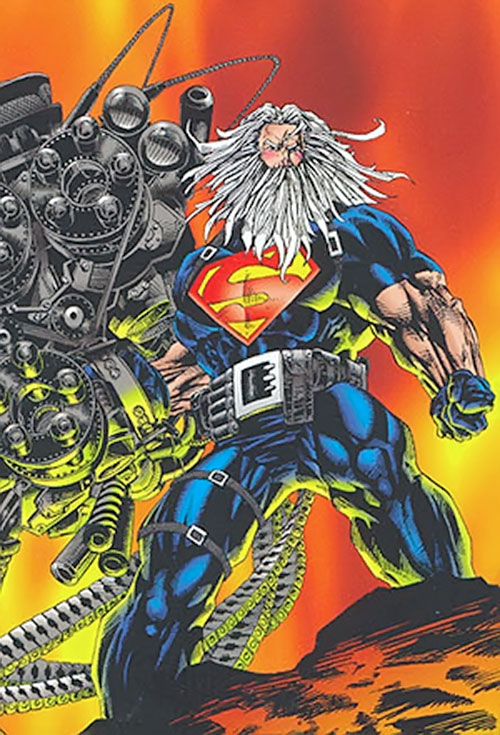