The Superman Robots have almost all the amazing powers of the original. They lack protection against toxins and pollutants and cannot absorb solar radiation, but they can mimic the rest of Superman’s abilities. They have superstrength, several vision powers, a perfect photographic memory, superbreath, superspeed and can fly.

The robots, themselves, are most fantastic creations. Their only limitation their susceptibility against pollutants. They are also programmed with the personality of Superman to such a degree that they can pass themselves as either Superman or Clark Kent without anyone noticing anything strange.

Superman created these robots when he discovered that even he couldn’t be always be in two or more places at once (while he was still Superboy). He thus created robotic duplicates of himself that could be used as stand-ins for either Superman or Clark Kent.

The first models were relatively crude. But Clark’s skill in creating them steadily progressed. Usually Superman had up to six robots on hand at any given time, and which were stored in the Kent’s basement in Smallville.

Sometimes the robots were used for passing as Clark Kent, but considering the risks, that was not a common practice. After Superman moved to Metropolis he managed to design Superman robots of superior quality. He did so using knowledge of robotics which he gained from studying the robots of criminal geniuses such as Lex Luthor.

In his apartment, Superman used to keep one or two robots (in a hidden closet). Many more were kept at the Fortress of solitude.

Superman’s skill in robotics and artificial intelligence developed to the point that he could design lookalikes capable of withstanding all but the closest scrutiny. One example was a Clark Kent robot could take Lois for dinner without her sensing anything to be wrong.

Over the years the robots (that have individual numbers) have been part of many adventures. Some robots that have been working long in the field have developed a greater sense of self-consciousness and became self-aware of their existence.

For example, when Superman once ordered his Superboy Robot Legion to fly into the sun. Because they were early robots, Superboy versions and could malfunction due to the increasing pollutants. But one of the robots, named Superboy Robot-6, realized that Superman had ordered it to to commit suicide.

Superboy Robot-6 was programmed to defend itself and thus avoided the order. He also deduced that the real Superman had to be evil, since he had given such an order to them. SR-6 kept hidden for many years in Smallville performing many good deeds there as it had been programmed.

Later when it met Superman again it had reprogrammed itself and enhanced its’ functions. It decided that Superman was evil and had to die. But Superman managed to bluff the robot into believing that it had killed a human. This led the robot to believe that it had to commit suicide and it fulfilled the old order to fly into the sun.

Another robot, of Superman, was lost in action (or so Superman thought). In fact, it had been destroyed, but had been repaired again by the military and continued to operate with them. When the Kryptonian organism called the Kryptonoid arrived at Earth it began looking for the son of its’ former foe, Jor-El. It found Superman, but fought him to a standstill.

Later the Kryptonoid, who was protoplasmic, wanted to get a physical body. He found the Superman Robot (who he mistook for the real Superman) and absorbed him. The result was a Kryptonoid Hybrid. The Hybrid was later defeated (a story for another time) with the robot still a part of it.

The robots have been part in many more adventures and continue to function as stand-ins for Superman occasionally to this day.

The Superman robots look exactly like the original steel deal ; big, muscular, powerful and impressive. They are dressed like Superman or Clark Kent and might even be programmed to function as another person’s stand-in.

The robots behave exactly like the original Superman, but very probably they lack the original’s imagination, charm and experience. They are programmed to obey every order of Superman, defend all sentient life and defend themselves. They are performing good deeds just like the original ones and should be considered heroic robots (although most lack self-awareness).

The Superman Robots are part of the pre-Crisis DC Universe. Of course, robots are still fun and having the Players fooled by a Superman robot (that they believe is the real one) is even more fun !

If the current Superman somehow lost his powers, it’s quite probable that he would attempt to create something like the Superman Robots to continue the Neverending Battle. It could also be interesting to see how a damaged Superman robot would work with the player’s group of heroes… and slowly evolving a personality too (perhaps with a new costumed identity as well !).

Notes:
Some Robots slowly evolve a self-consciousness and thus receive mystical stats at 2 APs, while others have even had some Subskills of their own that they have learnt while working ’in field‘, Note also the lack of ’Hardened Defenses’.

Connections:
Superman (Low), Could probably use most of Superman’s connections also if it manages to pass as the original for the various contacts.

Drawbacks:
CIA (Obeying Superman), CIA (Protecting all sentient life), Secret Identity (Both being a robot and passing as Clark Kent), Fatal and Loss Vulnerability (Pollutants, malfunctioning of powers (increased R#) and in the end complete shutdown). 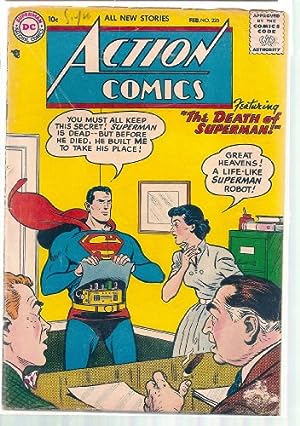