Vitals are eyeballed from the art, as usual on writeups.org when there are no official values (or when these don’t match the art).

The data is also for the Lois Lane of this specific era, not all takes on her across decades.

Life in the short Lane

Said eyeballing led to a discussion with writeups.org commentators Darci and Brent about Golden age Lois Lane’s likely stature. Here’s an excerpt if somebody’s interested, which started as a tangent about Clark Kent being usually listed as being 6’2″ (1.88m), and about US women born in the 1920s being on average 5’4″-ish :

A bloke of Kent’s generation would be on average about 1.73m tall, abstracting social class/income out. Kent (or Supes) isn’t usually drawn as having a half-a-head height advantage over most people. One gets the impression that he’s perhaps one or two inches taller than most, but not more. It’s frequent for everyone to be drawn the same height back then, and all fit men have the same powerful body type.
During this era of Action, Lois is usually half-a-head or 2/3-of-a-head shorter than Clark. So *if* we assume a 1.75/76m tall Clark because there’s no reason to have him taller, my rough guess for Lois being 1.62m works out. In fact it might be a bit highballed, due to heels.
I suspect that the more-than-6-feet values for Supes are derived from George Reeves, who *was* markedly taller than most men of his generation. Doug’s profile has him at 1.85m or so. Before the cinematography choice of having a tall Superman, the vibe was more that Clark is an everyman.
FWIW I did a quick check an Noel Neill was, coincidentally, 1.62m. 🙂

(Rest of discussion involved a quick check about common heel heights in women’s shoes back then, and vitals for a few other relevant actresses of the day.)

Superwoman has Superman’s powers, though she’s not as powerful or experienced. Here what she had the time to demonstrate :

See our Superman as of 1942 character notes for more about Supes’ ability at this point. How many of these additional powers Superwoman would have been able to demonstrate is unknown.

Lois went unmasked. Curiously, she didn’t expect people to recognise her. And indeed, Clark Kent is the only person who did during the story.

In 1943, reporter Lois Lane was accidentally hit by a truck. Though her condition was critical, Superman located a missing surgeon with the technique to save her. Thus, she recovered without any sequelae.

While she was comatose, Ms. Lane dreamed that she received a blood transfusion from Superman. In her fantasy, it had been deemed the only way to save her life. However, it soon became apparent that it also granted her Superman-like powers. After discovering her powers, Lois kept them a secret.

She promptly made herself an “action-costume” patterned after Superman’s, and began a career as a super-heroine.

Superwoman rescued a man who seemed in deadly danger. But as it turned out, he was merely fleeing his irate wife, who was fed up with him being late. Though mildly embarrassed by this turn of events, Superwoman successfully encouraged them to make up. Then she flew up, up and away.

The next case was more along the lines of what she was looking for. She took down a bunch of gangsters who were attempting a kidnapping. The victim turned out to be Clark Kent – and he recognised Superwoman as Lois. Ms. Lane told him what had happened. But she soon realised that this miserable weasel Kent was going to betray her confidence.

Therefore, she intimidated him by carrying him as she flew wildly and zig-zagged across the Metropolis skyline. She left the shaken Kent at his apartment.

Superwoman was then attacked by the sinister Dr. Skowl – reputedly an old enemy of Superman, though that was his first and only appearance. He captured her using surprise, a blimp, a steel net and a special knockout gas. And when Superman came to the rescue, he captured *him* using a massive electrical trap.

Dr. Skowl was about to execute Superman using his death ray when Superwoman revived. Though the Man of Steel was incredulous, she saved his life then turned the ray against Skowl just in time. As Superman was still woozy, she destroyed his restraints and helped him out.

Flush with confidence, Lois then cornered the evasive Superman and proposed. As had been her dream for five years, Superman accepted. However, they then both heard newsboys in the distance. That no-good Clark Kent had betrayed Lois Lane’s confidence and exposed her secret identity ! Oh no ! The cad !

Lois’ dream stopped there, as she was brought out of her coma after a successful brain surgery.

But these all involved tricks, dreams, temporary powers, etc.. Many of these stories were in fact more retrograde than the fairly-progressive-for-the-times 1943 tale.

It’s a pretty neat 1940s costume, innit ? And yes, the S-shield is altered to look like a stylised heart. You can’t make this up.

The little decorative skirt is presumably there for modesty. That’s how it was done for contemporary ladies’ swimsuits, to avoid putting emphasis on the buttocks and crotch. And with the belt, the skirt also emphasises Lois’ wasp waist. Underneath are red-briefs-worn-over-blue-tights, exactly like Superman’s.

In the story Superwoman acquires a confident, powerful body language as she learns to use her powers. Many of her action poses are also Superman’s.

As soon as she acquires powers, Lois unhesitatingly jumps at the occasion to a/ have exciting adventures and b/ help those in need and fight crime. She seems to have been waiting for this all her life, and in most ways it is a continuation of her work as a fearless investigative reporter.

The story places an emphasis on 1940s femininity but once – as Lois is startled by a mouse, though that helps her protect her secret identity. After that she’s bold and confident, but also aware that she needs to acquire experience with her new powers and role.

Once Superwoman rescues Superman and he accepts her proposal, one gets the impression that they’re going to work as near-equals to defend truth, justice and the American way. Superwoman is less experienced and seems less powerful, but she comes across more like a partner than does a sidekick such as, say, contemporary Robin.

Otherwise, she behaves in a very similar way to 1943 Superman.

(Punching mobsters out) “This is more fun than knitting socks !”

“You don’t have to be frightened anymore ! *Superwoman* is here to help you !”

“Now to look for someone in need of a super-being’s aid !”

Helper(s): I used Xavier Fournier’s article  for a handy partial list of subsequent Lois-Lane-as-Superwoman stories. And the stats are derived from the aforelinked Superman of 1942 writeups.org profile by Sean MacDonald. Also, Darci and Brent. 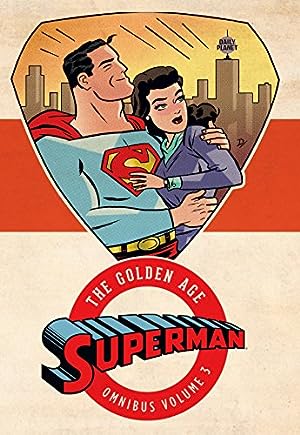 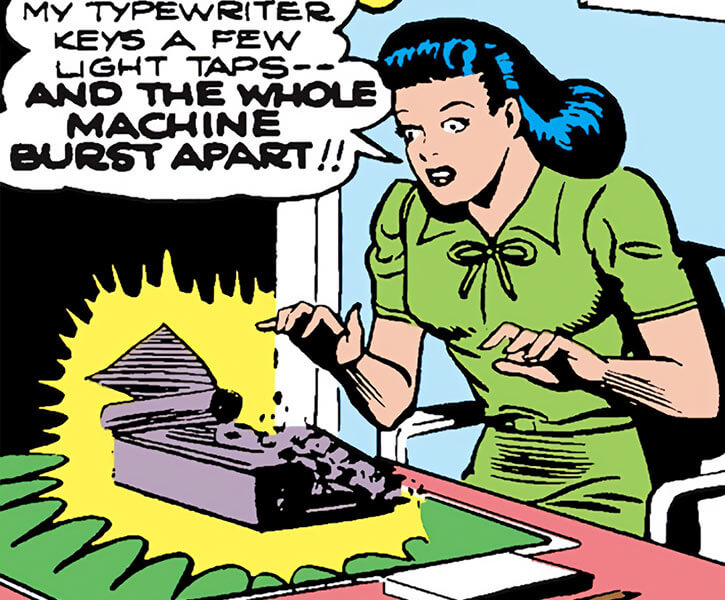 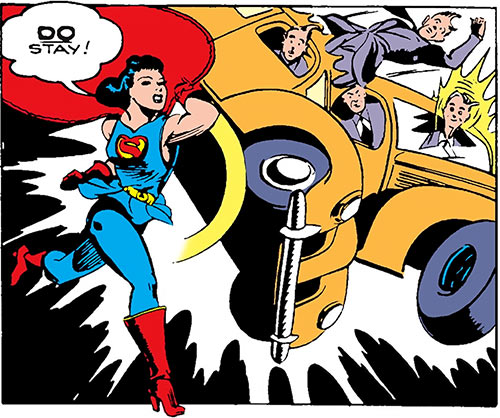 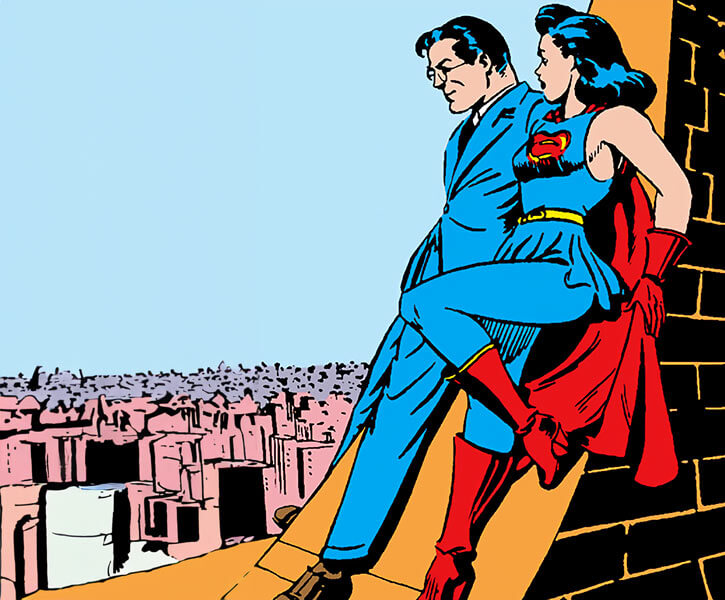