Superwoman has abilities similar to Ultraman’s, though she is apparently not as powerful as he is.

Though she is not as strong as DCU powerhouses such as the Martian Manhunter or Wonder Woman, Superwoman recognizes that fact and will make good use of persuasion attempts or stealth and sneak attacks to avoid direct confrontation with such opponents as much as possible.

She also wields a magic lasso (which she refers to as a leash) that can ensnare others and force them to admit secrets and desires that they are ashamed of.

The Crime Syndicate of Amerika is the JLA of an Earth in an antimatter-universe where good is evil and evil is good. Benedict Arnold was the first U.S. President, Washington was a traitor, Britain fought for its independence against an Amerikan colonial power, etc.

It is a reversed DCU. By and large, things are pretty upbeat in the DCU and people are generally happy, secure and open to the wild and the novel by virtue of living in a world where good always triumphs in the end, thanks to colorful superheroes.

However the dreary inhabitants of the antimatter world live on a planet dominated by lies, greed and hypocrisy (if that world sounds all-too familiar, then you’re just too cynical by half…). Vice and corruption are a way of life and the bad guys always win.

Here crime is the founding principal of society. Evil is rewarded, cruelty is lauded and people live everywhere in fear of their masters all the way through the local mobs and the corrupt police, the bent journalists and up, through City Hall and the governments, to the top of the pyramid – the seedy Crime Syndicate of Amerika and its vicious bullying leader, Ultraman.

The CSA rules their Earth with an iron fist from their lunar headquarters, the Panopticon  (“The place of wide vision” or “watchtower”). Their motto is Cui Bono: Who Benefits. (Interview with Grant Morrison)

Superwoman’s origins and the source of her powers are unknown. Given the similarity of her powers to those of Ultraman’s, and Ultraman’s propensity toward medical experimentation, it is possible that Superwoman’s abilities were conferred upon her somehow by Ultraman. That is sheer speculation, however.

Superwoman is married to the most powerful man in the world, Ultraman. She uses their relationship to continually frustrate him (particularly in her dalliances with Owlman), in large measure due to her contempt for her erstwhile husband.

Owlman has taken advantage of the situation by collecting photographs of Superwoman in affairs with various world leaders and men of influence. He threatens to expose them if Ultraman gets in his way. Ultraman would be humiliated if the world discovered he can’t even control his own wife.

Superwoman is a tall, compact white woman with long black hair. She dresses in trendy formal clothes as Lois Lane. As Superwoman, she wears a simple black one-piece shoulderless bathing suit with short black boots and a short black cape with a yellow lining.

The cape has two silver ovoids on either shoulder with chains leading to a similar ovoid centered between her collarbones and her breasts. This center ovoid has a stylized “S” on it. The final touch on her costume is a black choker made of thin flat metal links with a small opal on the front.

Superwoman delights in tormenting others, especially men, from Ultraman down to lowly Jimmy Olsen. She teases them with suggestions about their hidden desires or the potential of sexual favors from her. Whether this is out of a simple delight in sadism (a trait she has demonstrated in many other circumstances) or as part of more subtle manipulations is left up the GM to decide.

Superwoman isn’t the type to get directly involved in fights, preferring to blast foes at a distance, ensnare them with her lasso, or to attempt to seduce them.

(As Superwoman wreaks havok on Qward) “This is delightful ! Delightful ! Their weapons, their armies — They’ll last weeks !”

Note:
Superwoman and Ultraman have gotten married in separate ceremonies under both their civilian and villainous identities. Superwoman feels no particular loyalty to Ultraman in either identity, though. 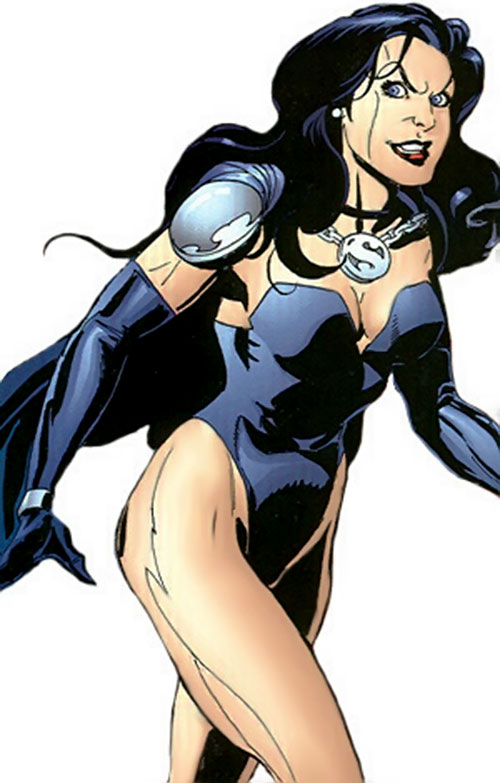