These notes are super-duper old, though. They’re among the oldest archives on the site that still haven’t been redone.

Supreme is an immensely powerful being. He is superstrong, invulnerable, can fly faster than light, can blast several sorts of energies, heals quick, is extremely fast and has supersenses.

Along with this he also is an extremely able scientist and technician capable of building impossible devices such as dimensional ports, Supreme AI, etc. For a living he also writes and edits.

History is very long stretching back decades. For most of it see the most recent Supreme comics from around issue 40 until the last issue of 56 or wait for a later updated write-up.

Basically it is the same as it always has been for previous incarnations of Supreme, but with some real original and cool differences as well as a great supporting cast. I would really recommend this series to anyone interested in Golden/Silver Age heroes !

Supreme is a very muscular and athletic man. He wears a heroic superhero costume of full body white covering all but his arms and head. He also wears reed boots, a red cape, a red chest and back symbol and a pair of thick yellow gloves.

Otherwise he looks like a very powerful and healthy man in his 40s. He gives the impression of being a real hero.

Supreme is the Earth’s Greatest Hero. He has a forceful and kind personality that radiates fairness and goodness. Basically, in short, his personality is nearly the same than that of DCs Silver Age Superman with slight variations.

He abandons his own happiness for being able to protect humanity better. Supreme would never kill a living being even when it would be for the best. All life is sacred for him to the degree that he would protect it at any cost.

Being an immensely powerful being he still copes well with his humanity and wields his power with care and responsibility. He is a person who is very easy to trust and befriend and apparently saving mankind is what really makes him happy.

“Then I suggest it’s time for the return of The Allies !”

Well, Supreme really is a carbon copy of Superman and thus Supreme is Superman in the DC Universe. A story containing parallel universes might very well have Supreme be a human version of Superman (i.e. non-Kryptonian).

Equipment:
Suprematons, Supercomputers, a portal to the Hell of Mirrors and much more. 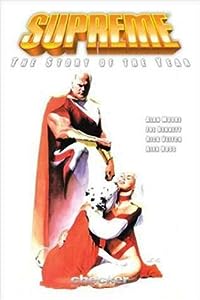