During the Second World War, the US Government began to experiment on human subjects in an attempt to create superhumans. Supreme was supposedly killed in the first experiment but when they opened his casket he was found still breathing.

Apparently their experiments worked on some level. Supreme had gained remarkable regenerative and adaptive abilities, even beyond death. They ran more experiments. Supreme seemed to die again only to come back stronger than ever. After 13 repetitions of this they found it impossible to duplicate the process again (without resorting to nuclear arms).

When finally revived Supreme had no knowledge of what had transpired. Thus, the government was given the chance to manipulate him. They gave him the public persona of Supreme and sent him off to battle the Nazi threat.

Supreme went on to win several decisive victories in the name of the US, even against a Nazi controlled Thor (really). After the war Supreme began to grow restless and insanely egotistical. He left the planet without a word.

30 years or so later he returned, curious as to how HIS planet was doing in his absence. Upon arriving in Earth’s orbit he battled the US government super team of Youngblood. He won easily, proving to the world that Supreme had returned.

After this Supreme lost some of his powers, he battled Thor again and took his hammer. See the Supreme (thunder god) profile for more.

Supreme thinks himself to be a God. He talks down to everyone and never doubts his ability to beat a foe. Others are not worth talking to and would just get in his way.

Just make him a Cadmus Superman cloning experiment or a LexCorp anti-Superman. You could quite easily keep his origin just as it is though. 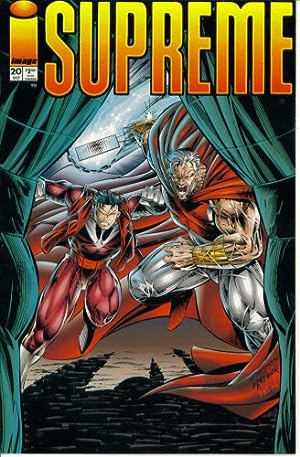