Surge is an organic electrical generator. He’s thus able to electrify his body and shoots powerful lightning bolts from his fists.

The DNAgents were designed to be a commando squad that could take care of Matrix’s dirty work, from espionage to paramilitary action.

Surge was the first to make it off the drawing board. He was designed around the concept of a “living dynamo”.

Being the first design, Matrix scientists thought they would take a very simple premise and work from here. Seeing as how the organisms were grown in a highly energized environment, it should have been rather simple to develop a life form that could contain this energy and release it at a whim. Sort of like an electric eel.

After some study, it was discovered that the conscious effort to keep such immense amounts of energy in check would be overwhelming. Therefore, a regulator was designed to do that job for the life form.

Surge, as the first DNAgent concept came to be called, would be potentially very powerful, yet at the same time relatively inexpensive and easy to produce. This idea appealed to Matrix president Lucius Krell so much that he volunteered to become Surge’s genetic father. Following this was a brief ceremony where he passed out cigars.

At the very end of the series, the DNAgents were captured by Matrix and put back into the vats for future use. This came after Matrix convinced the public that everything to do with the DNAgents was just a big media hoax.

He wears a skintight leather jacket, open to the front, black jeans and gray buccaneer boots. He also sports red tinted goggles so as not to be dazzled by his own lightning flashes.

“Life is a series of confrontations” seems to be Surge’s personal philosophy. And he seeks to win them all with a fierce aggressiveness.

Surge functions on a highly emotional, occasionally child-like level. He often demonstrates supreme self-confidence and egotism. He tends not to worry too much about surrounding threats in combat once he starts blasting.

This self-confidence backfires on him the moment he fails at anything. When that happens, Surge begins to perceive himself as a total failure. In life, you are either a winner or a loser, by his way of thinking.

He often displays the attitude that everything in life is black or white, good or evil, right or wrong, with no in-betweens. Perhaps he keeps this outlook to avoid the frustrating realization that life just isn’t that simple, or that fair.

Among the DNAgents he has formed the strongest emotional tie to someone outside the group. He loves the replicant of Krell’s daughter, Angela. Since her death, he has built up their relationship in his mind into some great love affair that never really happened. It is something he agonizes over. That agony is what has driven him to attempt to murder the assassin, Luger.

In a fight, he will usually stick to his devastating electrical attacks. If this would make a fight unfair, he will engage an opponent in simple hand-to-hand combat, using his enhanced strength. Also, when he loses his temper, he gains more satisfaction by physically hitting things.

Surge will never back down from a fight and, once in one, will never surrender.

Also, there was a Tales of the Teen Titans issue where a DNAgents-like group (the RECOMbatants) showed up, only to sacrifice themselves at the end issue. In that month’s issue of DNAgents, a Titans-like group, Youngblood, showed up, dying in a similar manner.

Drawbacks:
MPI (highly emotional and aggressive), Minor Rage, Misc : Surge must wear regulators, otherwise the energy in his body will go wild (attacks almost everything within 4 APs with his Lightning, no penalty for multi-attacks, uncontrollable), Misc : The DNAgents are highly dependent upon Matrix, who does not always work in the DNAgents best interest (10).
Note that the MPI and Minor Rage disappeared at the end of the series.

Source of Character: DNAgents comics (Surge and the DNAgents were created by Mark Evanier). 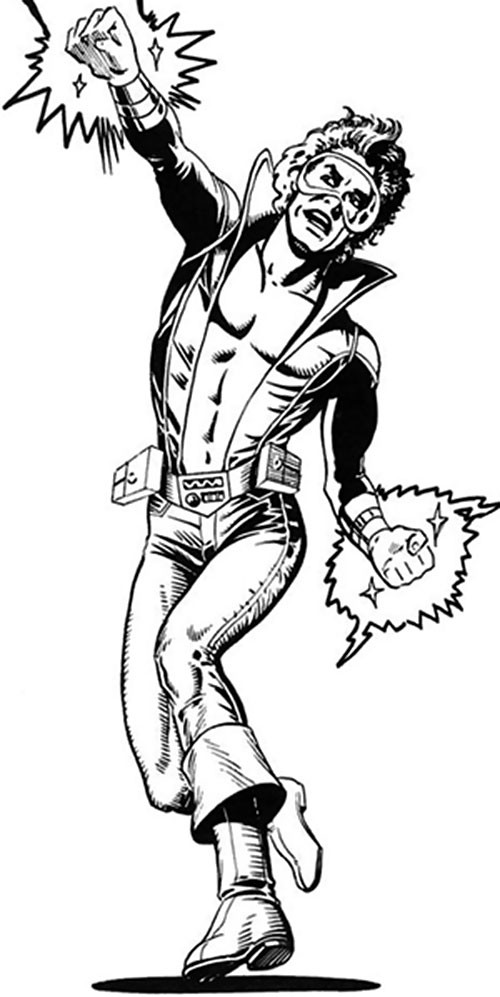