Suspiria is in peak physical conditions, is very sharp and is a highly trained and talented assassin.

She’s highly dangerous, fights with little honour or humanity and can out-Bauer Bauer.

Suspiria is an Italian assassin. Her reputation is so fearsome that most believe her to be a myth, an underworld urban legend.

Years ago, an unspecified Camorra family  attempted to take over the wine business of a Cosa Nostra family, the Napolitano. Don Napolitano hired the shadowy Suspiria to strike back.

She wiped out their rivals so thoroughly that the Napolitano regained complete control over the region. Predictably, they kept her on retainer. However, by that point, Suspiria was drifting out of organized crime. She was now married and a mother. Thus, she increasingly wanted to retire to enjoy her wealth and family life.

While they were vacationing on the French Riviera, Suspiria’s family was hit by Vincent Carraciola. He was an Italian arms dealer who foolishly tried to blackmail the legendary but mostly retired Suspiria into working for him. He killed her husband and kidnapped her daughter. Carraciola then forced Suspiria to conduct a series of brutal hits lest he torture and kill her daughter.

Who punishes the Punisher ?

In 2005, the Punisher slaughtered five family heads of the Napolitano clan. The most ambitious of their widows, Regina, decided to do something. She convinced the other widows to help pay for a two millions hit, plus half a million for expenses.

This budget was to hire Suspiria to terminate the Punisher. Being Suspiria’s cousin, Regina was well-versed enough in Napolitano lore to know she wasn’t a legend. 48 hours later, the Sicilian killer was in New York City. Apparently, she knew a lot about the Punisher, including his background, and was eager to meet him.

Suspiria hired a female mercenary as a decoy, giving her a black wig and a sniper rifle. Suspiria told the mercenary to kill a Christmas reveller in Time Square every five minutes. She then contacted the police, claiming high explosives had been placed under Time Square and would be detonated if they counter-sniped her agent. There wasn’t actually any bomb.

The next step was to have a tape diffused by TV stations, claiming the killing in Time Square would continue until the Punisher showed up. Not knowing about the bomb threat, the Punisher shot the mercenary dead. This allowed Suspiria to spot him and track him, as planned.

Instead of simply blowing the place up, she burst in and mostly stuck with close combat with knives, pistols and martial arts. The Punisher eventually gained the upper hand and tried to interrogate her. She refused to talk unless he kissed her. When he did so she told him about her cousin. The Punisher then threw Suspiria off a roof, and slaughtered Regina Napolitano.

Suspiria survived the fall against all odds. After nine months of intensive physical therapy was able to walk again. In fact, she did not even evidence a limp.

However, while Suspiria was in intensive care Carraciola grew paranoid. He came to believe that she had been hired by a rival. Writing her off, he let his associate, the international criminal and paedophile Herman “the German” Zeufrieden, have Suspiria’s daughter.

Zeufrieden was operating a child-smuggling ring. Carraciola tried to use it as a diversion to smuggle weapons into New York. However, the weapons were being tracked by the Punisher.

Furthermore, the now-recovered Suspiria, tracking her daughter down, started working her way Carraciola’s network. In so doing, she accepted a contract from a US Senator. The Senator’s son had been kidnapped to boost Zeufrieden’s profile.

Suspiria and the Punisher agreed to ally. Though he was highly suspicious of a woman who had tried to kill him before, Castiglione was obviously attracted to her.

Suspiria, her assistants and the Punisher managed to completely outmaneuver Carraciola and Zeufrieden. They then killed both men in rapid succession. This led to the discovery of information about the whereabouts of Suspiria’s daughter. She had been sold to a family in Hamburg.

At that point, Suspiria was pardoned by the Italian government. She offered information in exchange, plus her services for the SISMI intelligence agency . Now an official spook and hitwoman, Suspiria nevertheless spent a night with the Punisher. She then flew off to recover her daughter before she would start her new job.

Note the discreet skull motif on her “costume” (which she apparently was wearing solely for the benefit of the Punisher). She has a number of scars over her body.

Hard to say from the writing. She’s a ruthless, pragmatic professional. Why she throws herself at the Punisher is… unclear. It seems based on their common trauma.

Her style is not unlike the Punisher’s, with an added vindictive and manipulative streak. While working to recover her daughter, she never hesitated to resort to torture to gain information.

“We know pain better than most, no ? The loss of family, the losses of love… the unquenchable thirst to right the wrongs that were done to us.”

“Don’t think I’ve forgotten what you did to me. Good thing for you, forgiveness is an attribute of the strong.”

“What works for me is this: you’re going to tell me everything I need to know. Hesitate and I start taking off body parts.”

Equipment:
Suspiria adapts her arsenal depending on the mission ; she has been seen wielding the following:

Suspiria has at least three other young, attractive women on retainer. She calls them her “sisters” and treat them like close friends. Therefore, the decoy she used in her first encounter with Castle was likely not such a long-term assistant.

Except for Karen, they are only briefly seen. But all work to prepare Suspiria’s hits by procuring information, doing reconnaissance, surveilling security, pre-placing weapons and explosives, etc.

(Reacting to a threat from the Punisher) “He’s cute. Can we keep him ?”

(Watching approaching attackers) “Altogether 16. Some new faces, freelancers. Whatever you did pissed someone off.”

Drawbacks:
Misc.: She does not seem to speak English.

“They’re inside. They killed Cyber.”

Drawbacks:
Misc.: She does not seem to speak English.

Pet:
Attack dog (her dog in the story, Cyber, was killed but presumably replaced) 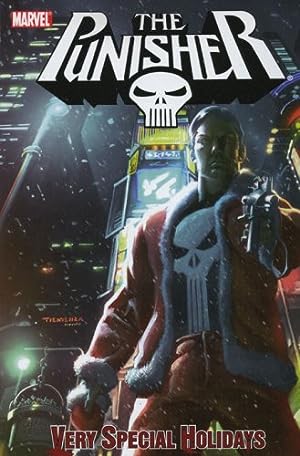 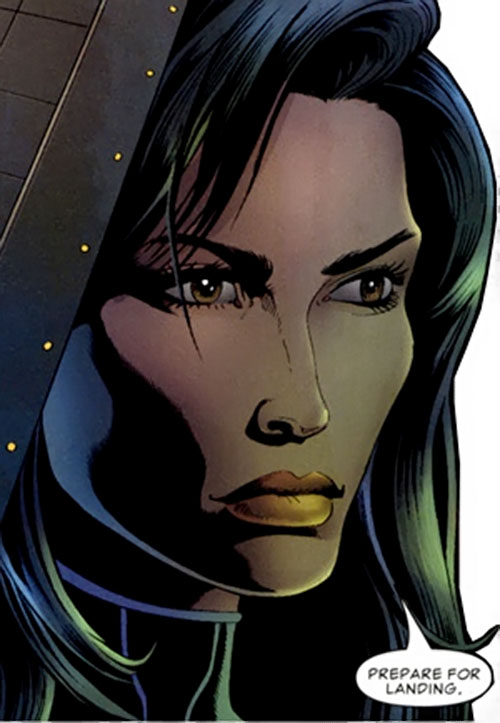 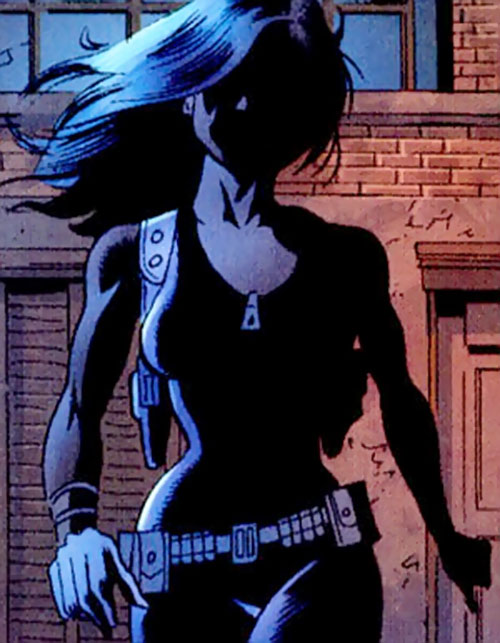