Svetlana X is superhumanly fast, strong and tough. She is a mistress hand-to-hand combatant – on the level of Tom Strong himself, if not greater. She greatly enjoys danger, exploration and fighting. She seems devoid of fear.

Svetlana hits with literally bone-smashing strength (Martial Artist subbing for EV in DC Heroes, Power Attack in DC Adventures). Her fighting skill and superhuman strength are sufficient for her to take on hordes of giant ants and the like.

The strength level given in the game stats is conservative. This is because she was never seen lifting objects weighing multiple tons or punching through hard materials. But given the effects of her punches and kicks on living beings, it wouldn’t be surprising if she were in the 5-to-10-tons range.

Svetlana X has a very broad skills base and decades of experience in adventuring. She can confidently do all sorts of specialised things such as piloting Soviet space vehicles or setting up nuclear bombs. She’s clearly not a scientist or technologist, though. She’s called a “science heroine” once, but that’s probably a reference to whatever the source of her superhuman strength is.

On Tom Strong’s world, Svetlana X is the protector and heroine of the Soviet Union – where she is highly popular. She has been called “Tom Strong’s opposite number in Russia”. This and other bits of dialogue hint at the two having clashed back during the Cold War.

But by the 1990s, the two were allies and were routinely collaborating to save the Earth. While some tension remained, it was agreed-upon procedure for X and Strong to call on each other’s assistance when needed.

Svetlana X has been active since at least the 1940s. Tom Strong said he met her at Stalingrad where she turned the tide, and with no further context one assumes that this meant the WWII Battle of Stalingrad. Presumably Comrade X and Tom Strong had their first team-up there to foil some sort of Nazi super-soldier or super-weapon circa 1942.

On Tom Strong’s Earth, the Soviet Union apparently fared much better than it did in the real world. One gets the impression that it was less dictatorial and had less of a corruption problem. This resulted in a wealthier nation that found it easier to maintain its policies.

One scene set in Moscow in 2002 had Tom Strong describe the country’s policies as Communist. Nobody finds this remarkable – and throughout the city, on the uniforms, on vehicles… the Soviet symbols, such as the hammer and sickle, are readily visible. Comrade X’s uniforms are all clearly marked with a red star and the CCCP (“USSR”) inscription.

There has obviously been some sort of détente, since the Cold War is over. Svetlana also referred to the Politburo as “the old days”. It generally seemed that the country was more free and prosperous than the real USSR ever was.

The USSR also seems less centralised. Svetlana was always concerned about Russia, not the Union, so it seems likely that the other Socialist Republics became more independent (but likely not breaking away completely, since the Union still exists. Perhaps it has become an EU-like structure dominated by Russia ?).

The country also had a comic-book-level space program, with orbiting research labs and enough space shuttles for Svetlana to work using satellites whenever needed.

It is entirely possible that the USSR on this world fared better because of Svetlana X’s decades-long service.

Comrade X is often helped by her husband Dimitri — she has mentioned that she owed him many favours, and their marriage might be the result of one such favour. The Rasputin -like Dimitri is primarily reputed for his sexual prowess and short size, but seems to have other specialised skills that have proven useful to Svetlana. 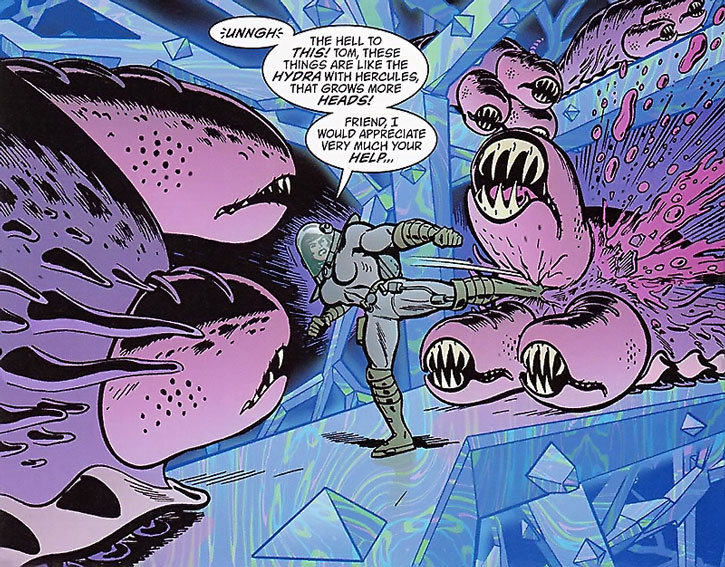 He’s probably not a specialist in the hard sciences, though. Svetlana calls on Tom Strong when it comes to those and she joked about Dimitri not being a technical expert.

In the real world, Stalin’s only daughter was named Svetlana, so Comrade X might be a parallel version of Svetlana Iosifovna Alliluyeva , whom Stalin had with his second wife Nadezhda Alliluyeva in 1926. That would explain why she is known as just “Svetlana X”. It also matches Comrade X being already active by the Battle of Stalingrad.

Heroine of the motherland

In 2001 Svetlana X requested Strong’s help in investigating LEM15, an orbiting particles lab which had gone offline. The pair discovered that the inside of an exotic particle had warped reality inside the LEM and corrupted everything. After a fighting retreat Comrade X took the decision to destroy the station with a nuclear charge.

Svetlana and Dimitri then took Tom to have coffee in downtown Moscow.

The following year, Svetlana X was one of the adventurers Tom Strong summoned to help against the invasion of the giant slaver ants from outer space. She was the one who accompanied Strong in the field when invading the space anthill.

Some months later, Comrade X and her husband again helped by providing orbital thermal imaging from a Soviet satellite. That allowed Tom Strong to locate a cold-wielding villain in the US.

She also attended some social events organised by the Strongs.

Svetlana is really tall. Though she’s not stunning or built like a model (her physique is more that of a very strong athlete or wrestler) she possesses considerable sex appeal due to her sheer vitality. It is possible that her appearance was based on New Zealand actress Lucy Lawless during the Xena years.

Svetlana is very direct and lively. She has a straightforward, powerful, positive, simple personality. She particularly enjoys sex and adventuring, as is quite obvious from her remarks and very frank conversation. She has never hesitated to comment on Tom Strong’s buttocks, and generally cannot be bothered with such things as tact and being appropriate.

Svetlana is open-minded and enthusiastic about just everything.

Svetlana X speaks fluent English. Yet she somehow gets all the colloquialisms wrong, all the time – usually by using a synonym instead of the usual term in the phrase. She doesn’t care about getting her expressions right, though. 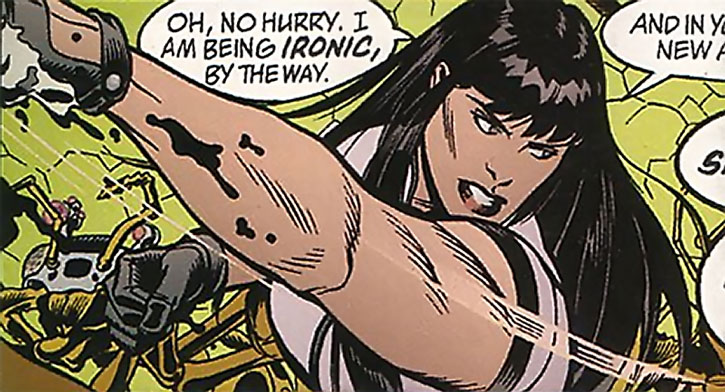 Her general outlook and a comment from Tom may indicate that she believes in the ways of the romanticised version of the Cossacks. Live free, live fast, have no fear, enjoy yourself, don’t bother with society’s choking rules more than necessary, and help your band no matter what. Which would be rather ironic if she’s indeed related to Stalin.

Svetlana is a Russian patriot (and something of a Soviet patriot, though the status of the other Republics is not clear). She also believes in the virtue of Communism, which seems to have fared better on her Earth than our own. However she’s here to defend them against physical attacks – not to brandish the flag or stand on a ideological soapbox.

The most in-your-face she ever gets about this is to refer to the United States of America as a “noble but misguided country”. And she’s as relaxed about this as she’s about everything else.

“I hope Dalhua is not urinated with me.”

“*This* is your surprise reinforcement ? An Aztec snail ?”

“I knew that. I’m just giving you feces.”

“Those molecular agitators are the dung ! You’ve got to make me some.”

“Tom, it’s all wrong with the gravity. There are many middles to it, you know what I’m saying ?”

“And I thought those pouches on your belt were for condoms only.”

“Ha ! Dimitri is an ugly little smartass, like always. I ought to smack him good but damn, you know ? The sex, it’s unbelievable.”

In the DCU, Svetlana X would be Stalnoivolk’s daughter, conceived in 1953 just before his exile. Though Stalnoivolk is unaware that he has a daughter, she was raised and trained in secret by the KGB. Svetlana X often fought a splinter branch of the Kobra organisation, virulently opposed to the USSR and manipulated by MI6.

Or the actual Comrade X, who obviously has plenty of weird adventures, could simply end up on DC Earth after some dimensional travelling. And no matter who brought her there, Svetlana is going to make sure that the problem is properly grappled. 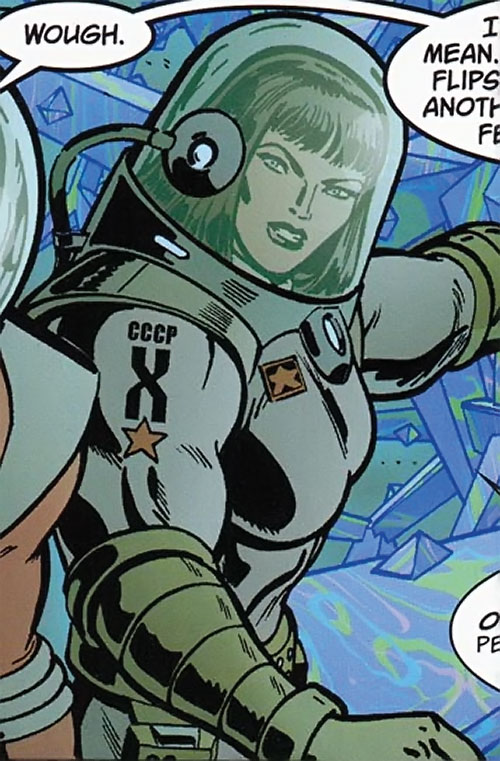 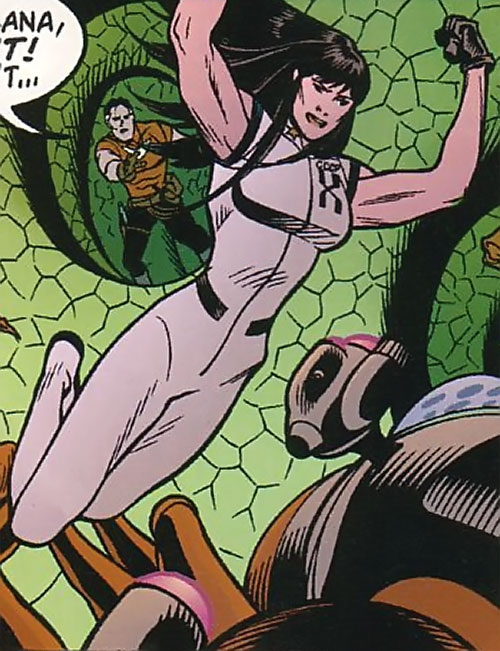 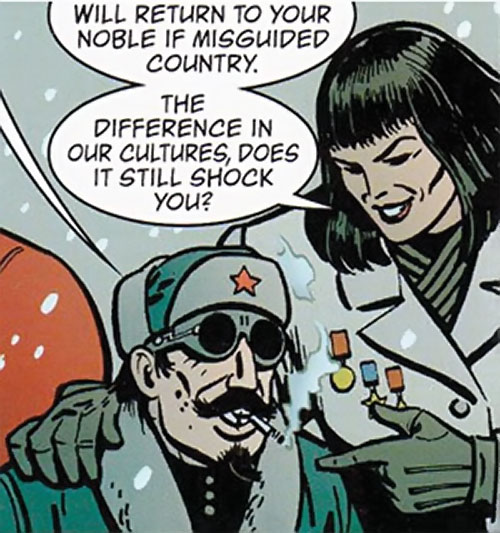 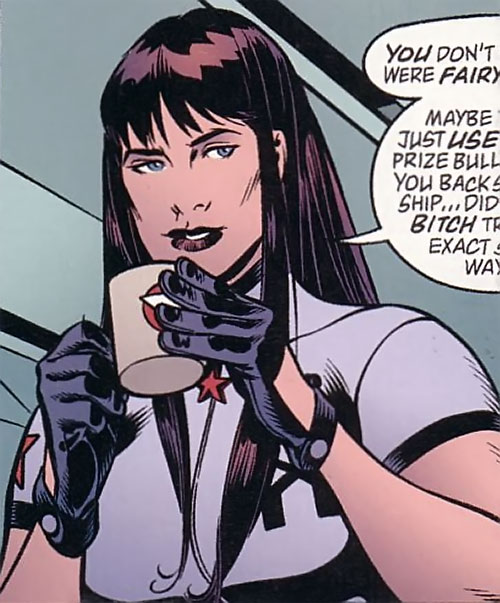