Swarm is a Marvel villain. In this profile, we cover the version that appeared in 1981, in an episode of the Spider-Man and his Amazing Friends children’s cartoon.

Not recommended for the entomophobic, I’d say.

Swarm appears as a humanoid bee person. He’s made up of thousands of bees flying or clinging to one another. When attacks are made against him he can easily separate, then move back together.

Even though he is essentially bees clustered together, Swarm can interact with the world as if he had an ordinary body. For instance he can grab and hold objects in his “hands”.

The alien entity known as Swarm controls all the bees at once. He can be recognized by the large blue eyes set in the head of his humanoid form. 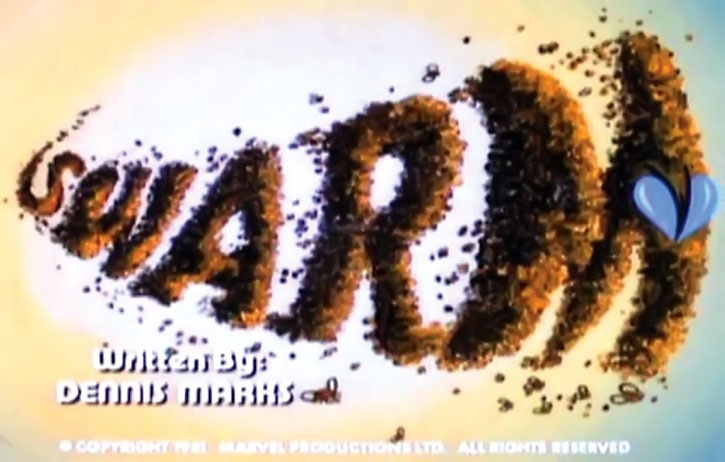 From these eyes blue beams of energy may originate. These have various effects, ranging from enlarging their target to being a destructive energy beam to controlling the mind of their target. If striking a human, Swarm may choose to control their mind and mutate them into humanoid bee people. These have large bee-like wings, antennae, and two bee legs atop their shoulders.

If the control is lost, all the bee-like additional parts will fall away. This returns the victim to their natural state.

Of Course, Swarm could probably separate his bee body into any number of component insects. But all we see him do is separate his two arms from the rest of his form and they attack independently.

You will be assimilated

He immediately begins assimilating the life of all creatures on the planet to his will. On Earth, he took bee colonies as his local template.

Swarm can also master alien languages extremely quickly. This facilitates communicating his needs and wants to his alien servants

Swarm uses his eyebeams to grow normal sized bees from the hive into giant bees. These specimens are as big as a mid-sized automobile. 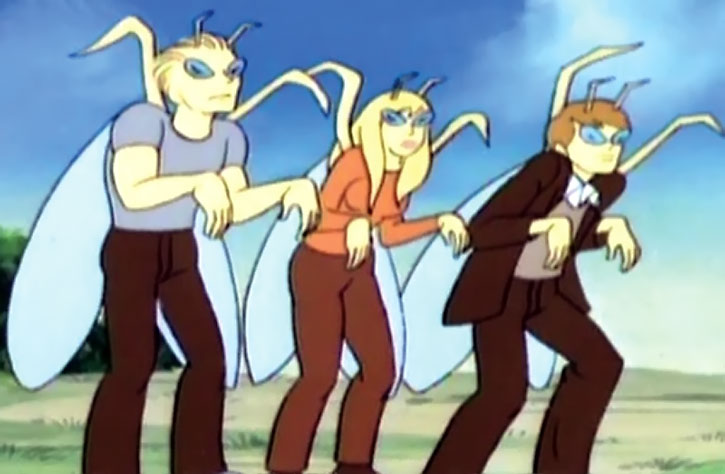 The transformation usually includes some sort of mind alteration. This makes the new servant both obedient and unemotional about the fate of their friends and family. After escaping Control; targets will not remember what they did during their time as Bee People.

A blue meteor from space landed near a farm. It broke into two halves, lying just below a hive of common honey bees. The bees of the hive swarmed out of their nest and lingered in the air.

All the bees from the surrounding area vacated their hive homes. They came together hovering above the meteor as one giant swarm. The many swarms of bees moved as a unified, humanoid form with unnatural blue glowing eyes.

A nearby farmer came to investigate. He was turned into the first Human Drone. Firestar witnessed this and engaged Swarm and his new minion in combat. Given, Swarm’s power, she flies away to get the guys.

Swarm makes some of the normal bees giant-sized and instructs them to bring him more drones. The giant bees fly into New York City to grab citizens off the street, including Spider-Man’s Aunt May. The Spider-Friends show up to stop him, but Swarm fights back. 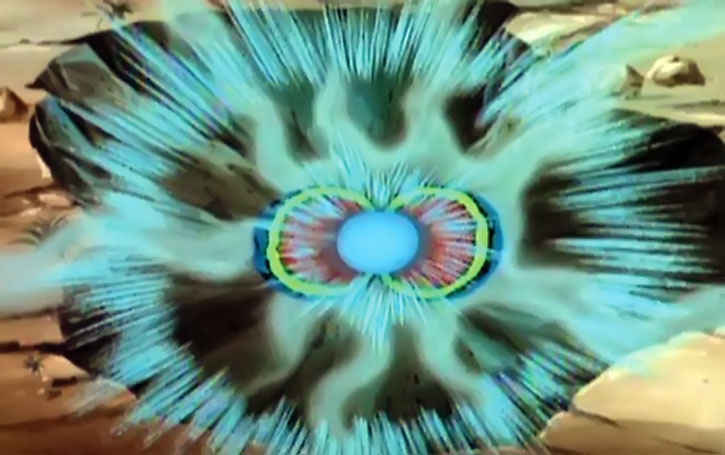 Due to the radiation in his blood stream, the zap has no effect on Spidey. But on their end, Iceman and Firestar don’t fare so well. Spidey leads his amazing friends, now bee-people, into a lead lined room. This breaks the radiation effect and transforms them back to normal.

The team then heads back to the hive, disguised as bee-people. They grab the meteor, run with it to the ESU science lab, and use a rocket to send it back into space.

Without the source of his power, Swarm dissipates and everything returns to normal.

A humanoid form made of flying bees, with a bee shaped, antennaed head. Swarm has glowing blue, reflective eyes.

Swarm is king of his colony. In his mind everything and everyone else is here to do his bidding.

His only interaction with the people he meets is to scream “Swarm!” at them and try to take control of them with his eye-beams.

When met with stronger opponents like the Spider Friends he briefly tried to persuade them to join the hive before attacking.

“Hahahaha, everyone will work for Swarm !” 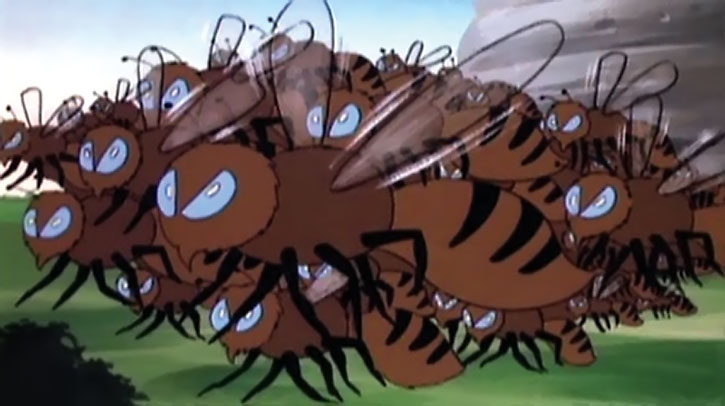 Swarm: “You are good workers. Join ! Join Swarm and work as one for the community hive.”
Spider-Man: “We are humans not insects. We are separate individuals with our own minds, our own lives !”
Swarm (attacking with eyebeams): “Individual thought breeds chaos. All will work for Swarm ! For the universal community hive.”

Drawbacks:
Loss Vulnerability: The meteor is the source of Swarm’s power if it is 08 APs of distance away, Swarm’s powers drop to 00APs, Strange Appearance.

“Swarm, Swarm, Swarm is my master. I am a worker, I work for Swarm.”
A 096 points Character

Note:
If a named character is transformed by the beams they will gain Extra-Limb (X2): 00 and Flight (Winged): 05. 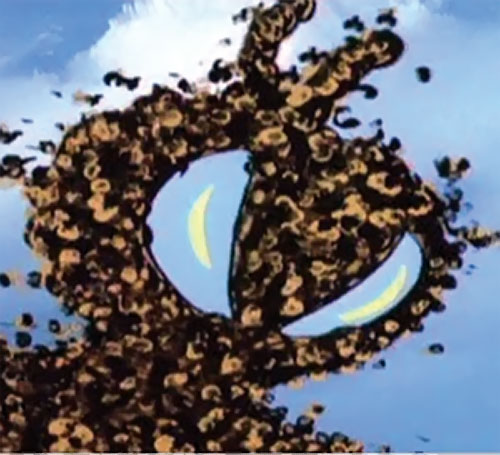 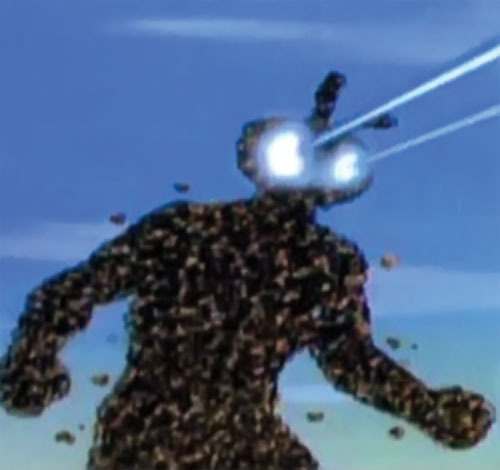 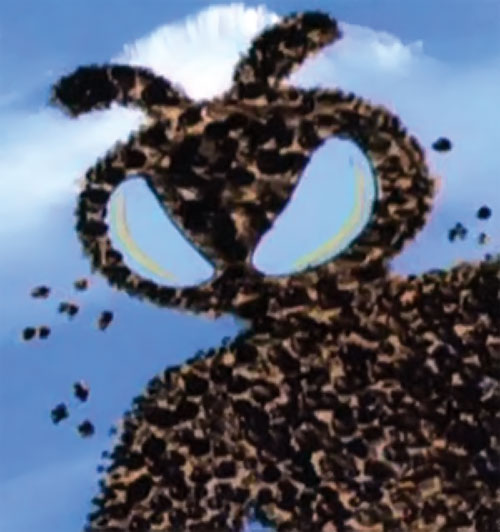 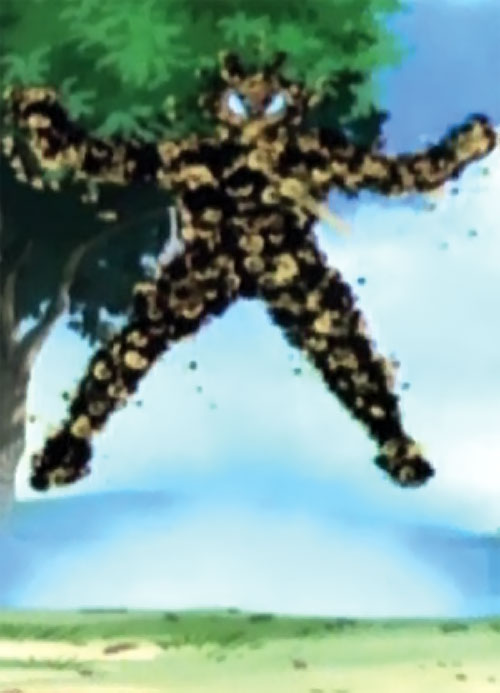