Swift was one of the main characters in The Authority, albeit less prominent than her teammates. The Authority was big during the early 2000s, as a charismatic take on high-spectacle, loud, big-screen-like super-hero comic books with an edge.

Howbeit, this is a *very early* writeup. It was done before The Authority, back when Swift featured in the Warren Ellis run on StormWatch. I loved that run ! This profile should be redone and expanded, but since I’m allergic to Millar…

For context, those unfamiliar with the material can read the Stormwatch organisation profile.

Swift’s most obvious power is the set of bird-like wings jutting from her back. She can fly rapidly, and make her hands and feet into talons.

When the superhuman members of the StormWatch agency were decimated during the Despot crisis, the UN found itself facing a severe shortage in metahuman manpower. They thus recruited various superhumans from all over the world.

Most of these rookies didn’t make it after the first few missions. But Swift was accepted over the objections of the Chinese delegation to the United Nations.

Shen “Swift” Li-Min is from Tibet. She was part of the resistance movement against the Chinese. When she was confirmed as a UN officer, she asked Synergy, a StormWatch member with control over metahuman powers, to fully activate her powers.

After several days of thrashing around and screaming in pain, Shen finally recovered. Her wings are now more powerful, and she gained the ability to morph her hands and/or feet into talons. Swift has proven her worth during several missions.

Swift works for StormWatch Black, along with Jenny Sparks and Hawksmoor. This is a semi-undercover op team working for the UN. In the Wildstorm universe, the UN is secretly a menacing worldwide conspiracy led by gun-toting, paranoid “Secret Masters”.

While they are heroes, the operatives of StormWatch (especially StormWatch Black) are quite ruthless. They do not hesitate do violate the rights of a country in order to advance the agenda of the UN.

Swift is 23, and looks mostly Chinese. She has two Angel-sized wings that look like those from a bird of prey.

She dresses with a full body skintight black leather jumpsuit, a brown duster and a pair of goggles. Her hair are styled in a modern way.

Swift strongly believes in her obligation to help civilians against totalitarian governments or criminals. While she doesn’t like using violence due to her religious and cultural convictions, she’s quite adept at fighting. Her “pacifism” is limited in that she’ll coldly use violence mostly to prevent more violence.

She has an excellent tactical sense, and her surprise diving talon attacks or ability to move her teammates around makes her quite efficient.

While she can have an attitude and certainly has a cause, she’s mostly reserved.

She could replace Owlwoman in the Global Guardians. 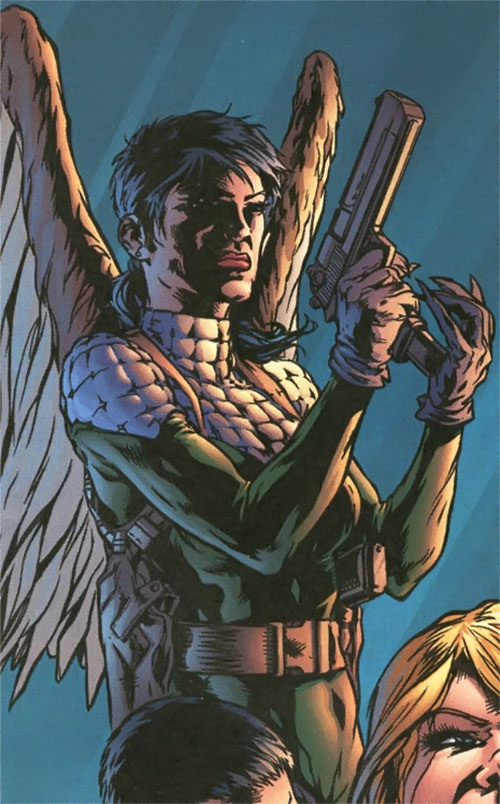