The Swiss was an early Richard Dragon enemy, back in 1975. He also plays a critical role in the backstory of Lady Shiva.

The Swiss is a sadistic killer. He wields poisoned needles, and his connections allow for procure weapons, mercenaries, vehicles, etc. in a surprisingly short time.

The Swiss can commit to a decision with startling speed – often to flee before opponents can react. His brain apparently has a “fight” mode and a “flee” mode, and nothing in-between.

The Swiss has a knack for recruiting thugs, sometimes within mere hours. Although those will usually be street toughs with street weaponry, he can also recruit a variety of melee combat specialists.

The Swiss recruits such thugs in derelict, ill-famed martial arts schools. He tends to alternate between groups of hand-to-hand combat specialists and groups of melee weapons masters.

In DC Heroes, use the stats from our Stock Thugs article. The Swiss will usually hire Beefy Street Thugs, Evil Karateka and Evil Weapon Masters.

The Swiss was a professional killer and interrogator. He was hired by the crime lord Guano Cravat to force a scientist, Mr. Shiruto, to reveal industrial secrets about lasers. However Shiruto fled, then committed suicide before the Swiss could torture him. The killers theorized that he had mailed the secrets to his niece, Carolyn Woosan.

The Swiss sent thugs after Woosan as she was leaving the Japanese monastery of her godfather, the O-Sensei. As it turned out, the young woman was accompanied by the two star students of the O-Sensei, Benjamin Turner and Richard Dragon. These made short work of the attackers. The trio left for New York City, where Dragon intended to open a dojo and where Woosan was due to study.

Another assault by the Swiss’s thugs got lucky. They kidnapped Carolyn and wounded Turner. Dragon gave chase, but the Swiss kept narrowly escaping with the captive Woosan.

The Swiss managed to lose Dragon by using a napalm bomb to cover his tracks. But Barney Ling of G.O.O.D. provided Dragon with intelligence. It allowed the kung-fu fighter to corner the Swiss in one of the dojos of ill repute where he recruited goons.

For a time it seemed that the Swiss would manage to escape again. But Dragon did not lose him and pursued. Panicking, the Swiss attempted to force his bike and sidecar between a truck and a security fence, and crashed. Carolyn Woosan died in the crash, expiring in Dragon’s arms.

Dragon gave chase to the terrified Swiss and executed him with his bare hands.

There are contradictions between the original account of Carolyn Woosan’s death and later retelling as a new character — David Cain — was introduced.

Our No Prize Hypothesis  goes as follow. The Swiss was left empty-handed after Mr. Shiruto killed himself, and it was David Cain who fed him a rumour saying that Shiruto had mailed his papers to his niece Carolyn Woosan.

This minor alteration allows both versions of the story to work seamlessly.

The Swiss is a devoted sadist and a psychopath. Torture is his greatest pleasure. He enjoys playing games with his opponent as long as those inflict physical or emotional pain.

His behaviour seems to be coldly professional at first. But the Swiss is actually very emotional. In dangerous situations he can switch from abject terror to squeals of glee within seconds as the fight shifts.

His sudden shifts between a fighting stance and a fleeing stance often play in the Swiss’s favour. Given his absence of pride, he will often take the decision to flee earlier than most. And this gives him a much better chance to actually get away even from vastly faster opponents. And if the fight turns against his foe, the Swiss has no problem changing his mind and aborting his flight.

The Swiss knows he’s no warrior. Although he has no qualms facing ordinary persons alone, he will hire thugs when facing physically adept foes. He will also have at least one reliable mean of getaway nearby, more often two.

“Excellent ! I hoped you would refuse ! I do enjoy… persuading people !”

“You fool ! How dare you destroy yourself… and cheat me of my pleasure !” 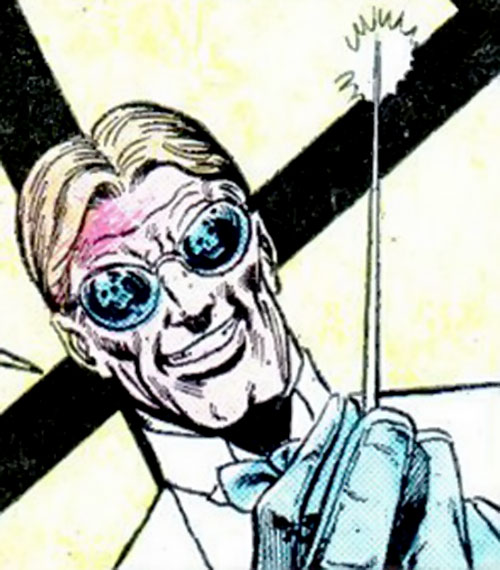