Duquesne possesses no superhuman powers, but is a world-class swords specialist.

His signature sword was his Mwakluan blade outfitted with several devices, including a disintegration beam, an electrical discharge, a flamethrower, and stun gas spray.

The Swordsman was a star performer at various circuses and carnivals. He did an act demonstrating his extraordinary mastery of knives, swords, and other bladed weapons. At one such carnival, he met a boy named Clint Barton in whom he saw great talent for archery. The Swordsman trained the boy to be a secondary performer in his act.

Eventually, the Swordsman came under pressure to repay a large gambling debt. When the carnival paymaster was robbed and Barton found the Swordsman in possession of the money, Barton fled in panic onto the high wire, which the Swordsman slashed by hurling his sword.

Barton fell to the ground, and the Swordsman left him for dead. Barton survived and grew up to become the costumed adventurer Hawkeye.

Over the years following his attempted murder of Barton, the Swordsman led a criminal career in Europe in his costumed identity. Returning to the United States, he offered his services to the Avengers, intending to use his Avengers status to commit even greater crimes. Rejected, he entrapped and unsuccessfully tried to kill Captain America. 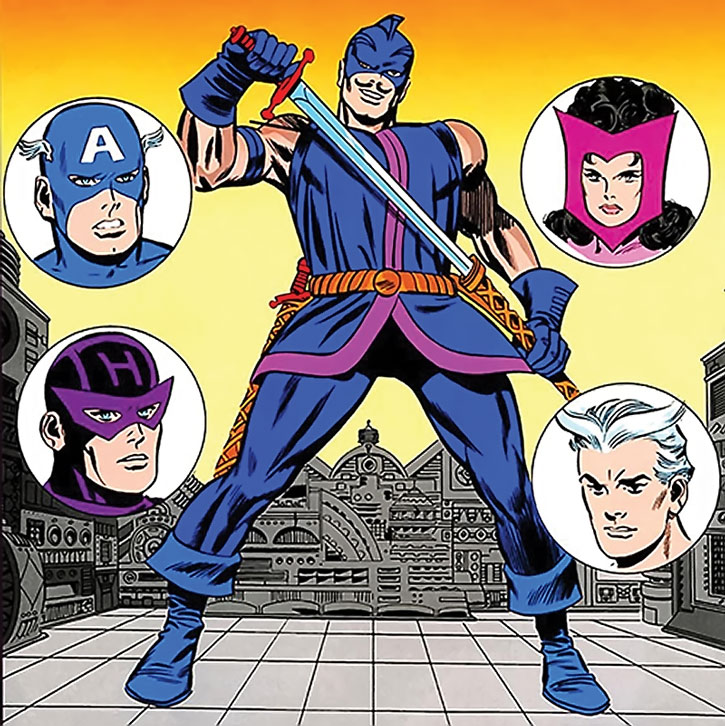 Captain America and Hawkeye saw him and thought he was planting the bomb. A fight ensued between the Swordsman and the Avengers, ending with the Swordsman’s escape.

The Swordsman returned to crime. The Black Widow, who had recently been brainwashed by Communist Chinese intelligence, enlisted him in an unsuccessful assault on the Avengers. She teamed him with his frequent partner-in-crime, the original Power Man (now known as Atlas) on the venture. The Swordsman and Power Man team was later recruited by the Red Skull to battle Captain America.

During the following years, the Swordsman made several alliances including membership in both Batroc’s Brigade and the Grim Reaper’s Lethal Legion. He eventually turned back to crime in areas where he was unlikely to encounter Captain America or the Avengers.

He traveled the world, engaging in criminal activities. But part of him longed for the noble purpose he had briefly felt as an Avenger. Indeed, at one point this longing was so strong that he accompanied the Avengers in their battle to free the realm of the Olympian gods from conquest by Ares and the Enchantress.

The Swordsman returned to crime, but his heart was no longer in it. Hunted by legal authorities in a large number of nations, he was unable to find employment with major criminal organizations. His own self-respect plummeted.

He found employment with Monsieur Khrull, the head of a criminal organization in Indochina, performing the same work for him that an ordinary hired gunman might do. In despair and self-contempt, the Swordsman sank into alcoholism.

It was then that he met Mantis, whom circumstances had forced into working for Khrull as a bar girl. She encouraged the Swordsman to begin a new life. He failed to take her advice until he was seriously wounded on a mission for Khrull. Mantis found him and nursed him back to health, saving his life.

Duquesne and Mantis traveled to New York City, where he told the Avengers what had happened to him and asked for a second chance as a member of the Avengers. The Avengers granted him probationary membership and soon realized that he was indeed both sincere and valuable to the team, and they granted him full membership.

Although the Swordsman served well with the Avengers in their missions, he was wracked with self-doubt and insecurity, especially after a series of failures. Moreover, although the Swordsman was deeply in love with Mantis, she rejected him. Kang the Conqueror discovered that Mantis was the Celestial Madonna for whom he was seeking.

Determined that if he could not have the Celestial Madonna, no one would, Kang aimed an energy weapon at Mantis. The Swordsman rushed forward to protect the woman he loved. Kang’s energy bolt was blocked by the Swordsman’s blade. The energy traveled up the sword into the Swordsman’s body. He died in the arms of Mantis, who finally acknowledged her own love for him.

The Swordsman corpse was later reanimated by the eldest Cotati (a race of tree-like aliens) on Earth, as a vessel for at least a part of his consciousness. The reanimated Swordsman, glowing with a green aura, went to escort Mantis and became the father of the Celestial Madonna’s son.

Although the reanimated body crumbled to dust some years later, a new Swordsman appeared years later – from a parallel Earth’version of the Avengers led by Proctor.

The Swordsman is a fairly large guy with a thin black moustache and a costume of purple pants, a purple tunic w/pink trim, cavalier-style boots, and heavy gloves. His mask is purple with a head-fin and leaves the lower half of his face exposed.

Earlier in his career, Duquesne was extremely selfish and mercenary, more than willing to kill a young Hawkeye in order to prevent capture.

It appears that he was in search of a cause. His membership in the Avengers and his love of Mantis brought out his best traits, aiding him in overcoming his many character flaws and finding his inner nobility.

“I am the Swordsman and this bar is under my protection. Surrender now and I will not be forced to kill you.”

“Amanda Waller, meet the Swordsman. Swordsman, meet Mrs. Waller.” That does seem to be a theme in my DC Universe Histories…maybe I should write up some heroes.

Bonuses and Limitations:
Enhanced Initiative only if he has a sword in hand when rolling Initiative (-1) and is not factored in the Initiative above.

Source of Character: The Avengers. 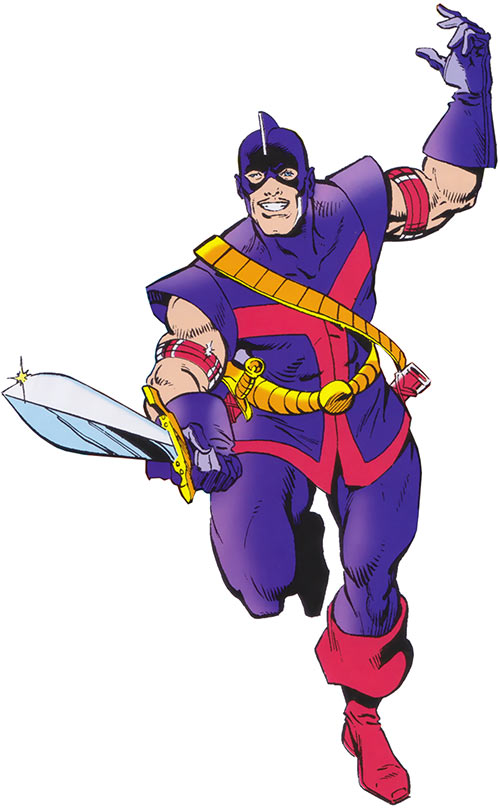