Top Ten was a 1999-2001 series by Alan Moore and Gene Ha. It was successful enough to get a few spin-off limited series – mostly on strength of its quality, and Moore’s name.

It takes place in a strange mega-city where almost everyone has some super-hero-like powers or assets, and the culture comes from living in a comic book world. Most stories follow police detectives working this difficult beat, the titular Top Ten precinct. They use a TV-style police procedural format.

Synaesthesia’s senses are crossed. She perceives sounds as colours, and smells as sound. However, her acuity with those senses is remarkable. Furthermore, she is very good at memorising sensory inputs. This gives her an unique investigative edge.

She is also a skilled police detective. But doesn’t seem to have any combat ability – she always stays clear of any confrontation. When you can call on officers who are invulnerable or have thermonuclear missiles, this is not much of a problem, though.

Nothing is known about Detective Jackson before she joined the NPD at the Top Ten Precinct.

She once dated Smax, but that was a mistake and they broke up several months ago.

Jackson is petite. Which is even more noticeable as many precinct guys such as Smax, Hyperdog or King Peacock are real tall.

Despite her strange senses, Jackson seems to just be a normal, dynamic young woman. She’s pretty cool and easy-going, and smells… sorry, sounds like somebody you’d enjoy hanging out with.

She seems quite experienced as a detective, and has no problems directing teams of officers and coordinating and conducting investigations. She is very confident in her senses. When the unthinkable happens and she recognized Commissioner Ultima’s scent, she did act, although she was obviously shaken. She swears a bit, but no more than most cops.

Syn is apparently the type of young woman who is cute, vivacious and somehow always end up with Mister Wrong while everybody else can tell her she’s making a mistake. She was dumb enough to date Smax, and is attracted to her partner, who happens to be a married devil worshipper with an happy family.

Due to her super-synaesthesia, her speech is sometimes surprising. She’ll refer to what she hears in terms of colours and what she smells in terms of sounds – see the quotes.

“What was that ? Li’s voice was black and yellow.”

“This smell… it’s a bit like Beethoven. Daa da da da daa da da da… which symphony is this, incidentally ?”

Syn Jackson would presumably work at Metropolis’ SCU, and would have been recruited by Maggie Sawyer as investigative support personnel.

Bonuses and Limitations:
Recall is limited to smells, sounds and tastes. 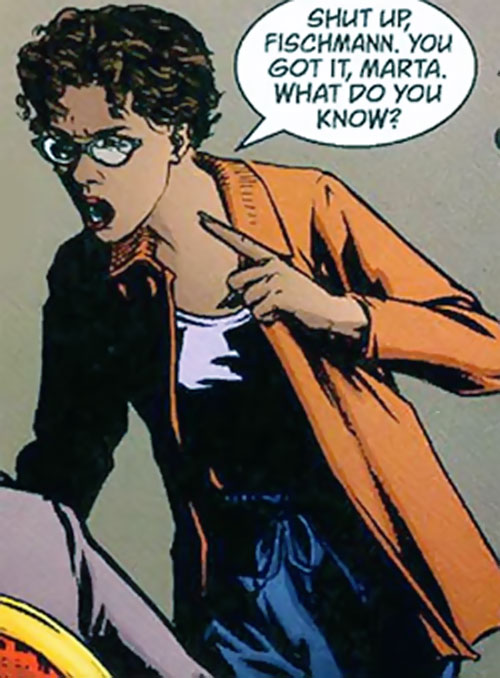