Syndrome is supposedly “not a super” but he demonstrates exceptional ingenuity, technical know-how, planning, and perception far beyond the science of his time.

This has lead some fans to conjecture that he actually is a super and that his power is intelligence.

Syndrome’s real name is Buddy Pine. As a boy, he considered himself to be Mr. Incredible’s greatest fan, top of his fan club. For all of a few minutes he was even his self-appointed ward and sidekick, “Incredi-Boy”.

His idol initially humored Buddy with autographs and similar considerations, but did not approve of a child showing up uninvited to announce that they’re partners to begin with, much less repeatedly.

Although Mr. Incredible eventually resorted to bluntly telling him that he would not tolerate such behavior, the boy was not deterred. Buddy even went as far as to interrupt Mr. Incredible’s impending showdown with the supervillain Bomb Voyage. This put him in danger, forcing Mr. Incredible into a dangerous rescue and allowing Voyage to escape.

Incredi-Boy showed advanced mechanical skill by creating his own rocket-boots. But they weren’t nearly enough to convince Mr. Incredible, whose callous dismissals left Buddy’s fantasies crushed. This blow and his own skewed interpretation of the event drove him to a venomous hatred for his former hero, and then to revenge.

Buddy used his skill with inventions to become a highly successful and wealthy weapons designer/merchant, developing a complete lack of conscience in the process under the name of Syndrome. He never got over the snubbing in his youth, and eventually became a bona fide supervillain, complete with the volcanic Nomanisan Island in the Pacific Ocean for an Evil Lair and a large number of minions.

His primary agent in his dealings with the outside world was a mysterious woman (and his implied lover) known as Mirage.

By the height of his career Syndrome was equipped with a variety of gadgets of his own design that successfully gave him super-like powers. These included:

Syndrome’s other inventions also saw extensive use in his machinations. These include:

There were 10 Omnidroid versions, each version more powerful than the last. He improved his Omnidroids by battle-testing them on unsuspecting supers, ultimately striving to create one that would be invincible to everyone but himself.

Syndrome enacted Operation Kronos as a means to eliminate all supers while portraying himself as a hero. However, he only got as far as saving some of the citizens from being incinerated by a trashed tanker truck and detaching one of the Omnidroid’s arms. 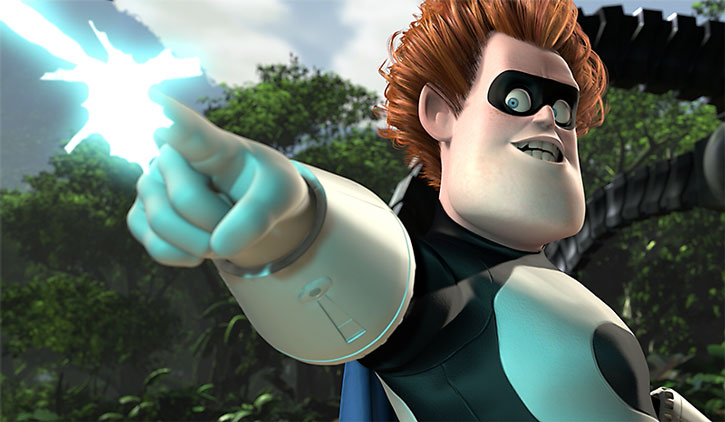 The Omnidroid itself then “learned” that Syndrome controlled it through the remote on his left-hand gauntlet, blasted it off, and shot Syndrome’s left-side aero-boot out of commission, sending him flying into the wall of a highrise building, knocking him unconscious.

Mr. Incredible and his family escaped from one of his multiple-prisoner containment cells and, with the help of Frozone, were able to foil his scheme.

Doubly humiliated, and with his assets frozen by the National Supers Agency, Syndrome retaliated by trying to kidnap Mr. Incredible’s infant son, Jack-Jack. His goal was to raise him as his sidekick. He briefly immobilized the Incredible Family with his zero-point energy field and attempted to fly off with the baby.

The distraught Jack-Jack, however, utilized a succession of previously dormant superpowers as Syndrome transported him to his air vehicle.

Brought out of balance by Jack-Jack’s sudden attack and slamming into his jet, Syndrome dropped Jack-Jack from an altitude of several hundred feet. Mr. Incredible quickly hurled Elastigirl into the air, where she caught Jack-Jack and turned herself into a parachute which brought them safely to the ground. 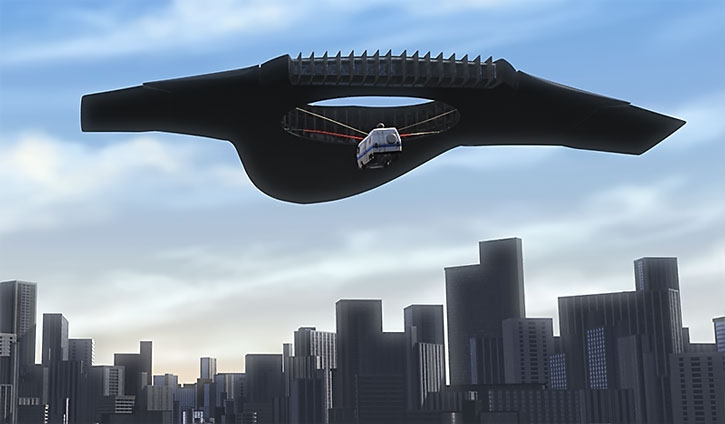 Syndrome returned to his waiting private jet above the Incredible Family’s house. In typical supervillain fashion, he hung from the jet’s side door, vowing revenge and promising to return. Mr. Incredible responded by sacrificing his very expensive car to destroy the cockpit. The impact threw the villain from the plane and his cape was caught in one of the jet’s engines.

Syndrome was sucked into the engine, which then exploded. Part of the plane wreckage then landed on the house, nearly torching the Incredibles alive. They all survived, however, when Violet shielded them with one of her force fields, but were left homeless in the aftermath.

Being sucked into a jet engine implies that Syndrome is dead. However, such incidents have been known to be survivable in the real world. And in any event, it is a supervillain staple that no death is permanent without the body (if then) for proof. Syndrome is undoubtedly still alive and still plotting.

Syndrome is a short, barrel-chested man whose red hair extends straight up in a manner reminiscent of flames, apparently because of the power that flows from his evil mind. He wears a suitably dramatic costume as a villain in plain black-and-white with a large “S” symbol across his chest and a flowing cape.

Syndrome was voiced by Jason Lee.

Syndrome is a refreshingly complex character as a villain. On the surface, he is everything a typical plotting supervillain is supposed to be…Cold, Unfeeling. Vengeful. Overconfident. Trusts his own Intelligence above everything else. Assumes he does not make mistakes. 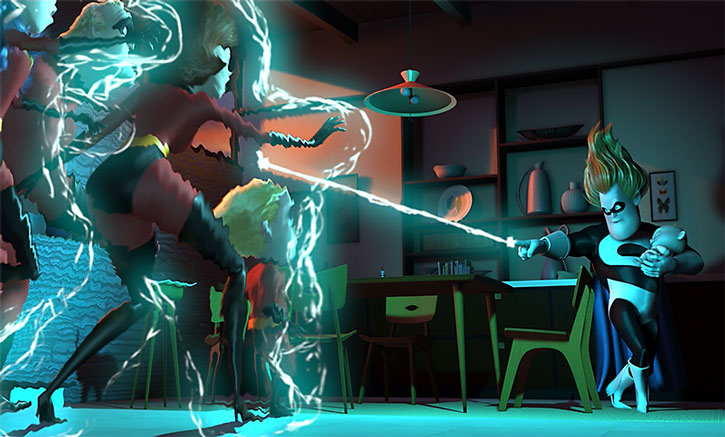 The most fascinating aspects of his character are his crushing self-esteem issues regarding the lack of his own innate powers.

At the age of 10 he designed and built a set of functional rocket boots, and over the next 15 he was responsible for an incredible array of high-tech weapons and devices. But he still feels inferior to the supers, never realizing that his intelligence makes him just as gifted, of not more so, than those he admired.

Syndrome resents other supers, and will do anything to be the center of people’s attention as a Hero – ANYTHING. He has already committed multiple murders to further his plot… It is difficult to imagine anything that he will stop at now.

Syndrome: “It’s bigger. It’s badder. Ladies and gentlemen, it’s too much for Mr. Incredible ! It’s finally ready ! You know, I went through quite a few supers to make it worthy to fight you, but man, it wasn’t good enough ! After you trashed the last one, I had to make some major modifications. Sure, it was difficult, but you are worth it. I mean, after all… I am your biggest fan.”
Mr. Incredible: “Buddy ?”
Syndrome: “My name is not Buddy ! And it’s not Incrediboy, either. That ship has sailed. All I wanted was to help you. I only wanted to help, and what do you say to me ?”
Mr. Incredible: [Flashback] “Fly home, Buddy. I work alone.”
Syndrome: “It tore me apart. But I learned an important lesson. You can’t count on anyone, especially your heroes. ”

[Watching news reports about his Omnidroid]
“Oh, come on ! You gotta admit this is cool ! Just like a movie ! The robot will rise dramatically, do some damage, throngs of screaming people, and just when all seems lost, Syndrome will save the day ! I’ll be a bigger hero than you ever were. ”
Mr. Incredible: “You mean you killed off real heroes so that you could *pretend* to be one ?”
Syndrome: “Oh, I’m real all right. Real enough to defeat you ! And I did it without your precious gifts. Your oh-so-special powers. I’ll give them heroics. I’ll give them the most spectacular heroics the world has ever seen ! And when I’m old and I’ve had my fun, I’ll sell my inventions so that *everyone* can have powers. *Everyone* can be Super ! And when everyone’s Super… no one will be. ”

[The Incredibles enter their house to find Syndrome holding Jack-Jack. Syndrome paralyses them with his immbobi-ray before they can make another move]
Syndrome: “Shhh. The baby’s sleeping.”
[Syndrome gets up with Jack-Jack still in his arms, preparing to leave]
Syndrome: “You took away my future. I’m simply returning the favor. Oh, don’t worry. I’ll be a good mentor: supportive, encouraging. Everything you *weren’t*. And in time, who knows ? He might make a good sidekick.”

The “Public backlash against supers” motif belongs more in a Marvel setting than DC, but the overall feel of the book is more Silver Age  than modern, so placing them in the Post-WWII era is probably the right thing to do. In which case, Mr Incredible and Elastigirl were supers during the final years of the McCarthy trials, and were the first to re-emerge in the new Heroic Age as the Incredibles.

In this scenario, Syndrome can be used as-is.

A 1472 Point Character (does not include Gadget fee for the Omni-droids, since they are covered by a separate writeup)

Note that the above-listed equipment is what Sydrome will typically be carrying at any given time. However, he has designed and built many other devices such as the monopod system on Nomanisan Island, the Manta-ray jet which can fly or act as a submarine, the velocipods, and others. The Omni-droids in particular show that Syndrome is thorough in his research and rarely underestimates a target.

Given the chance to do so, Syndrome will undoubtedly research a foe (making use of his Scholar Advantage) and, when facing an opponent with sufficient warning, have devices tailor-made to his or her powers or any known weaknesses. 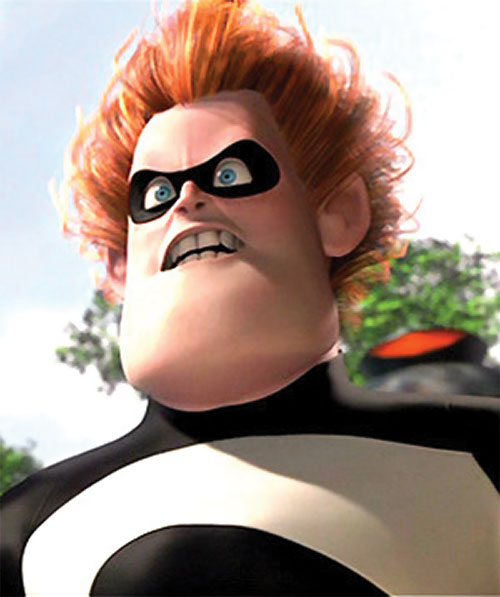 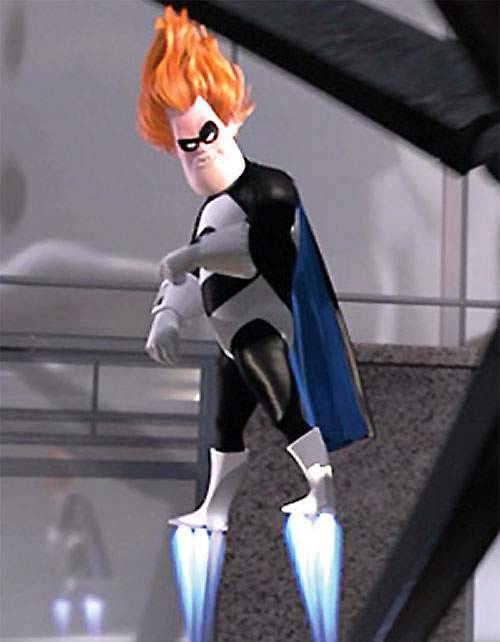 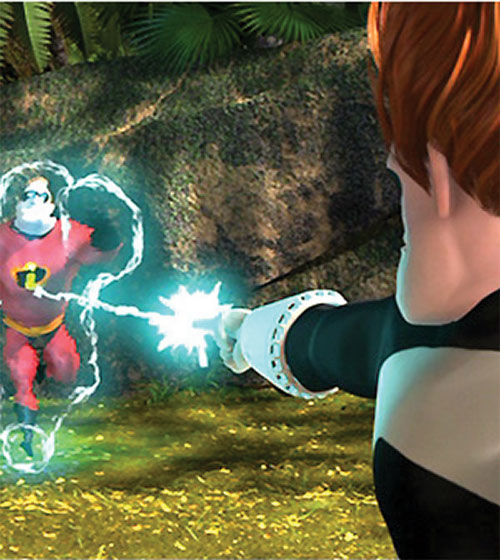 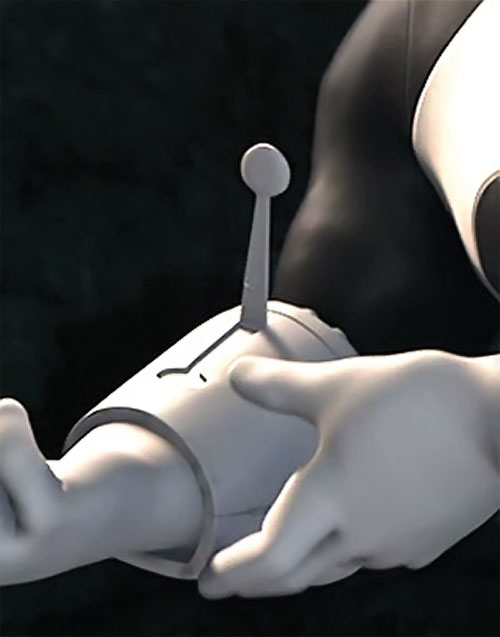 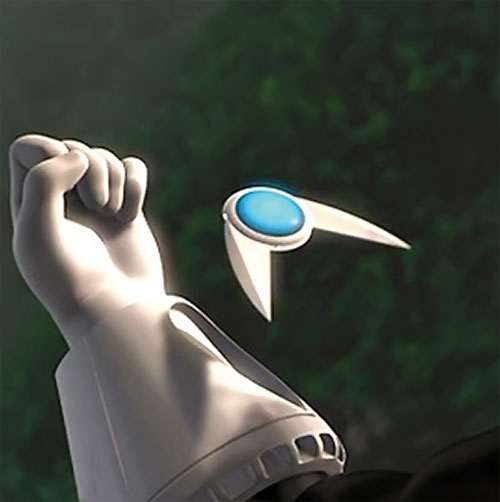 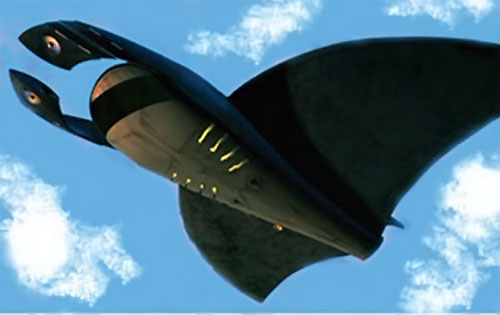 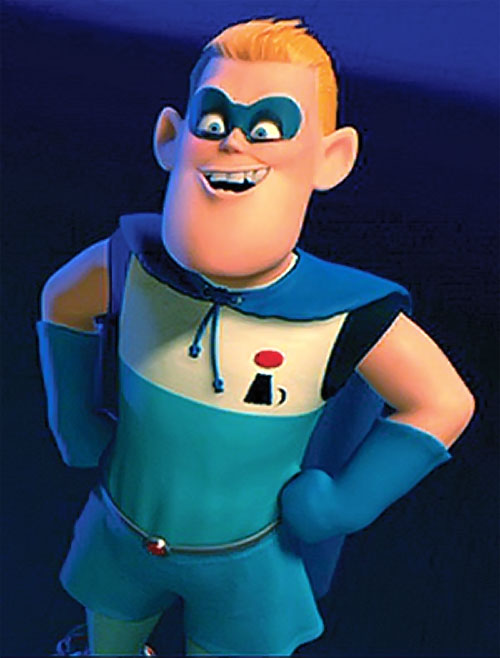 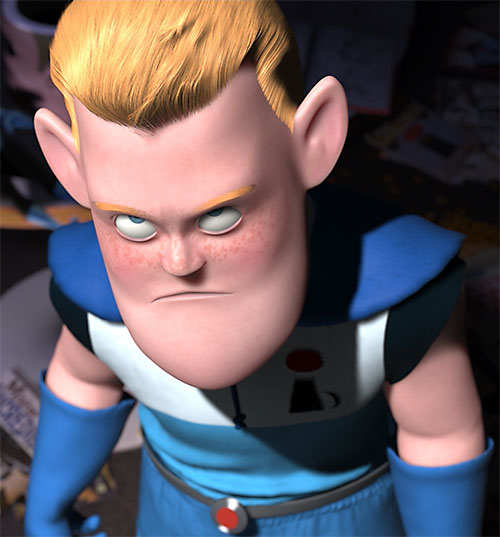