Unlike her superpowered siblings, Synergy inherited all of her father’s (the deceased hero, Captain Dynamo) superhuman abilities. Therefore, she is potentially the most dangerous of all of the good Captain’s offspring.

Fortunately for the Dynamo Five, and even though Synergy has had her powers since near birth, she has not achieved genuine mastery over her individual ability. This may be due to the fact that she tends to rely on her great strength and resilience to injury instead of her “lesser” powers.

This puts her at a disadvantage against her siblings, who seriously trained with their one power.

Synergy is strong enough to literally juggle midsized sedans, rend solid steel with her bare hands and shrug off automatic weapons fire with ease. Her gift of unaided flight allows her to rocket through the air, her upper limits being unrevealed.

Cynthia’s story really began when Captain Dynamo first encountered his nemesis Chrysalis. Chrysalis was a criminal genius who used her great intellect to create technology that allowed her to take nearly anything she wanted. She made a career out of robbing banks and being thwarted by Captain Dynamo. 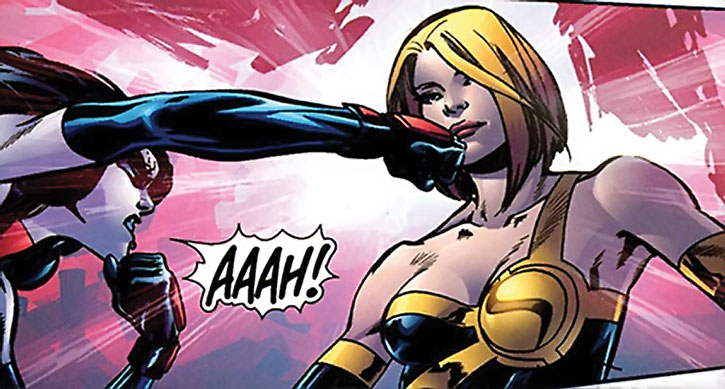 The two rivals became entangled in a secret romance. Unlike his many other infidelities, his affair with Chrysalis truly meant something to Dynamo. Thus, it was with some reluctance that he began to split his time between the life he led with his wife Maddie and his mistress. Eventually their affair produced a single child, whom they named Cynthia.

Dynamo was overjoyed with the birth of his daughter. For the first time was able to be a real part of one of his children’s life. While Dynamo had at least five other children, the mothers had no idea of his true identity due to his chameleon powers.

The Captain of her heart

Dynamo was happy and eager to share his life with Cynthia. He went so far as to expose her as a toddler to the radiation that granted him his awesome powers. The two shared a lot of joy before his untimely death. 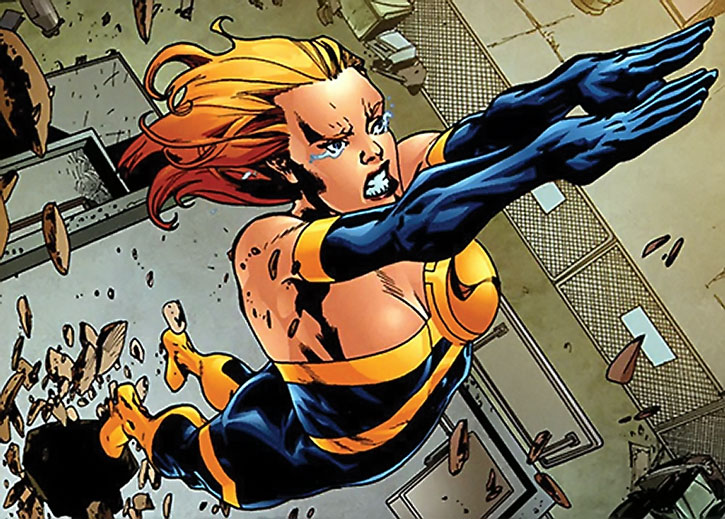 Chrysalis was heartbroken by Dynamo’s death. Over time, she grew jealous that Maddie was the only one recognized as Dynamo’s widow. Eventually, she hatched an insane plan to use her daughter Cynthia as the weapon of her vengeance on Maddie Warner.

Soon thereafter Cynthia used her shapeshifting ability to disguise herself as her dead father. She began showing up all over Tower City, saving lives and fighting crime. Her actions drew the attention of Maddie Warner and the Dynamo Five.

When she eventually came face to face with Maddie, “Dynamo” talked her into going someplace more private where they could talk. Despite her reservations and disbelief at her husband’s return, Maddie couldn’t help herself. Thus, she allowed Cynthia to fly her to an undisclosed location.

When they arrived, Maddie was confronted by Chrysalis and Cynthia dropped her deception. The two women gloated and taunted Warner with the details of Cynthia’s (now christened Synergy) birth and Dynamo’s infidelity. Chrysalis even went so far as to tell Maddie that Dynamo was going to leave her.

Instead of crumbling in misery, Maddie could only laugh. She realized that the two women before her had no idea how disloyal Dynamo had been in life. She told them that Dynamo had been unfaithful to both of them at least five times. Chrysalis became absolutely enraged. She ordered Cynthia, now Synergy, to murder Maddie. Equally upset, Synergy moved to comply. 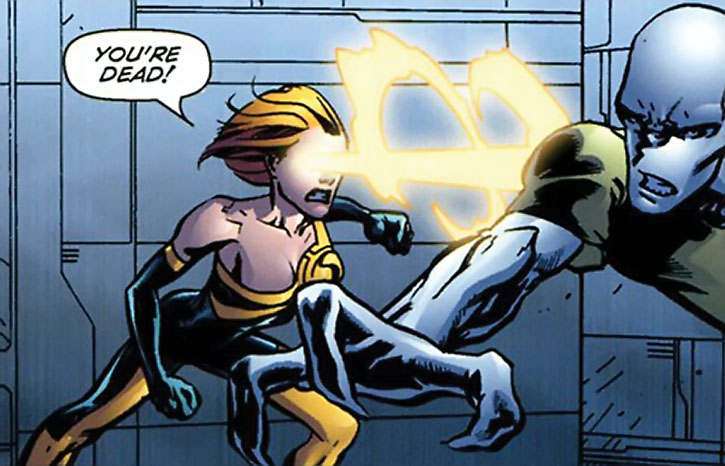 Fortunately for Maddie, her disbelief and mistrust bore fruit. Before Synergy could kill her, Maddie injected herself with the failsafe that she brought with her. It was a single vial of the Whiptail serum. In seconds, Maddie transformed into the monstrous creature named Whiptail and attacked Synergy.

Their battle raged across Tower City, and drew the attention of the Dynamo Five. The Dynamo Five subdued Maddie, and then engaged both Chrsyalis (who had retrieved her armored battle suit) and Synergy.

The battle was brutal but short. The much better trained Dynamo Five subdued the villains. When Maddie recovered, she felt that despite Synergy’s upbringing she was not truly evil. Beside, no prison that they put her in would hold her for long. She convinced Scatterbrain to wipe Synergy’s memories. 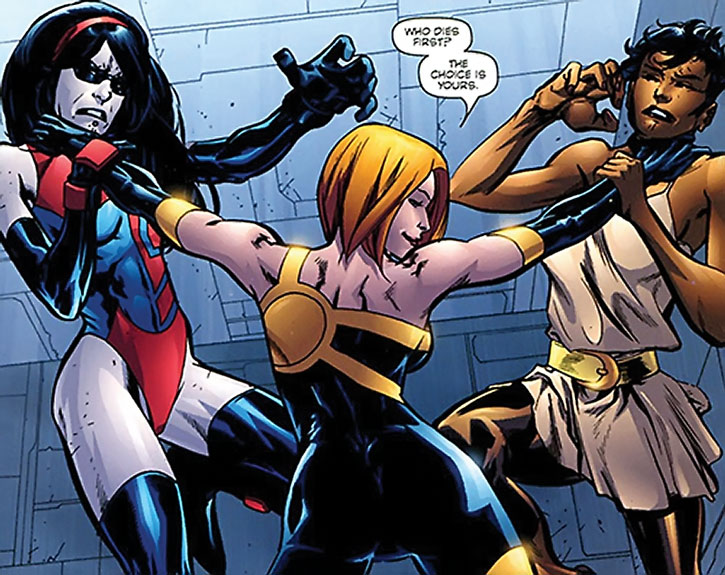 Despite his reservations, Scatterbrain complied. He left Synergy with complete amnesia. Synergy was then deposited at a church orphanage, presumably to live out a normal life. Meanwhile Chrysalis was incarcerated in the Tower City prison system.

Unfortunately for the Dynamo’s, the best laid plans often go astray. While at the orphanage, Cynthia encountered a priest named Gideon. He knew all about her past life. Gideon nursed Cynthia back to health, all the while nurturing her resentment of the Dynamo Five.

Cynthia resisted at first until Gideon, in a bold move, shot her in the face with a handgun. The sudden scare, and resulting revelation of her invulnerability restored her memories with a vengeance. 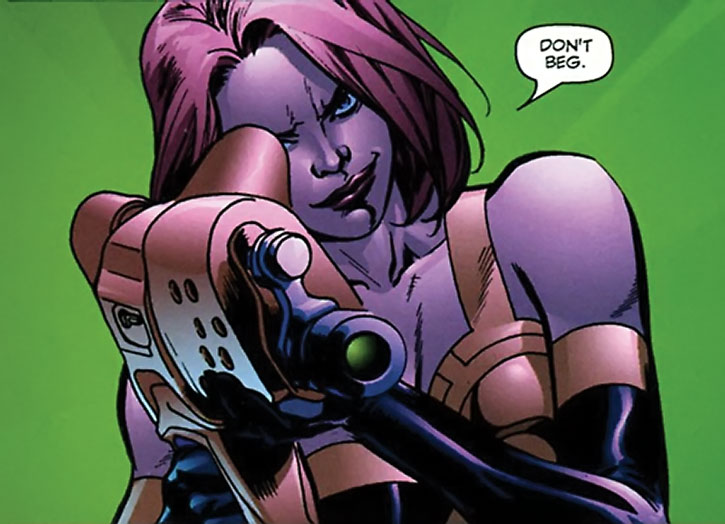 The two concocted a plan to first take vengeance on the Dynamo Five. They also wanted to free Chrysalis from her imprisonment. Using her shapeshifting abilities, Synergy stole a prototype weapon from F.L.A.G.. It projected the same radiation that gave the Dynamo’s their powers in the first place.

Then disguised as Maddie, she waited until their guard was lowered and attacked them one by one. When bathed with the radiation, her siblings found themselves unable to resist her strength. Soon the entire team (including Maddie) found themselves bound and helpless in an abandoned scrap yard. There Gideon awaited.

Gideon revealed that he was Maddie’s abandoned son from a previous marriage. Meanwhile, the five Dynamo siblings hatched a desperate plan to escape. After overwhelming Synergy with horrible thoughts, they managed to get hold of the radiation gun and re-empower themselves.

A explosive battle broke out. It ended when the Dynamos planted the seed of doubt in Synergy’s head. They made her suspect that Gideon was only using her and had no intention of helping her free her mother.

As a result, Synergy broke away from the fight long enough to read Gideon’s mind. When she saw his true intentions, she struck him once, rendering him senseless. She then rocketed skywards in despair.

As it stands, she hasn’t been seen since this incident. But with her shapeshifting powers she could literally be anyone.

Cynthia is a shapely young woman with a typical comic book heroine figure. Her red hair hangs in a fashionable bob, with the front longer than the back. It generally hides the right side of her face from view.

Her costume is a one piece leotard , with blue wings connecting her sleeves of her arms to the thighs of her legs. It is a blue and red number, with a low plunging neckline, generously exposing her ample cleavage, and has a blue domino mask to hide her face.

Synergy is a very angry young woman. In a short period of time, she found out that:

As a result, she has very little mercy or pity in her heart. She has no issues using civilians as pawns when she’s fighting and no respect at all for the property that surrounds her. Though she’s not that creative when it comes to using her powers, she has become adept at using her basic powers for combat or deception.

One of her favourite tactics is to assume the form of someone that her victim trusts just long enough to get close to them. Then to reveal her true face while assaulting them.

Out of all of her siblings, Synergy is the most fixated on Scrap. Perhaps it’s because they are both girls, perhaps it’s because Scrap is so confident and obviously cared for by the others, one can’t be sure. In either case, Synergy truly hates her and given the opportunity would most likely kill her without pause.

“You know, I think I hate YOU the most. I can’t decide if I want to kill you first or last.”

“I could kill you any number of ways. I’m leaning towards ‘painful’.”

“She only delayed the inevitable. You’re all dead. I promised Gideon I’d kill you, and then we’re going to free my mother.”

“Just you and me. No stupid siblings to interfere. I’ll even make it a fair fight. I’ll ONLY use my superstrength.”

(Reverting to her true face once Scrap has figured out her identity) “To be honest, I’m glad it’s come to this.”

“Who dies first ? The choice is yours.”

Scrap: “Look, we don’t have to do this. We don’t have to be enemies. We’re related. We’re family, right ?”
Synergy: “Save your breath. My only family is my mother, and she’s in prison thanks to you all.”

Myriad: “He’s your brother too, y’know. We’re all related.”
Synergy: “Then I guess that makes me the black sheep of the family.”

The Dynamo five can be dropped wholesale into the DC universe as is. Tower City can be yet another fictional city within the DC USA.

More interestingly though, each of the siblings could have been the illegitimate offspring of a certain Martian in a less cordial campaign. 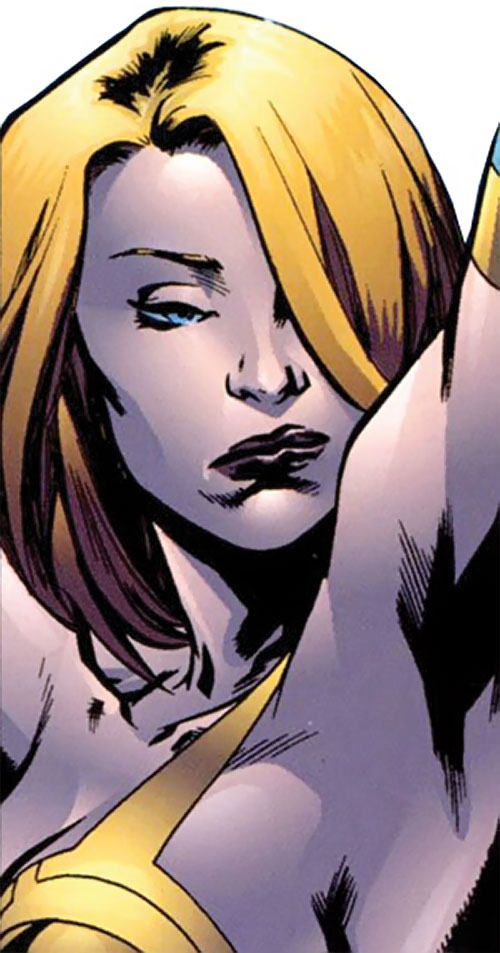 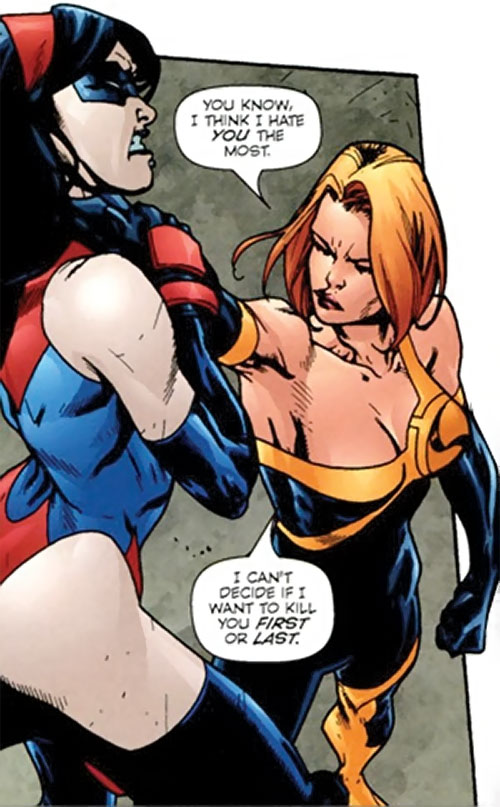 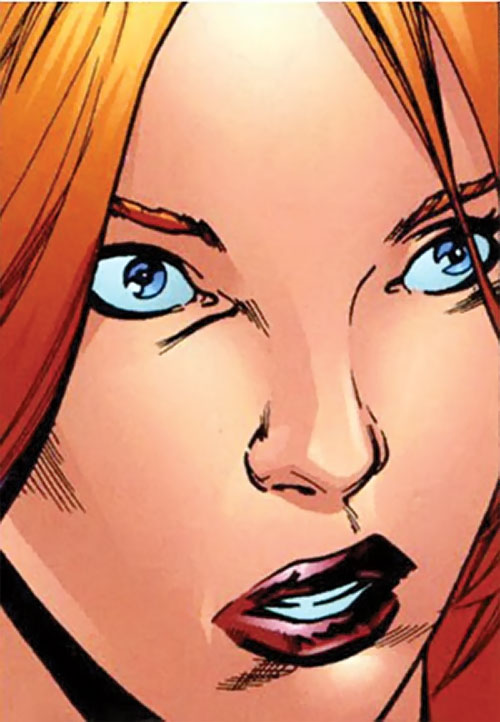 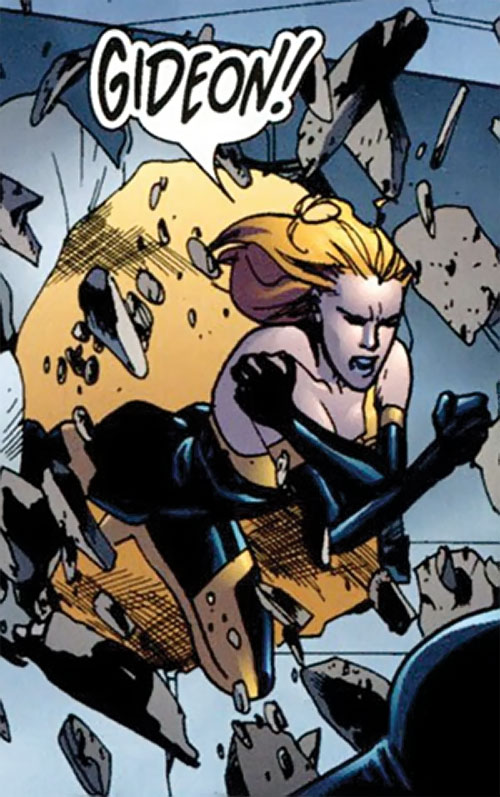