Synth possesses superhuman strength, and is secretly a shapechanger. He seemed to be an experienced criminal, and there’s a possibility that he was trained in industrial espionage.

He was also designed to be super-intelligent. But that did not quite work out, since like the other Vatmen he turned out to be unstable. Synth is thus a genius… every other day. At midnight on the dot, he becomes a drooling imbecile with a very limited awareness of his environment – for precisely 24 hours.

It was mentioned that during his “high” days Synth did things such as composing operas in Esperanto. This implies that he masters a much longer list of know-hows than what was demonstrated. GMs should feel free to add Skills (at about 06 APs), Familiarities, Languages, etc. as needed or interesting.

Synth was once a part of a now-forgotten team of corporate super-heroes, the Vatmen. One assumes that they were artificial beings grown using an experimental process. In the medium run, the Vatmen project was a failure. They all died or went crazy due to their inherent instability. It is possible that Synth was the most viable of the batch.

The power-hungry Synth became a criminal. But since he was mentally crippled every other day, he couldn’t satisfy his ambitions. Nevertheless, he became an enforcer for the mob controlling a very bad place – the city of Vanity, in Oregon.

This mob, apparently led by Mister B. and Mister F., was not named in the story. Synth did not mention his shape-shifting abilities to them, hoping to one day use them to somehow become capo.

In unrevealed circumstances, Synth met with 17-year-old business student Mindy Falconer. They fell in love. The venomous, ambitious lovers decided to take over Vanity’s underworld. Falconer would run the business during Synth’s off-days.

An opportunity arose when Mister B. requested that Synth cook up a plan to get rid of Bloodtype, Vanity’s killer vigilante. Synth needed a way to lure Bloodtype to a crime scene. Falconer had him use her father — a retired, has-been villain called the Piper — as the bait.

The plan worked fine. Synth “kidnapped” Mindy Falconer. Using this “hostage”, the mob forced the Piper to put his costume back on and rob a bank. Bloodtype did intervene during the bank heist, as planned. A hidden bomb was detonated, killing Bloodtype, the Piper and a number of customers.

Synth then started impersonating Major Force. He pretended to have come to Vanity to take over now that Bloodtype was out of the picture. He killed and beat up several criminals to make his point, and the mobs — with Synth their only superhuman — couldn’t hit back.

”Major Force” then proposed a meeting to negotiate turfs, to which the mobsters agreed if only to gain time.

The meeting was a trap. Falconer (still supposedly a hostage) and “Major Force” confronted the mobsters, and Synth revealed the “Major Force” deception. They smugly announced their plans and prepared to gun down the mobsters. Synth had gathered enough inside intelligence over the years to resume mob operations in Vanity without an hitch.

Two heroes then intervened. One was a newcomer that would soon become known as Aztek. The other was Green Lantern (Kyle Rayner) who was following up on reports of Major Force sightings. This derailed the take-over attempt, and the mobsters present were arrested.

The confrontation had to take place late in the evening, and the heroic intervention made the events last longer than they should. As Synth prepared to shoot Aztek, midnight struck. Immediately befuddled by his cyclical idiocy, Synth accidentally shot Mindy Falconer dead.

Synth has not been seen since. Given his nature, it is possible that he has long since reached the end of his lifespan.

Synth is a made man, straight from a Godfather movie. He thirsts for power – perhaps because he resents being forever held back from exercising his brilliance by his condition.

He’s a ruthless killer, and will not hesitate to kill some schmuck(s) in an horrible way if he needs to intimidate others.

When Synth is in his confused state, he can’t even really speak and remains passive. He was unable to even recognize his lover. When he’s in his brilliant state, he’s smooth, tricky and arrogant.

“Did I neglect to mention they nicknamed Synth because I’m a shape-shifter ? The Major Force look was only a disguise, you morons. Just my way of pulling a job and laying the blame on some other clown.”

(Disguised as Aztek, and trying to convince Green Lantern to kill the actual Aztek) “Oh no. He’s coming for me. Don’t be confused by his appearance – Synth can assume any form he touches. Terminate him now – while you can.”

Bonuses and Limitations:
Superspeed only to accelerate mental Tasks. 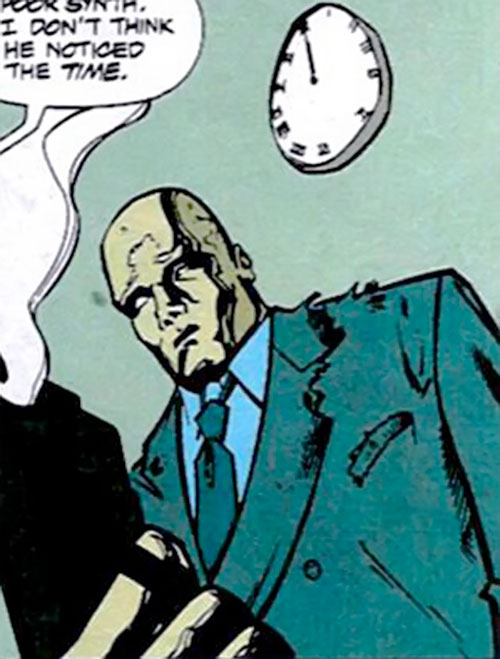