Syonide was a one-shot villain who appeared very early in Wonder Woman’s career, back when it was written by her creator Charles Moulton. He’s a literal axe murderer, albeit in a comedy context.

As with many old Wonder Woman stories it was goofy and naïve, but perhaps somebody will have an angle to bring him back.

Syonide is not related (as far as we can tell) to two other DC Comics villains of the same name (the 1978 version and the 1985+ version).

Syonide is a diminutive nutbar. He lives in his own world and makes little sense.

However he’s good at sneaking around, and he’s amazingly strong. Some of the art depicts him with a highly developed physique (especially by 1940s standards), and he could hack through a wall with a fire axe in record time. What the wall was made of isn’t clear, so his strength could be even higher than in our game stats.

He could also knock out Wonder Woman by bushwhacking her (which requires high but not quite superhuman strength), and break a gas pipe by throwing his axe (through the pipe was probably weak from age).

Syonide only fights if he has his axe. If it’s taken from him he likely will be too crestfallen to resist arrest.

Syonide was an homicidal maniac imprisoned at the “Tomb Home”, the nickname of an asylum. He stole a book of matches from a guard and though the fire was soon contained, it allowed Syonide to steal a fire axe, hack through a wall under cover of the smoke and make a run for it.

In a public park, he ran into General Darnell and his aide Diana Prince. Thinking in his delirium that he was John Smith and she was his daughter Pocahontas , Syonide attacked Darnell. Diana Prince, aka Wonder Woman, threw him away but the weak-kneed Darnell opted not to pursue.

Hours later, Syonide stumbled upon an abandoned house in the woods – right where Etta Candy was throwing a “maniac party”. Pilfering leftover costumes, Syonide made himself a sort of caveman look (??). Since the point of the costume party was to act loony, nobody noticed.

Syonide bushwhacked Wonder Woman, then captured most other guests and tied everybody in the basement. He decided to let a gas leak kill everybody in combination with a damaged heater, but of course Wonder Woman freed herself, rescued everyone and stopped Syonide with Steve Trevor’s help.

The homicidal maniac was imprisoned again, never to return… so far.

Syonide is a cartoon madman, who thinks that he’s Pocahontas’ father and is hunting for John Smith with an axe. Pretty, young women often are Pocanhontas to his eyes ; older, White men often are John Smith. Syonide generally hates “palefaces” and wants to scalp them.

His delirium isn’t based on *any* knowledge about the actual Pocahontas, native Americans, Virginian history or the universe in general.

He speaks in a made-up broken English, and everything he mentions comes at best from a racist Z-grade 1940s comic strip about “savages”.

For instance he thought that a leopard print over-the-shoulder jungle tunic was passable “Indian” garb. And of course, he always refers to himself as Chief Powhatan and is obsessed with scalping people.

He generally comes across as a weird, agitated, cartoonish goblin with an axe, though the style of the stories make it obvious he’ll not actually get to kill anybody.

“Me must find war paint ! Then find Whites who carry off my daughter Pocahontas !”

Bonuses and Limitations:
Shrinking is Always On, Form Function and Already Factored In.

Drawbacks:
MIA toward Pyromania, SIA toward giving up and sulking if somebody takes his axe away, CIA toward pretending that he’s a deranged, cartoonish version of Chief Powhatan.

All the Wonder Woman encyclopaedias 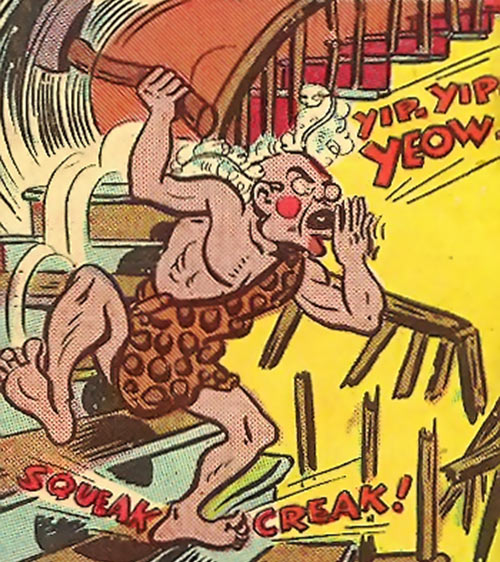