The T-1000 is the latest and improved Terminator model, created by Skynet itself. This android type is composed of liquid metal, resembling quicksilver, which enables it to fully control its body’s molecular and anatomical structure. It has none of the physical weaknesses of the previous models and is, in most physical aspects, superior to them.

Its liquid nature gives it a number of useful abilities :

Actually, the control it has over its anatomical structure is superb although limited by its imagination (which it is lacking ; additionally it couldn’t turn into complex structures that would require chemicals and such). This combination of abilities makes it virtually impossible to stop, since it can regain physical form again, even after having been blown into small pieces.

This powerful healing ability makes it far superior to the previous T-800, which didn’t heal at all, and had to be repaired manually.

The interior workings of the android are unknown and its life span cannot be easily estimated. The “brain”, as is the case with the T-800, is composed an ultra advanced new processor with an built-in learning processor and appears to have a very large memory capacity. The learning processor enables it to gather new skills through experience (including human interaction).

The processor is able to sort and process information at superhuman speeds and it is unable to calculate wrong.

The programming of all Terminator models is very extensive, which makes it lethal (the programmer has been a real genius). It has full programs for handling visual data and audial information including image enhancing and digital recording (anything seen or heard can be replayed perfectly at any time).

It has complete programs for recognizing weapons and immediately using them to the degree of a master (having tracking/locking systems integrated) and it has expertise in handling any type of vehicle. The T-1000’s processor has been ’liquidized‘ and cannot be destroyed or reached by conventional weaponry.

Additionally, the T-1000, like previous models, is very skilled in certain military skills such as demolition, hand-to-hand combat etc. To be more effective in killing humans it has detailed maps over the human anatomy and general Terminator anatomy. The T-1000 has no programs for making electrical work or repairs since it is beyond the need of those skills. 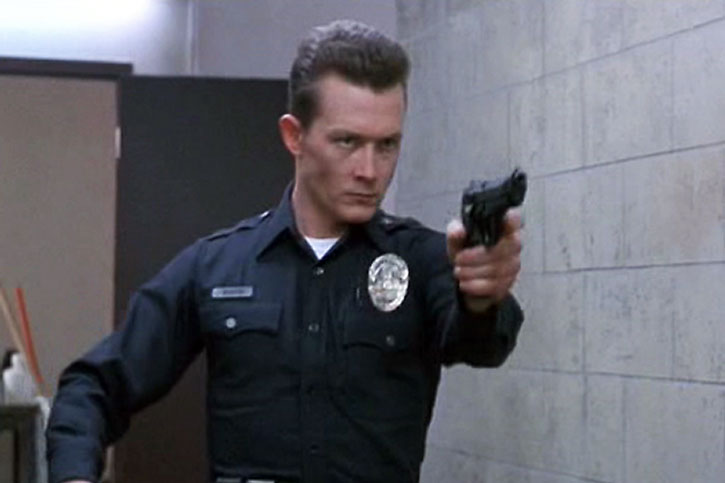 The T-1000 presumably has an built-in radio receiver and transmitter enabling it to communicate over long distances with other terminators or an existing home base.

The T-1000 has upgraded person interaction skills, and thus can very easily pass on as a human being, while assuming any identity that might be useful in tracking its prey. Its logic circuits used for target tracking/spotting are also improved over the T-800 model.

Recapitulating: In a near future a sentient military computer named Skynet will become self-aware, and when the terrified scientists try to turn it down, it protects itself by starting the third world war by attacking the Russians. Russia retaliates with nuclear weapons and soon the world is in turmoil and hell.

The T-800 model Terminators are the main combat troops of the future Skynet computer. Skynet uses these to combat the remaining humans to finally exterminate them and eliminate them as a threat to its existence.

In this future era the human rebels will have a great leader named John Connor. Connor is really humanity’s last hope and this is realized by Skynet. In a desperate attempt Skynet uses newfound time traveling technology to send back a Terminator model T-800 to kill Connor’s mother Sarah Connor before John is even born, thus making certain that the future humans will be easily eliminated.

John Connor manages to sent a soldier to warn Sarah of the coming threat. That soldier later fathers Sarah’s son John Connor, and thus John sent his own father back in time to meet his mother. Sarah Connor miraculously survived the attack and even succeeded in destroying the T-800 (Terminator I).

Some time after this Skynet attempts the same plan again, but this time attacks Connor himself at the age of ten. A new prototype of a terminator machine created by Skynet, the T-1000, is sent back in time to eliminate John. The T-1000 is composed of liquid metal, and possesses not only the full combat package of the terminators, but also is capable of changing its’ form and shape, regenerate lethal damage and much more.

The future John Connor manages again to sent back a protector. This time it is a re-programmed T-800 model Terminator is sent back in time. A lethal hunt with T-1000, composed of liquid metal, trying to kill John, who was protected by the metallic T-800 started.

The protecting T-800 and the T-1000 almost immediately clashed along John, and the T-1000 proved physically superior to the T-800. The T-1000 had the ability to mimic the appearance of humans to better pass among them, and he would have killed Sarah and taken her place to get at John. 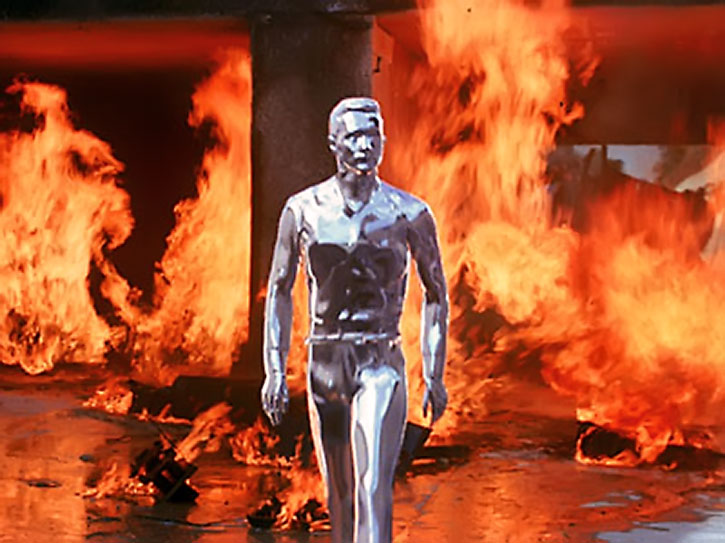 After having emptied one of Sarah’s weapons storages, Sarah went on alone to kill Dyson, the man who had been responsible for creating the processor and computer that would destroy humanity. Sarah was unable to force herself to kill the still innocent Dyson after which John and T-800 arrived.

Dyson, having been told his part in the future history, agreed to stop his work and to help them destroy the notes on the processor and the remains of the first Terminator (which the company secretly had kept). The plan succeeded although Dyson was killed in the process.

Later, the T-1000 found Sarah, John and T-800, and would kill them all. Despite the fact that the T-1000 was basically unstoppable by any means, the then nearly destroyed T-800 managed to kill it by throwing it into molten metal. Not risking that his own neural processor would fall into the wrong hands, and thus bring Skynet and the Judgement Day for sure, the T-800 destroyed itself in the same metal bath.

Sarah and John Connor would survive the hope that Judgement Day would not come to pass (Terminator II).

The T-1000 prototype had a basic anatomical configuration of a slenderly built male in his 30s with stubbed brown hair. This configuration used the guise of being a police officer and thus had access to much information. Occasionally, when need be, it took new guises, killing the original, to put it in a position that could advance it towards its final goal.

The T-1000 moves in an extremely straight-forward and aggressive manner appearing very vicious in combat situations. Any recorded identity could be reused if need be.

In its’ most primitive configuration it was a shining humanoid-shaped liquid metal, resembling mercury, being capable of hardening to above human density or float away like a liquid. It generally used all identities for a while before changing to something more appropriate.

The T-1000 model Terminator has very little own personality. Although it is doubtful that it has any true understanding of human feelings, it has personality enough to pass as a normal human with no difficulty. The T-800 model has two processor settings, but it is very uncertain whether this was implemented into the T-1000 model.

For one thing, it would be a hard task to manually switch such a processor switch, and secondly, the T-1000 has shown no real ability to learn from its’ mistakes (which makes one to believe that it might be lacking one of the processor functions, see Generic T-800 write-up for the details).

If this hypothesis holds true, the following might be concluded : it doesn’t learn from experience, cannot interact well with humans and cannot change/override its’ programming.

This doesn’t seem to entirely be the case, however, since it very slowly learns from experience (slower than the T-800), it interacts well with humans, it can even begin gloating if feeling safe, but it cannot change its’ programming. This means that it has integrated both logic functions of the T-800 into a new processor setting into the T-1000 model.

In game terms this means that it can use Mystical Attributes like humans, it can gain experience very slowly (perhaps gaining lesser amounts of HPs), it can spend and receive HPs (also perhaps with a penalty) and it can gloat, but not be affected by human pleas. Lastly, it can never, ever override its’ programming (thus no overcoming Irrational Attraction rolls are made).

The programming thus permanently gives it the Motivation of Programmed Nihilist with complete and utter following of any programmed order. The T-1000 will only concern itself with fulfilling its’ mission and will immediately kill any hindering or threatening opponent, including other terminators.

The T-1000 was the prototype of a new series of Terminators created by Skynet. If using the Hex-idea implemented in the ’The T-800‘ and the ’Generic T-800‘ write-ups, then the T-1000 would be Borsten’s last, desperate attempt at killing Sarah Connor and/or Jonah Hex.

Borsten could have gotten the idea for the T-1000 from making further studies of old remains of Metallo (who possessed shape-changing abilities) or making it more complex, he might have gained the technology from characters such as the Time Lord (who stole Brainiac 5’s design for the improved Computo that never got built)…

Connections:
None (would have Skynet (Low) in the future). 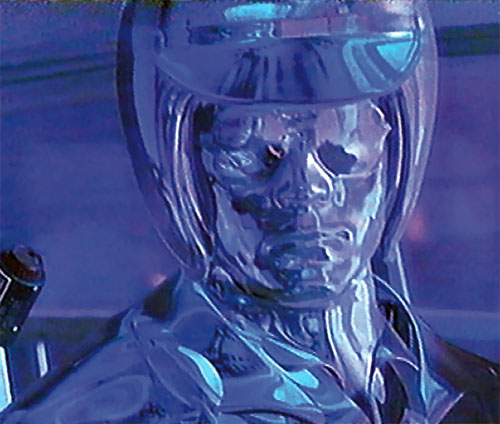 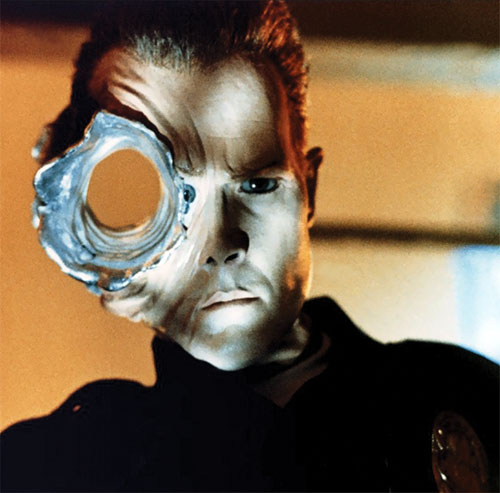 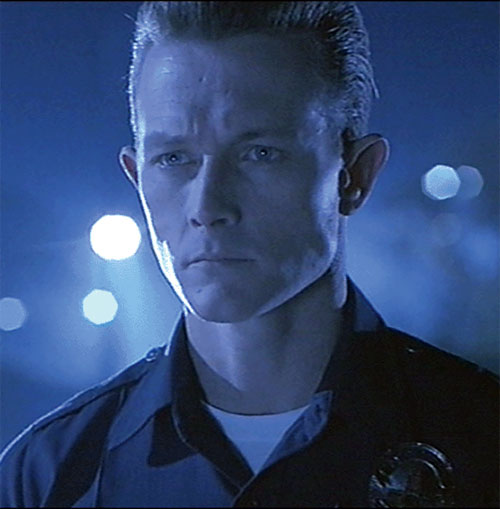