T-Bird is a member of the Exiles, Marvel Comics’ transdimensional  heroes. On his home version of Earth, he did not die during an early mission of the all-new, all-different X-Men.

This is an old profile that was done early in the series’ run (around issue #16, though the biography was later extended). Still, it has S P O I L E R S.

T-Bird has been rebuild by Apocalypse has the most powerful known version of War of the Four Horsemen. He’s a formidable fighting machine with slightly enhanced senses and enough strength to go against the most powerful bricks . He becomes more and more inhuman looking as his anger rises, and may not retain control every time.

T-Bird once defeated an alternate version of the Savage Hulk. But he was quick to point out this version of the Hulk was not as powerful since it didn’t incorporate Banner.

While John’s body is cybernetic, his powers never presented any specifically robotic aspect.

Like on Earth-616 , John Proudstar was recruited by Charles Xavier and became a member of the all-new, all-different X-Men. However, he didn’t die during the battle at Norad. He lived until at least one confrontation with Apocalypse, and was captured by him.

Proudstar was then enhanced, reformed, remade. Howbeit, his indomitable spirit allowed him to tear free from Apocalypse’s machines. But he had already been turned into a formidable cyborg.

He then returned to the X-Men. However, something apparently went wrong with a part of the timestream. Information started to propagate – that would erase some anomalies but also some timelines. Thus, in T-Bird’s timeline, he would retroactively never have torn free from Apocalypse. He would have remained War, one of the Horsemen of Apocalypse, forever.

T-Bird thus joined a small group of youths from threatened timelines. It had been assembled by a halfling-like being called the Time Broker, who explained them the above difficulties. The Time Broker could send them to alternate timelines to rectify anomalies. That would make sure that the timeline corrections never had a reason to start.

The youths agreed, and started dimension-hopping as the EXiles. They accomplished sometimes cryptic missions on numerous alternate Earths.

At one point, John Proudstar even met himself. Or rather a version of himself who had found peace and succeeded Michael Twoyoungmen as Shaman. They had long discussion, and Shaman brought T-Bird some answers and some peace.

During this stay, Nocturne (who had been the lover of the James Proudstar of her own reality) and T-Bird fell in love. Although T-Bird was quite unsure and once drove her away, Nocturne eventually became pregnant.

Later, during an especially harsh adventure, the EXiles and an army of newly freed metahuman gladiators had to drive a fully-powered Galactus away. T-Bird opposed Nocturne’s presence on the battlefield. At that point that had no choice but to reveal their previously secret relationship and Nocturne’s pregnancy.

Soon, hundreds of super-powerful warriors charged. The fight was not going their way, but the assembled Earth force had at their disposal an anti-matter bomb.

This reality’s Hulk was meant to punch it into Galactus, but was knocked too far back. And his back-up, the Thing, ended up too far to plant the bomb. Fully knowing he would probably die, T-Bird grasped the bomb and punched it into Galactus.

The explosion left him into a coma, possibly brain-dead. Shortly after victory, however, the EXiles, including a devastated Nocturne trying to grasp at John’s body, were teleported to another reality for another mission.

John’s “tattoos” and “costume” are actually a layer of artificial body armor. He can retract them for repairs, revealing what may be a fully cybernetised body.

But in reality, he is a man torn. He’s on a quest for the reason why he exist. The reason eludes him, and what Apocalypse did to him isn’t helping at all.

While T-Bird was raised in testosterone central. He, his brother and his father were into macho stuff involving violence, cars, drinking, hunting, etc.. Yet he has a surprisingly sensitive side – which he dislikes to make perceptible, except for close friends.

John enjoys the simple sensations nature can still give him, especially flowers and being underwater. He’ll actually spend hours just enjoying those. He dreams that he’s just a powerful young Apache at peace, able to live an ordinary life in both nature and the city.

T-Bird deeply resent having been turned into a killing machine and warbeast. He considers himself a monster. He was very surprised that Nocturne would love him for what he is. However he was so terrified of what would happen if he were to lose her during an EXiles mission he almost rejected her.

When sufficiently angered in combat, Proudstar is War. Deadly, uncontrollable, barely stoppable. He has been likened to a raging, wounded grizzly, and he can become unable to talk.

(Asked if he really likes smelling flowers) “Just me and Ferdinand the Bull , I guess.”

Nocturne about T-Bird : “He went swimming… well, he said it’s closer to walking on the ocean floor. He’s pretty heavy and hasn’t a lot of body fat. Not too buoyant… He actually doesn’t need to breathe much and his vision is excellent underwater so… he really likes ‘swimming’.”

Drawbacks:
Exile (involuntary), Strange Appearance (which gets stronger as he gets angrier), Minor Rage, MPR (no sense of taste).

I assumed that nearly none of the persons encountered in alternate realities has any HPs. 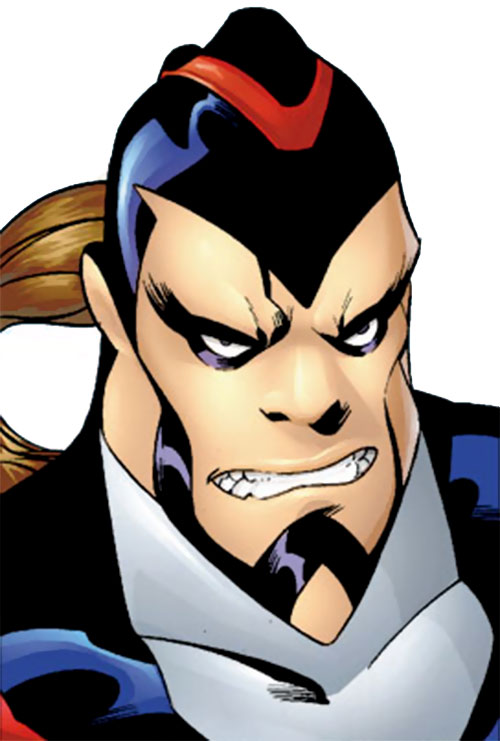 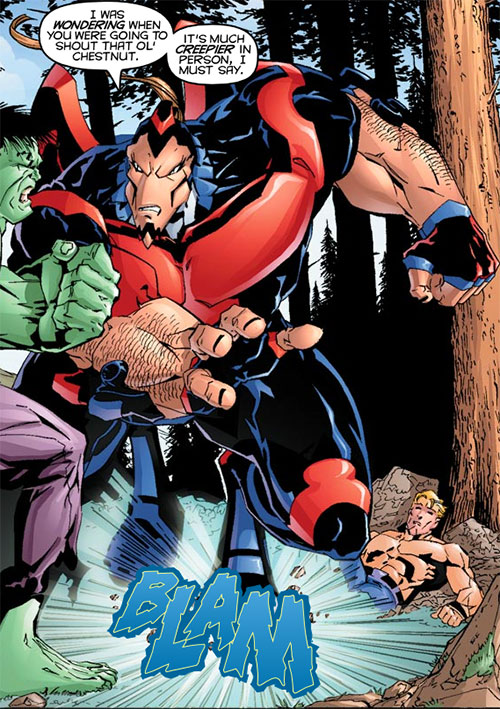