T. Hawk doesn’t have a lot of flashy chi  based powers. But what he does have going for him is that he is the biggest guy in the entire Street Fighter circuit. He basically relies on raw power.

Furthermore, his study of Thunderfoot martial arts has allowed him insight into various animals and how they move. In DC Heroes RPG terms, that’s Jumping and Gliding.

Other than that in typical fictional Native American fashion he’s also a gifted outdoorsman and is skilled enough to make a living as a wood carver.

T. Hawk was the greatest warrior of the proud Thunderfoot tribe. Then, many villagers had disappeared mysteriously. Sensing something ominous, Hawk left the village. During Street Fighter Zero 3, he looked for Shadaloo to try to stop them from kidnapping his tribe members.

One of these members was the doll, Juli (whose real name was actually Julia). It is unconfirmed whether or not he actually found Juli, though. 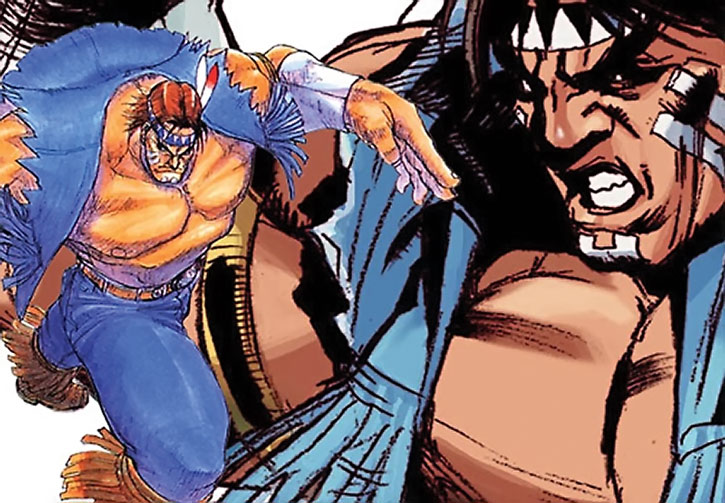 (Juli was originally intended to be Noembelu. But that was changed to Juli for the sake of not having to make a new character for the newer version of SFZ3 that included T. Hawk. So now it’s Juli, despite how that makes no sense given Juli’s German nationality).

Maybe he found her after she was transported out of the base by Cammy.

In T. Hawk’s ending, he noted Julia continuing to cry out for Bison. T. Hawk stated that he believed that Julia would overcome what Shadaloo did to her as like him, sacred blood ran through her veins. He then took her back home.

…somehow he did this despite how Shadaloo was supposed to still have his homeland during SF2 Revival. That’s kinda odd, given that Revival changed so many other small facts that would reconcile it with SFZ3. I guess they maybe missed this one by accident. Or the village he lived in is outside the Thunderfoot’s sacred grounds.

T. Hawk participated in SF2 hoping to bring down Bison once and for all. He confronted Bison, but Bison simply mocked him, telling him that he took T. Hawk’s homeland because it was impossible to resist taking something so precious. He invited T. Hawk to return to his homeland and see his great work. Later, Gouki killed Bison and Shadaloo collapsed. 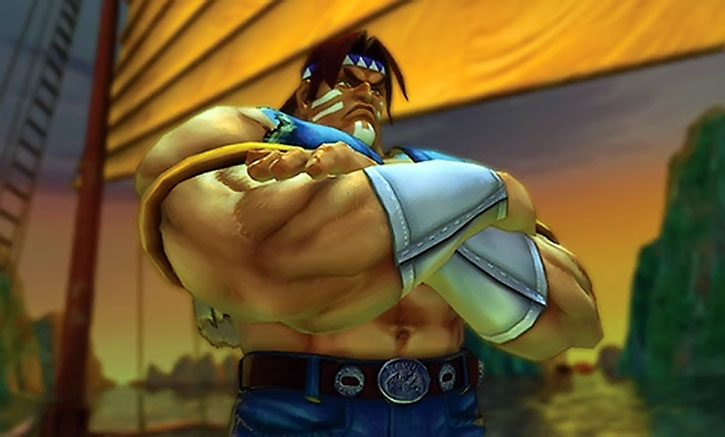 Now that Shadaloo was gone, T. Hawk’s homeland was finally free. But when he returned home, he found to his dismay what Bison had done to it. It was barren and lifeless.

However, T. Hawk refused to give up. He promised to make his homeland great again, and to rebuild it!

It was just announced that T. Hawk will be in the upcoming Super Street Fighter 4 game in 2010. No details about his story have been announced yet.

T. Hawk seems like a simple all around good guy who just wants to do the right thing. Despite all the injustice he and his tribe have faced in the past he just wants to keep them safe and live a quiet peaceful life. Even in the face of being kicked off his homeland and Bison having laid waste to it he simply refuses to give up.

He also seems quite content to share his culture with others by selling his woodcarvings to tourists as souvenirs. 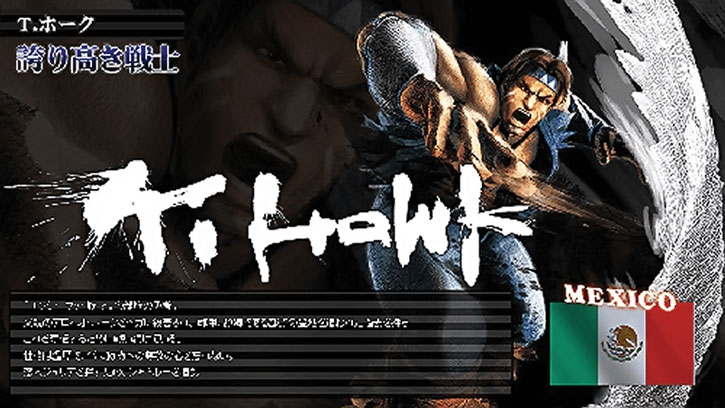 It should also be noted that in the tradition of his Native American religion all people have a totem or spirit guide and are named as such. T. Hawk’s totem is obviously the Thunderbird. The Thunderbird is intelligent, powerful, and wrathful.

All agree that one should go out of one’s way to keep from getting Thunderbirds angry. It was also said to reside on the top of a mountain, and was the servant of the Great Spirit the Thunderbird only flew about to carry messages from one spirit to another. It was also told that the thunderbird controlled rainfall. 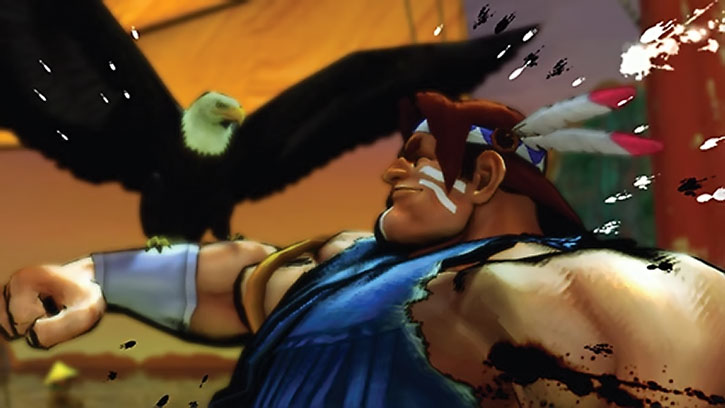 “Father ! I will take back the sacred ground for you. Together with me !”

T. Hawk can probably be dropped in as is. He would probably be opposing Lex Corp. or some other shady corporation as the ones who kicked him and his people off their sacred lands. 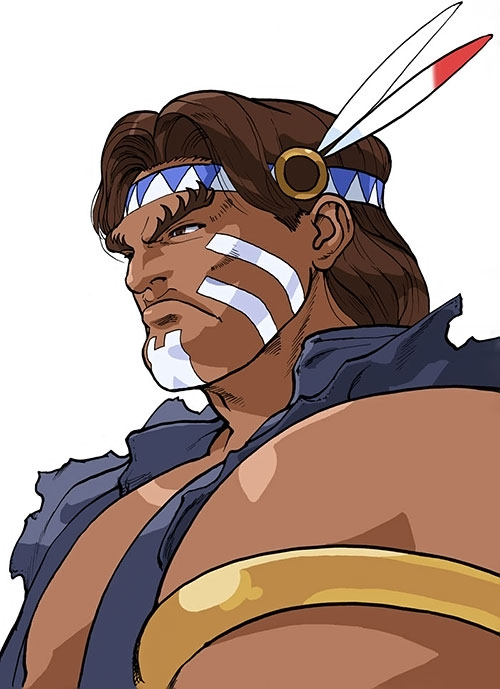 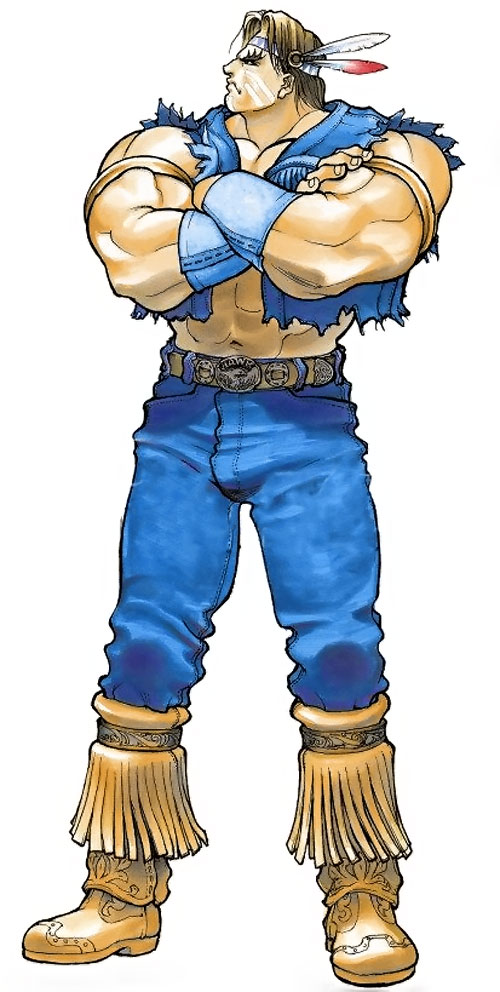 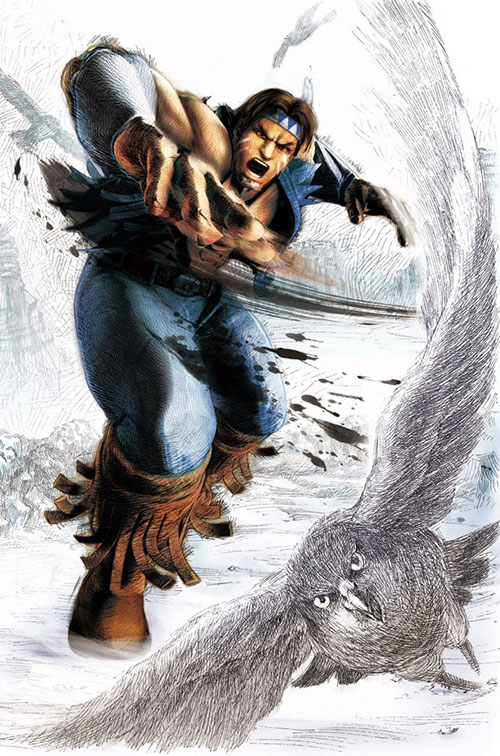