Starting with a landmark 1984 movie, the Terminator franchise brought to the huddled, quailing masses the image of the skeletal, chromed, unstoppable, implacable killer robot. Of course, there has been killer robots before, but this one looked particularly evil and credible.

Given their specifications and the impact Terminator had, Skynet Terminators are also classic opponents in suitable tabletop RPG sessions.

The T-800 is the epitome of the combat droids created by Cyberdyne Systems. This model was actually created by Skynet itself.

A T-800 (or the Cyberdyne Systems Model 101, as it also is called) is composed of an interior titanium steel casing and an organic exterior. This construction makes it both extremely physically strong and hard enough to take attacks from heavy firearms with no significant damage. They are extremely hard to destroy or even stop. Even while shot into pieces they still crawl around to succeed in its mission.

It resembles a human being enough to pass by without greater inspection and has internal nuclear engines enabling it to function for up to 120 years.

The “brain” is composed an ultra advanced new processor with an built-in learning processor. It appears to have a very large memory capacity. The learning processor enables it to gather new skills through experience (including human interaction). The processor is able to sort and process information at superhuman speeds and it is unable to calculate wrong.

The programming of the android excels at making it lethal – the programmer has been a real genius. It has full programs for handling visual data and audial information including image enhancing and digital recording. Anything seen or heard can be replayed perfectly at any time.

It has complete programs for recognizing weapons and immediately using them with the proficiency of a master. Target tracking/locking systems are also integrated. The android is an expert at handling any type of vehicle.

Additionally, the T-800 model is very skilled in certain military skills such as demolition, hand-to-hand combat, etc. To be more effective in killing humans it has detailed maps over the human anatomy and its own anatomy for making improvements and repairs.

All Terminators also have an built-in radio receiver and transmitter enabling them to communicate over long distances with each other or their home base.

The post-apocalyptic future battle at the beginning of T2, in solid 1080p. I remembered it spending more screen time on the T-800 infantry but heh, still good.

In a near future a sentient military computer named Skynet becomes self-aware. When the terrified scientists try to turn it down, it protects itself by attacking the Russian and starting the third world war. Russia retaliates with nuclear weapons and soon the world is in turmoil and hell.

The T-800 model Terminators are the main combat troops of the future Skynet computer. Skynet uses these to combat the remaining humans. The goal is to finally exterminate them and eliminate them as a threat to its existence.

In this future era the human rebels will have a great leader named John Connor. Connor is really humanity’s last hope – and Skynet realises this.

In a desperate attempt Skynet uses newfound time traveling technology to send back a Terminator model T-800 to kill Connor’s mother Sarah Connor before John is even born.

John Connor manages to sent a soldier to warn Sarah of the coming threat. That soldier later fathers Sarah’s son John Connor. Thus, John sent his own father back in time to meet his mother. Sarah Connor miraculously survived the attack and even succeeded in destroying the T-800 (Terminator). 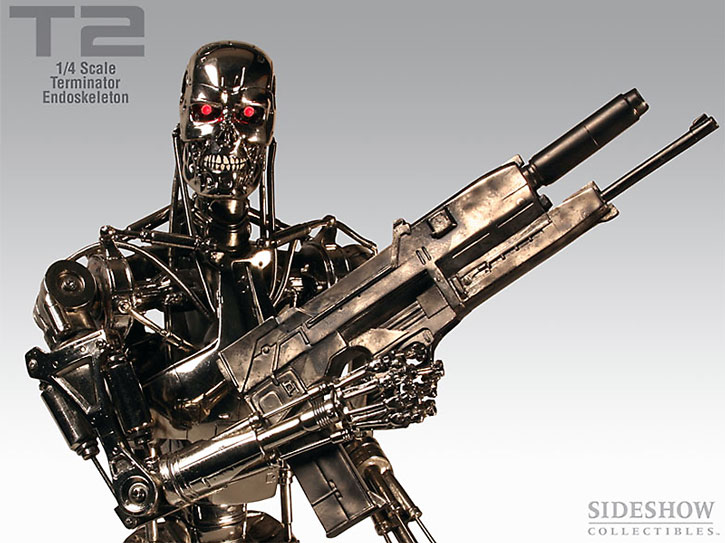 Some time after this Skynet attempts the same plan again. But this time it attacks Connor himself at the age of ten. A new prototype of a terminator machine, the T-1000, is sent back in time to eliminate John.

The T-1000 is composed of liquid metal. It has the full combat package, and is also capable of changing its form and shape, regenerate lethal damage and much more. The future John Connor manages again to sent back a protector. This time a pre-programmed T-800 model Terminator is sent back in time.

For more details on this, see the Sarah Connor and the T-800 write-ups (Terminator II).

In Los Angeles, in 2029, Skynet has already been destroyed. Unfortunately the remaining Terminators don’t need a leader and continue their war against mankind.

The human rebels manage to send back five troopers; Colonel Mary Randall, Raol, Naomi, Bart and Alan, back in time to 1991. They are to destroy Cyberdyne Systems and thus prevent their time from ever happening. The Terminators, knowing the rebels plan, send back four terminators to stop them; 1825.M, C890.L, HC875.S and C850.D.

While the rebels try to kill the current project leader, named Dr. Hollister, the Terminators protect him. They even help him to create the Terminator technology and Skynet. All of the rebels except Colonel Randall, Bart and a new ally, Dr. Astin, die in combat against the Terminators.

When it appears that they too would die at their hands, one of them, the half-human/half-terminator 1825.M, changes sides. It destroys two of his Terminator colleagues and saves Mary. The last Terminator kills Bart before they can escape to safety. C890.L remains at large and continues with its secondary objective ; to kill Sarah Connor.

Later, the future terminators send another T-800, named Z000.M, back in tim. She is to assist the other four, who now are only one remaining (not counting 1825.M). Mary, Astin and 1825.M travel to Mexico in an attempt to find Sarah Connor. Z000.M and C890.L establish contact and work together to kill the rebels and Sarah Connor.

The rebel Terminator 1825.M, also called “Dudley”, builds a weapon capable of destroying the Terminators. In the showdown that follows the new weapon successfully destroys Z000.M, but C890.L escapes despite heavy damage.

Later still, 1825.M has recurrent problems with his Terminator side attempting to take control over him. Surgery has to be performed on him to switch off certain cyborg functions, such as the radio communication with the Terminators. The surgery is performed by Dr. Astin, who steals information from the data banks of 1825.M and leaves him to die instead.

“Dudley” is saved by Mary. Meanwhile, the C890.L has repaired itself, and returned to its primary objective : to kill Mary Randall, Dr. Edwin Astin and 1825.M.

At the same time four more partisans are sent back in time to destroy Cyberdyne Systems. In a final battle at Cyberdyne Systems all new rebels except Hooks, and 1825.M are killed, as is the C890.L itself. Only Colonel Mary Randall survives, and with the information stolen by Astin Skynet can still become a reality.

All Terminators of the T-800 series resemble huge humans ; either male or female. They’re usually appear with swelling muscles and an impressive built. While posing as humans (as long as their organic outer layer is intact) they use clothing fitting their current pose. In the comics using police uniforms was popular.

Although they move somewhat mechanically and a bit stiff, the difference compared to a human motion pattern is mostly too little to enable detection. When their exterior shell has been destroyed they usually just walk around like a metal skeleton with no clothes at all.

At all instances, they carry around heavy amounts of weaponry. Sometimes melee weapons, always firearms and occasionally rocket weapons.

The T-800 model Terminator has very little personality. It has, in its basic mode no understanding of human emotions at all.

The T-800 is the standard killer droid of Skynet. If using the Hex idea from the Sarah Connor write-up the T-800 would be the shock-troops of Borsten. They can be sent back in time to kill opponents such as Sarah Connor, John Connor, or Jonah Hex if using that approach.

In the future world they’d also represent the elite force of Borsten in his attempts to control the world. Having such a resemblance to Metallo, the T-800 technology could be based on old remains from Metallo himself and thus make the true creator of the future technology not Borsten himself, but Lex Luthor (giving the T-800 a nice connection to the DC Universe).

Note:
Might possess an additional Subskill at least 3 APs for various missions.

By Peter S Piispanen aka The Angel . 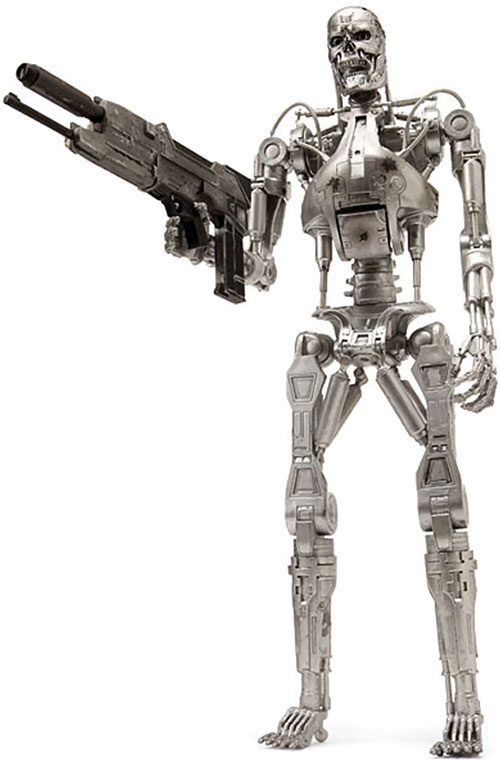 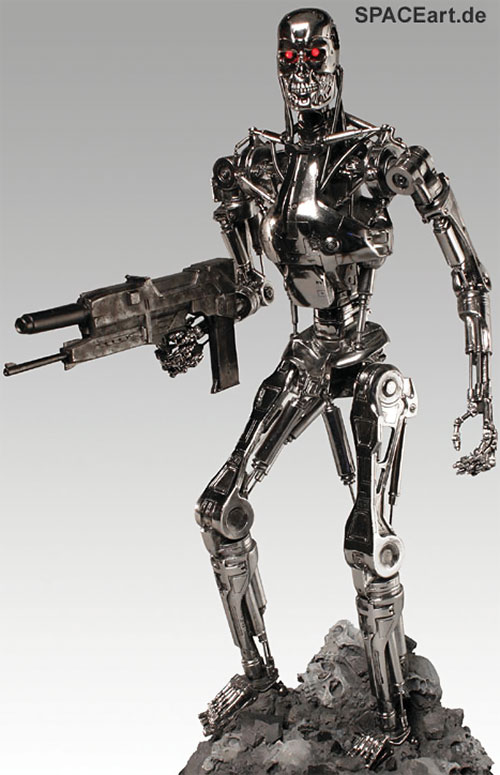 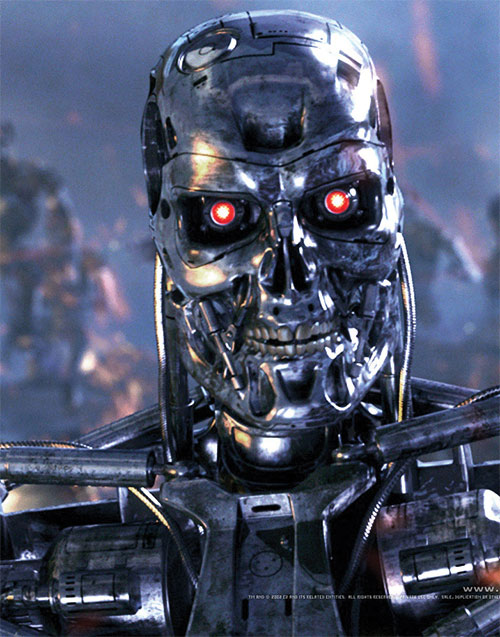 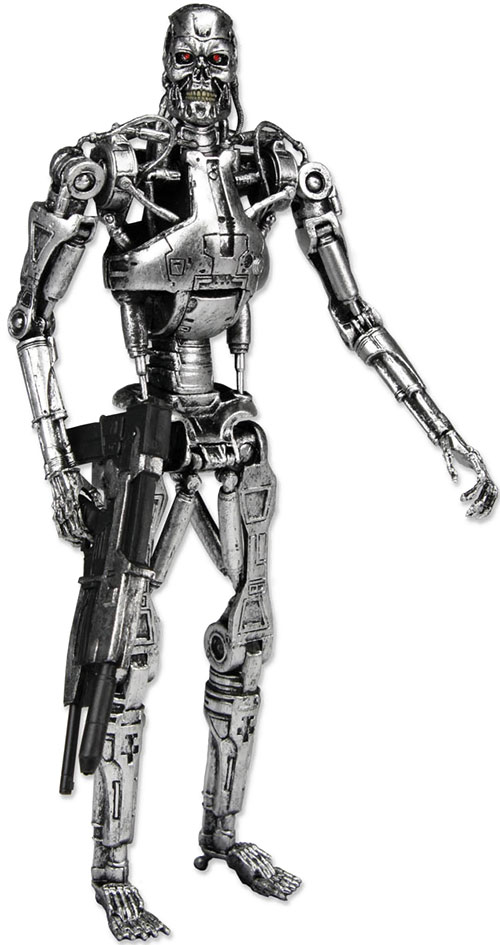