Tabula is an artificially intelligent android. He can morph  his body to appear as anyone he wishes.

He also possesses some measure of super-strength and can stretch his body to aid in grappling targets.

Tabula is a native of an alternative reality, whose Earth fell victim to the madness of its Sersi. He was saved by Proctor, who claimed his reality had also been a victim of his Sersi. Proctor recruited Tabula into his Gatherers, to hunt down and stop the Sersi’s of other dimensions before they did the same to their worlds.

Some travellers to alternate realities have trouble physically adapting to a dimension where a version of them already exists. They can be left disoriented and weakened. Proctor discovered the “Gathering” ritual as a way around this. It involves locating the traveller’s counterpart and killing them.

At some point, Tabula’s curiosity became a problem to Proctor, so he placed Tabula in stasis.

When one of the Gatherers, the Swordsman (Jarvert) was captured, Proctor released Tabula. He sent him as bait for Earth-616’s  Vision, enabling the other Gatherers to capture him. After swapping the mind of the Vision with that of another Vision they had Gathered from another reality, Proctor sent his Vision to infiltrate the Avengers. 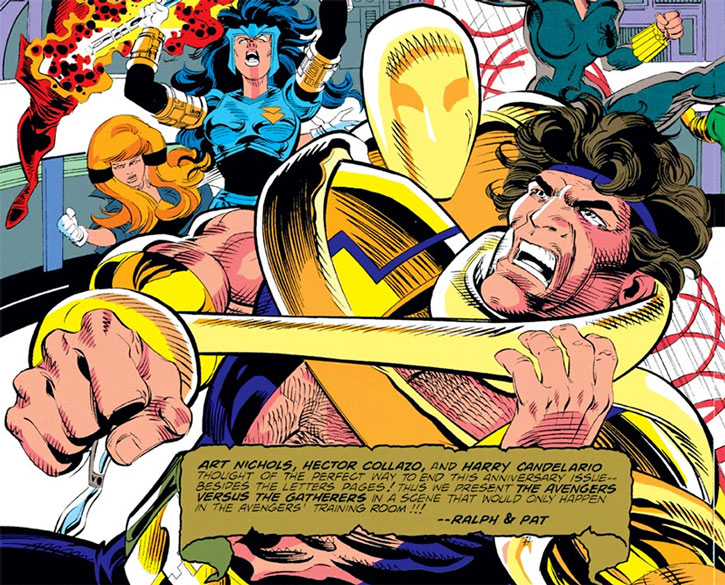 The Gatherers’ Vision failed in his attempt to kill the Swordsman, although he did seriously wound him. He was captured, and led the Avengers to Proctor’s citadel in the Andes.

The Avengers stormed the citadel and battled the Gatherers, freeing their Vision. Proctor revealed to the Avengers that he was a previous Gann Josin of Sersi, and that her increasing madness would be a threat to the world if she was allowed to live.

Proctor activated the self-destruct mechanisms of his citadel. He then teleported himself and Ute away, abandoning Tabula and the other Gatherers to the citadel’s destruction. It is unknown whether he survived.

Tabula possesses a cold curiosity about the world around him. He tends to speak in a calm, formal tone.

In combat he picks on weaker targets, or tries to support his teammates by restraining their foes from retaliating.

“I have served Proctor well in my time, Magdalene. This is nothing extraordinary.”

The Gathering would probably work better in the DC Universe. There, it’s already established that travellers in Hypertime  cannot survive on a world where a counterpart of them already exists. Substitute Zatanna for Sersi, and the Justice League for the Avengers. Tabula would be a counterpart to Chimera.

Bonuses and Limitations:
Self-Link (Snare) has No Range.

While he doesn’t show any Self-Link (Snare) in his actual appearances, he does in a pin-up of the Avengers fighting duplicates of the Gatherers in a training session. So I’ve modelled this.