Tabur is an obscure Marvel character, tied to Tigra.

He only appeared a few times, starting in 1978.

We suggest that you first read our article about Marvel Comics’ Cat People. It explains a lot of context.

Reading the Tigra series as well, which starts with The Cat (Greer Nelson), wouldn’t be a bad idea either.

This covers more material than I expected. Therefore, let’s have some chronologically and thematically appropriate music. So, 1978… yeah, Deacon Blues.

It’s a classic — and gave its name to one of my fav circa-1990 bands — but its once-notable use of soft jazz, smokey atmosphere and sax lines has since been done to death.

Tabur seems to have enhanced physical abilities – strength, agility and speed. But not to a level comparable to Tigra’s.

Tabur is strong enough to use a car transmission as a melee weapon. And he’s agile enough to once have landed on his feet more quickly than even Tigra.

He doesn’t seem to have real combat training, and fights using his raw abilities.

Tabur apparently has decent technological skills. Enough to tinker with “weird science” devices invented by others. 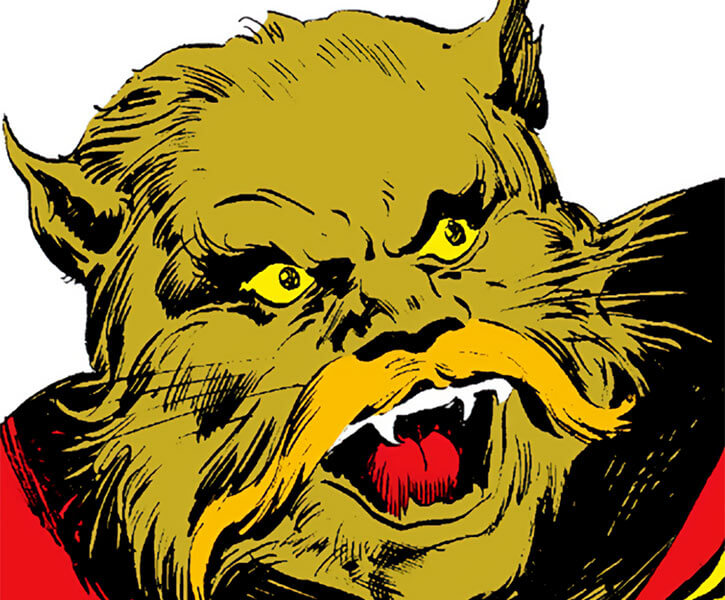 Tabur was one of the New Men. Meaning an animal hyper-evolved into a sapient humanoid by the High Evolutionary at his historic base of Mount Wundagore, in Transia.

(If you want to know more about that, check the Spider-Woman (Jessica Drew) profiles.)

He was apparently evolved from a house cat. Tabur might be the only New Man from that stock, though the heroic Lady Shadra might also have been a Felis catus before being upliftedTurning an animal into a sapient, more human-like life form.

One caption implied that he never joined the Knights of Wundagore (the local military).

Tabur is said to have been barely tolerated by the other New Men. From later events, we can assume that he behaved in a contemptuous and evil manner.

Much of the history of the Wundagore base was tumultuous.

In the mid-1960s, a rogue creation of the High Evolutionary, the Man-Beast, uplifted his own army to overthrow his creator. The battle was, as the saying goes, most fierce and awesome. The H.E. and his New Men only won thanks to the intervention of Thor Odinson.

Tabur found it prudent to watch the battle from a distance. He thus saw the Man-Beast defeated, then exiled into space with his followers.

Tabur was carefully making his way back when the entire Wundagore science citadel rocketed off into space. The uplifted feline, the only creature of its kind, was stranded on Earth !

Having lost his only home, Tabur snapped. He decided to become a predator and conqueror.

However, what he did during the following years is undocumented. 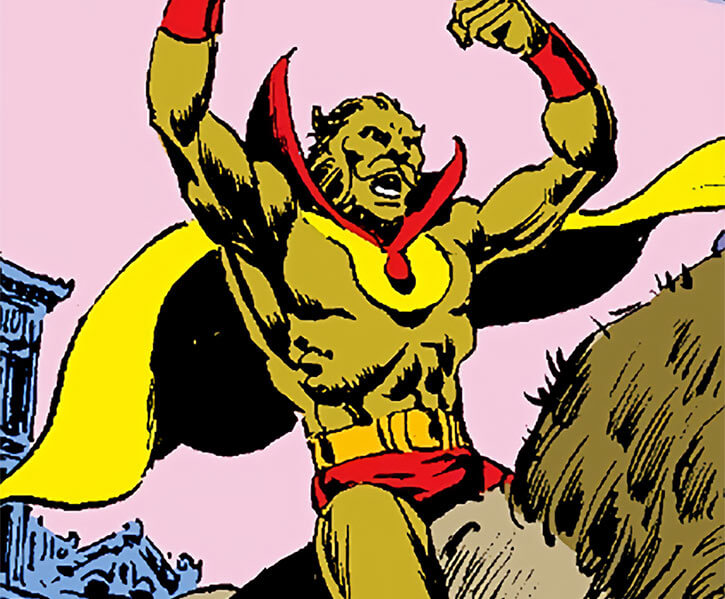 Tabur came into contact with the secretive Cat People. They decided to adopt him as one of their own. Perhaps in the hope of curbing his evil streak.

In 1978 the Cat People built an “electro-genetic patterning” rifle. It could turn Tigra back into a human if she wanted to.

The treacherous Tabur stole it, and turned the device into a devolution ray. He then rampaged through New Orleans, turning zoo animals into rampaging prehistoric beasts and people into ancestral primates.

The local Cat People and Tigra intervened. But Tabur shot his adoptive community with his ray, turning them all into sabretooths. However, they were still loyal toward Tigra in this form. And they were now better fighters.

Tabur was soon defeated by Tigra. She used the evolution ray to revert him to being a house cat. Apparently, the kitty slipped away in the confusion.

Tabur eventually evolved back into his humanoid sapientCapable of intelligent reasoning form. Though he now looked a bit different.

Since other New Men — such as the Man-Beast — have repeatedly pulled off the same feat, this is presumably part of the High Evolutionary’s enhancements.

Tabur somehow discovered and reached the Land Within. This is the dimensionOther realms of existence that are not our universe where the forerunners of the Cat People were imprisoned centuries ago.

There he confronted the King and slew him. Perhaps by exploiting the unwillingness of the Cat People to harm each other.

Tabur assumed the royal mantle, presumably due to some sort of local law. But he needed to consolidate his power. And of course there was the matter of being able to leave the Land Within.

Tabur took the Balkatar amulet for his own.

The Balkatar is a sort of retainer that could be sorcerously summoned to Earth. Thus, having the amulet meant that Tabur could return to Earth once somebody conjured the Balkatar.

The next step of his plan was to capture Tigra and make her his mate, greatly consolidating his legitimacy.

In 1990 somebody finally summoned the Balkatar. Tabur responded to the conjuration. He saw that a near-unconscious Tigra was near the summoner – apparently an ideal situation.

However, things didn’t go well. Tigra put up a mean fight before finally collapsing. Worse, the other person present was Agatha Harkness.

The old lady didn’t just defeat Tabur. She used the Tigra amulet to shoot the Tigra soul into Tabur in such a way that :

Tabur was chased off by Ms. Harkness’ cat Ebony. He hasn’t been seen since.

“Observe, comrade Cat-People — witness your saviour — the instrument of your destiny ! I have come to wipe the human vermin from this world — THAT THE CAT-RACE MAY RULE THE EARTH ! You were too weak — too afraid to do it yourselves — but now Tabur shall lead you !” 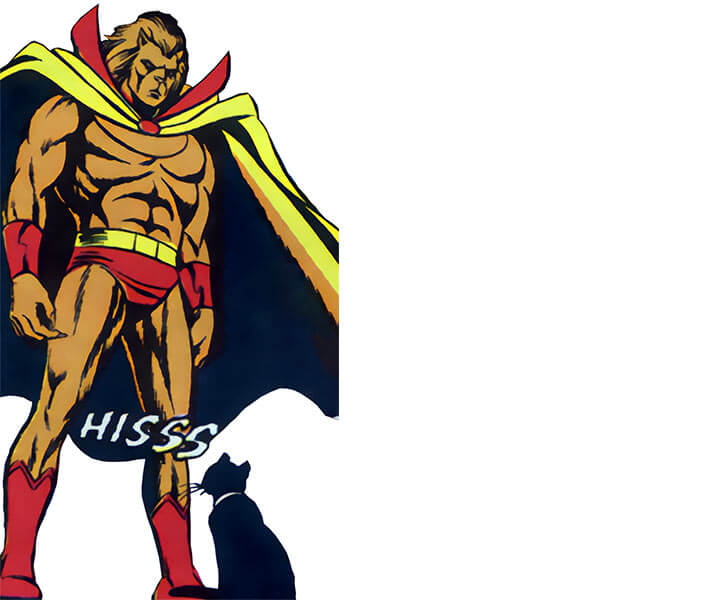 Ultra Vision is Night Vision Only.

Tabur was briefly King of the Cat People in the Land Within. What that entails in game terms is undocumented.

He also apparently usurped the role of the Balkatar but didn’t seem bound by the normal Balkatar code of conduct.

He once had a devolution ray. This is your standard beam that turns mammals into its loose Miocene  -era equivalent (so something ape-ish for humans). It presumably turn reptiles into their Jurassic equivalent. The mentality changes accordingly.

Whether a living being can resist this devolution ray is unrevealed. Perhaps AV/EV 12/12 against the target’s BODY/BODY.

How long the effects lasts is unrevealed. Tabur eventually shrugged off its effects, but being super-evolved he likely was a special case.

The beam could also be used to instantly cancel the devolution.

Due to his low screen time, most of the stats are speculative.

He likely doesn’t have all Technology applications, and likely had a few additional Advantages. Not enough material to say.

He once had a devolution ray. This is your standard beam that turns mammals into its loose Miocene -era equivalent (so something ape-ish for humans). It presumably turn reptiles into their Jurassic equivalent. The mentality changes accordingly.

Whether a living being can resist this devolution ray is unrevealed. Perhaps it’s an unusual Affliction 12 Effect.

How long the effects lasts is unrevealed. Tabur eventually shrugged off its effects, but being super-evolved he likely was a special case.

The beam could also be used to instantly cancel the devolution.

Writeup completed on the 9th of December, 2009.