Takeshi Kovacs is the ultimate trained saboteur, insurgent and infiltrator. He is nearly immune to shock. As an Envoy he was downloaded into new bodies and into any variety of circumstance to push governments and powerful individuals into the actions desired by the UN.

Takeshi Kovacs lives in a world where most people, him included, have a Cortical Stack implanted in their spine. In the case of death, or in some cases convenience, the digital mind and memories of a person can be moved to a new body.

Kovacs has worn many bodies as circumstances require. The physical characteristics of each vary.

Takeshi Kovacs is a former Envoy. The Envoy’s are his period’s ultimate threat for governments that are not compliant. Before he was an envoy he was a marine. Before that he was a violent street thug. He fought on a dozen worlds and for causes he didn’t give a damn about. He succeeds at what he does because he lives the mission.

Envoys are not allowed by law to go into either politics or business. At the end of his time with the Envoys (reduction of forces, he was downsized) he became a criminal. It was easier than being a mercenary. His life became a Mickey Spillane like noir of bloody adventures where clients hired him to use his Envoy skills to solve their problems.

By the time of Woken Furies Kovacs he found himself cast in the role of a hero unwillingly.

Kovacs is a body hopper who is a societal chameleon. He could appear to be anyone or anything. He is hideously dangerous no matter what form he takes.

Takeshi Kovacs is a self loathing complete jerk whose one saving grace is that he hates all people equally. Life has used him hard and he has returned the favor. He will permanently kill targets when it is not required if he grows incensed at why things are happening the way they are.

He is smart and scary deductive. On occasion he gets consumed by a sense of poetic justice and does what he feels is right. If Sam Spade lived 2000 years in the future and could re-incarnate as needed he would be Takeshi Kovacs.

“It’s all just blood on my knife or shit on my dick.”

“If any world disobeys, any government ever refuses to cede to a UN order, they send the Envoys. That’s it. Good bye. You’re done.”

Kovacs shtick is very much associated with the body changing that is part of his world. He would be a great Reece like (Terminator I) time traveler that appears in a plot when completely unexpected and wearing a different body each time. He could act to help the characters if the are doing what he wants and will fight them if he must.

A character with this advantage can literally to their own heart. The largest use for it would be the ultimate way to avoid torture. Usually this power is combined with some form of invulnerability or else it would be a single use advantage.

Physical stats are for the combat sleeve worn in the book Woken Furies. Kovacs’ Power Reserve and Recall are with him in any body. 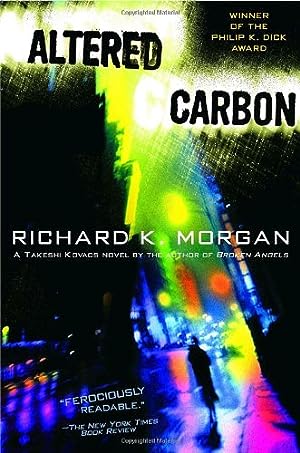