For those unfamiliar with the material, we strongly suggest that you first read our XXXth Century Guardians of the Galaxy team profile.

A feline Inhuman, Talon has a high level of agility. Thus, he can jump and bounce around short distances with ease. He has sharp claws, which he can fire at will, instantly regenerating them, and he has a prehensile tail.

He has received mystic training from Krugarr, who sensed his latent talent. However, Talon lacks the discipline to truly advance in the art. Simple things like sensing magic, and arcane events, or floating himself off the ground in meditation, he can manage. But when he tries anything more adventurous, the magic tends to get away from him, turning on him.

Following his transformation into a more feral state, he showed evidence of being super-humanly strong and durable, and of having an enhanced sense of smell.

Following his actions against Dormammu he was rewarded with the Ancient One’s amulet. This artefact greatly enhanced his sorcerous abilities, providing him the mental discipline he lacks naturally. The amulet also allows him to see things as they truly are, shorn of all façades.

Born into the enslaved Inhumans colony on the moon, Talon could never accept the enslavement in the way the other Inhumans had. When Krugarr, the Sorcerer Supreme, appeared and offered him the chance to become his disciple, Talon jumped at the chance.

Despite his natural aptitude, he lacked the discipline to progress far. They parted ways amicably, remaining in contact.

While exploring New York, Talon witnessed the arrival of the Guardians of the Galaxy. They were fighting the Punishers street gang alongside the Commandeers. When Guardian Vance Astro, was badly wounded, Talon fetched Krugarr. Talon led Krugarr to the Comandeers base, where he healed Vance.

Talon then accompanied the recovered Guardian to help his team. He was soon offered membership, which he accepted.

When the team travelled to the 20th Century, Talon came down with a hereditary Inhuman disease in transit. Their first port of call was Attilan, to find a cure. Healed, Talon also had a chance to meet the legendary Inhuman royal family.

When they returned to the 30th Century, the Guardians discovered Dormammu had come with them. The magical tyrant merged with his contemporary self, becoming more powerful. He attacked, and the Guardians battled him alongside the Galactic Guardians and the Ancient One.

Dormammu killed the Ancient One before being defeated by the sorceries of Talon and Krugarr. Following the battle, Krugarr passed the Ancient One’s amulet on to Talon, who’d proved himself worthy of it.

During the Guardians’ battle against Malevolence and Mephisto Talon’s back was seriously injured, although he kept the extent of the pain from the others.

When the team was ambushed by Rancor’s mutants, and the others were pitted against the mutants, Rancor held Talon herself, forcing him to impregnate her.

When he finally got free, Talon used his magic to teleport the Guardians back to the Icarus, far away from Haven II, despite Vance’s orders. He refused to tell them why he’d done so, and became increasingly sullen and aggressive.

During their search for Charlie, Talon’s back pains increased. As a result, he used the Icarus’ Trans-Molecular Reconstitutor, which he’d previously seen used to heal Charlie when he was badly injured. Not knowing how the device worked, he overdid it. Talon was transformed into a more feral form, greatly increasing his aggression and insubordination.

When he tried using his magic against his team mates, Krugarr appeared to remove the Ancient One’s Amulet from him, claiming he was no longer worthy.

Eventually gaining a degree of control over himself, Talon went to Krugarr, intent on retrieving the Amulet. Krugarr showed him an image of his newborn son, and offered to teach him to control the impulses his new form imposed on him. Talon agreed, and again became Krugarr’s disciple.

Goofy and adventurous, Talon was inquisitive and intelligent, but had no real discipline, happily allowing his curiosity to lead him around. He was the least aggressive of the Guardians at this time.

Following his transformation, Talon was far more rebellious, aggressive and bestial, sniping at Vance’s leadership, and demanding that he be made leader.

“If there’s one thing I learned while I was the disciple of Krugarr, the sorcerer supreme, it was never to let my anger get the better of me ! An angry opponent is a sloppy opponent, and a sloppy opponent can be beaten !”

Bonuses and Limitations:
Sorcery is uncontrollable (-0, see below).

Rather than taking Bashing Damage from trying to use Sorcery at too high a level, Talon loses control of the spell.

The check for damage is carried out as normal, but any RAP’s act as the APs for the effects turning back on Talon and his allies, such as when he used the Crimson Bands of Cyttorak on Galactus and they went out of control, capturing Talon and his team mates.

Prior to his transformation he had STR 04 BOD 05, Claws were at 05 AP, and he didn’t have Analytic Smell/Tracking Scent, or his Rage. 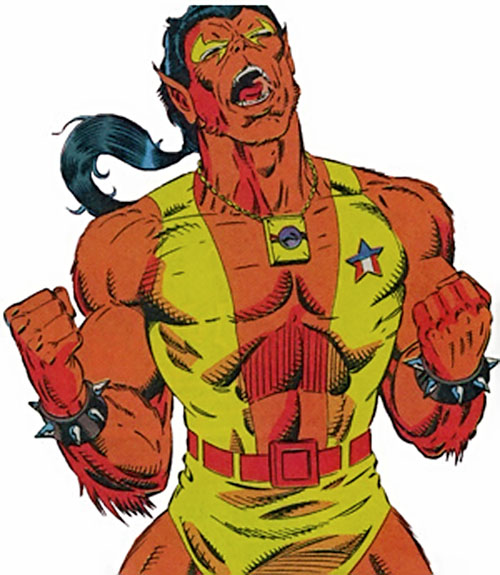 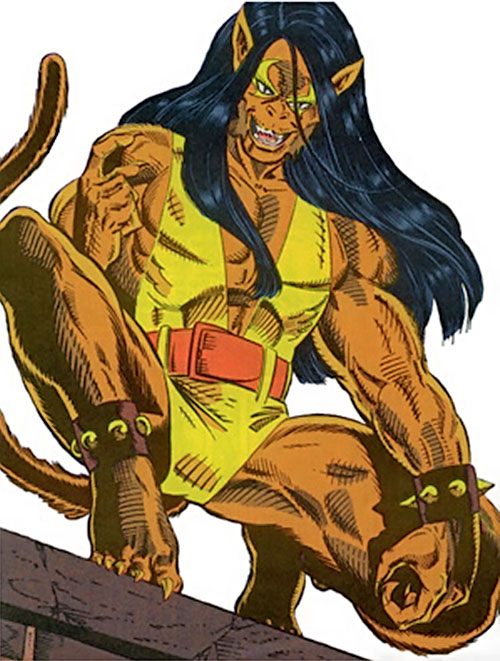 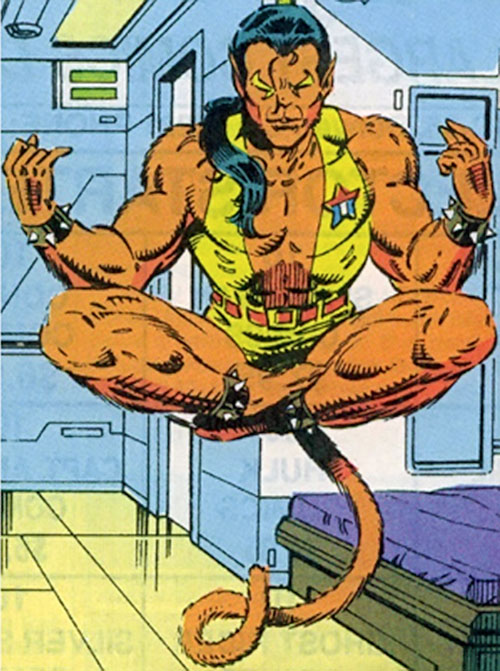 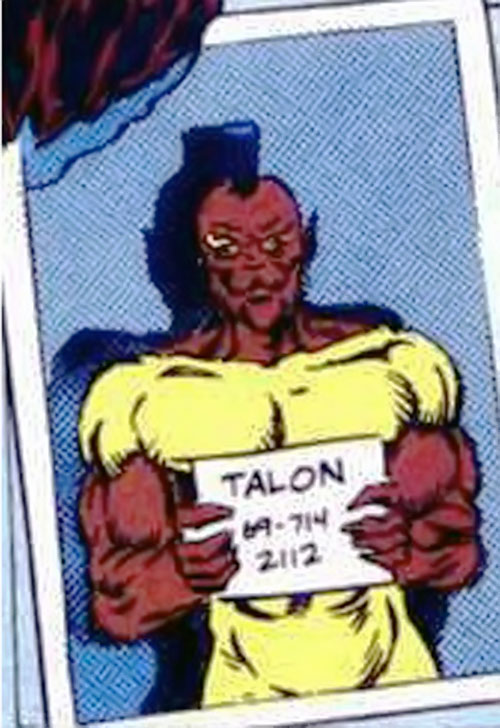