Talos the Untamed is an unusual Skrull. He’s a mutant born with superskrullian strength and endurance, but completely unable to change his physical shape.

Hardships during his upraising has made him push his ability in the common Skrull combat skills to a master’s level. Thus, he’s an unusually good unarmed and armed combatant in addition to being an able pilot and military man.

After losing it in combat, Talos has exchanged his left eye for a cybernetic version of it instead.

Talos was born a Skrull with an unusual genetic defect. It hindered him from changing his physical shape like his Skrull brothers. Being a mutant by nature he was also imbued, during adolescence, with a superskrullian level of strength, durability and endurance.

Such an abomination of nature (according to Skrull standards) wouldn’t have been allowed to live past adolescence. But the fact that Talos was also the Skrull Emperor’s nephew saved his life.

During all his life Talos had to fight hard for acceptance among his peers. He became a superior, proud warrior later using his mutant abilities for slaughter and war. In time he became feared by his enemies and respected by his peers. Thus he earned the honourable name of Talos the Untamed.

Then one day during a campaign against the eternal enemy, the Kree, he was captured in a cowardly ambush. A true Skrull soldier would have provided the enemy with a corpse instead of a prisoner by using their suicide pill. But for the first time in his life, Talos’ courage failed him. Seeing nothing honourable in suicide he refused to do so.

At the end of the Kree-Skrull war Talos was returned to his peers. But he was now dishonored and even shameful. He was now called Talos the Tamed or Talos the Subdued.

His uncle, the Emperor, again offered him the opportunity to take his own life and thus regain his honour. But again Talos couldn’t do so. He was a soldier and simply had to die a glorious death in combat.

Seeking to redeem himself he again joined the Skrullian invasion forces. When the Skrulls were invited to Rick Jones’ wedding, Talos was among these guests. After the wedding he stayed on Earth, in Las Vegas, for a while, in order to find a worthy opponent to prove himself against.

There he met the incredible Hulk, reputedly a fierce and deadly warrior. Talos attempted to enrage the Hulk so that he’d have to fight for his life. But the Hulk, with Banner’s intellect, simply refused to slay Talos.

Tricking Talos’ story from him the Hulk understood what it was all about. After a fight that became more and more fierce the Hulk finally, pitifully begged for mercy.

Talos shocked at such behaviour refused to have anything to do with him. He returned to his peers in the spaceship. Talos was deeply unsatisfied by his meeting with the legendary Hulk, but his peers had been watching the fight. They were impressed by his lethal fight against such a legend and hailed him Talos the Untamed again.

Talos realizing that he had indeed done well against the Hulk and regained his self-esteem, honour and confidence. In fact, it appeared as if Talos himself had been judging himself the hardest of them all. He, since then, serves as one of the most prominent Skrull warriors in existence in the Skrull invasion forces.

Talos the Untamed is a very muscular Skrull.

He wears a regal, militaristic Skrull uniform. It is blue in colour, with black stripes along the legs, along purple boots with white lines and gloves, a black and white belt, shiny, metal shoulder pads, a purple headpiece and a regal purple-white band across his chest. Like all Skrulls he has pointy ears and green skin, but his eyes are white.

The left side of his head is covered by metal, including his left eye, which has been cybernetically replaced into a yellow version instead (supposedly after losing it in combat). As Skrull warriors go, he actually looks pretty impressive. He moves confidently and fast, even when he felt dishonoured.

The most important thing in the life of Talos is honour, glory and combat. He’d be happy to die in battle against a powerful foe. To die like a coward or by suicide is unthinkable to him and he’d refuse to participate in anything not considered glorious by Skrull standards.

He’s very confident and sure in his abilities. He judges his own mistakes and character harder than anyone else does and puts nearly unreasonable expectations on himself. He probably believes that his peers have accepted him easier since he’s the Emperor’s nephew (which probably isn’t true), and therefore fights even harder.

Having been raised with great expectations of him, the reactions of his peers are important to him. He’ll consider himself a war hero only if it’s generally accepted among them. Being a true warrior he is a ruthless fighter who doesn’t hesitate to kill foes or even enemy civilizations.

Talos has above-average Skrull imagination and is rather eloquent in his speeches.

“This has to be the most pathetic thing I’ve ever seen. I refuse to have anything to do with anyone who acts like such a coward. And it doesn’t matter whatever reasons you may have for doing so. I may be dishonored, but you are in no way honorable enough to fight against me.”(commenting on Hulk, who pitifully acts like he’s giving up the fight).

Well, Skrulls are really Marvel. Either make him a mutant Durlan or even white Martian with purely physical powers or keep his origin exactly as is but make some DC group his main opponents instead.

A co-op with Paibok the Power Skrull or the legendary Super-Skrull would also be nice. 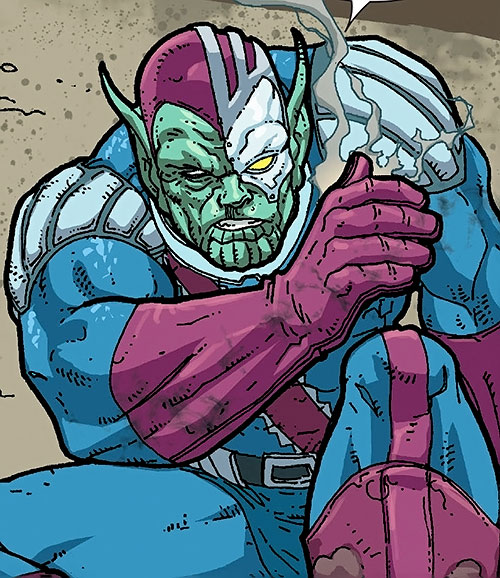 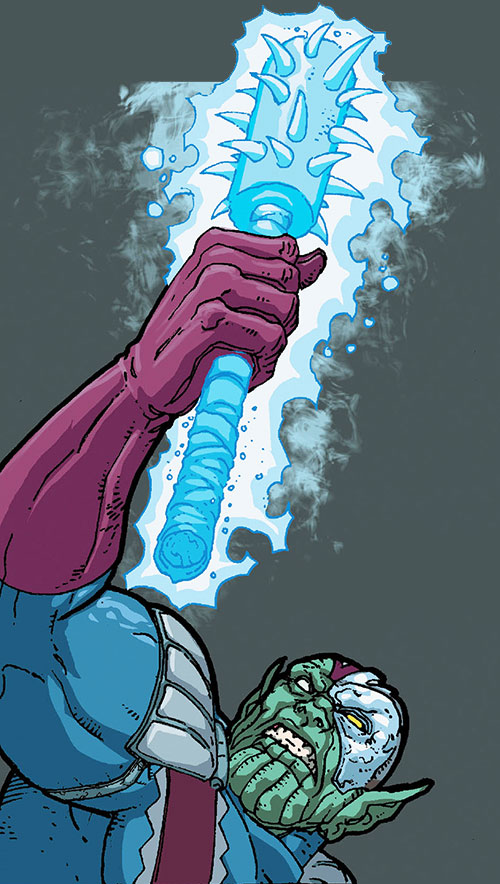