This bloke is… quit obscure. He only appeared in a 1966 Aquaman story.

He’s a by-the-book Yellow Peril character. This racist, xenophobic imagery goes back all the way to the actual Mongol invasions of Europe. The shock of those never quite went away. It slowly weakened over time, but it remained a major framework in the views of Asian peoples.

Tamerkhan the Cruel was “the greatest scientist of the Orient”. He created many ingenious devices in the service of Genghis Khan. Furthermore :

Seven centuries ago, Tamerkhan the Cruel, “the greatest scientist in the Orient”, used his remarkable inventions and discoveries in service to his master, Genghis Khan. Many victories were won for the Khan.

But neither Tamerkhan’s scientific know-how nor the martial prowess of the four-armed Attucka could prevent the Khan’s empire from dissolving into chaos following his death. Tamerkhan and Attucka escaped their enemies using the scientist’s fantastic submersible, the Dragon-Ship.

Though the two Mongols lived well as pirates on and under the open seas, the pair wished to bring the world back under the domination of the Golden Mongol Horde. To that end, Tamerkhan invented a serum, based on the biology of sea turtles, which would extend their lives for centuries.

Three centuries ago, Tamerkhan captured an Asian princess in order to conceive a child. Although Tamerkhan hoped for a son, a daughter, Liat, was born. Tamerkhan he vowed that she would be as savage and merciless as any Mongol warrior. For the next three hundred years, Tamerkhan, Attucka, and Liat plundered the seas together.

During that time, the scientist discovered a means to allow the trio to breathe and communicate underwater.

(The fate of Liat’s mother is unrevealed. Presumably Tamerkhan did not grace her with his life extending serum.)

Eventually, Tamerkhan grew weary of his wandering existence. For the subsequent events and to avoid repetition, see Attucka’s profile.

Tamerkhan the Cruel is the very image of the wizened Asian mastermind with fiendishly arched eyebrows and a long white mustache and beard. Again – it’s a 1966 story.

He wears a long, red mandarin-style robe with white sleeve cuffs over plain black leggings. His tan shoes curve at the toes. Upon his head rests a strange, crown-like, golden helmet that covers his hair.

Tamerkhan wears his Dragon Talisman on a chain around his neck. It is made of silvery metal and decorated with a scowling dragon’s face on the front. It is the size of a large coin. His left index finger bears his Water Control Ring, a metallic piece of jewelry with a tiny antenna.

The Dragon-Ship is approximately the height, width, and length of a train engine. It is golden in color and styled to look like a short muzzled Chinese dragon.

The body of the ship is segmented, allowing it to slither through the water like a serpent.

Circular viewing ports line either side of the craft and a serrated ridge runs its length. Its ’eyes’ are forward viewing windows and its energy beams emerge from nostril-like holes that rest atop a fearsome looking but apparently nonfunctional pair of jaws.

The three claw arms are deployed from a hatch near the top of the ship’s ’head‘. Four stubby fins protrude from the craft, two on the starboard side, two on the port.

The interior of the Dragon-Ship is like something out of Jules Verne; two parts mad scientist laboratory to one part Victorian siting room.

Tamerkhan the Cruel is the stereotypical mid-XXth century Asian super-criminal full of guile and treachery.

Although professing a weariness that prompts his desire to cease wandering, he takes to the challenge of conquering Atlantis with an evil glee. He isn’t too weary to notice the beautiful Mera, either.

He loves his daughter Liat. He treats Attucka as an inferior fit only to follow orders.

“Excellent ! Atlantis is falling into my hands like a ripe fruit ! Now, it is time to squeeze the juice from my triumph !”

Though Tamerkhan the Cruel has not resurfaced in the post-Crisis DC Universe, it is not impossible for his attempted takeover of Atlantis to have occurred much as it was first presented. While apparently killed at the end of his only recorded appearance, it is quite possible that Tamerkhan the Cruel faked the deaths of he and his daughter in order to escape Aquaman.

Alternately, he may have been returned to life by his Invulnerability Power once the Sea King had consigned the Dragon-Ship to the Dungeon Depths.

Once a reason for Tamerkhan’s return has been established, he could very easily be integrated into any seagoing campaign having established an underwater Mongol empire. He might even pop up in his role as pirate, sinking ships and stealing cargo.

Bonuses and Limitations:
Power Restriction: Telepathy only allows Tamerkhan to communicate with other sea-dwelling people. He cannot use it to initiate mental combat.

Tamerkhan’s Invulnerability: 04, slightly higher than his BODY: 03, accounts for his near millennia of life. 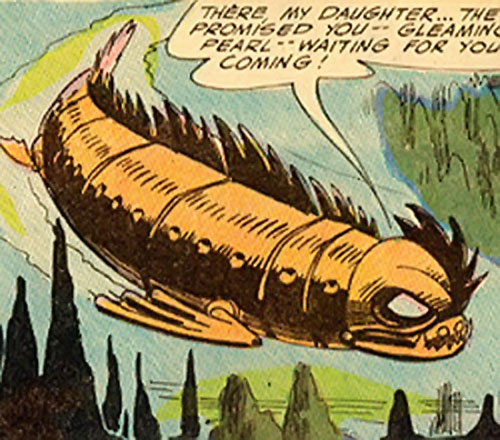