DNAgents was one of the more notable 1980s indie super-hero comics. It started publication in 1983, with Eclipse Comics. A good part of their fame back then came from being created by writer Mark Evanier .

They are quite easy to use in a wide variety of settings, perhaps even as Player Characters .

Lucius Krell came up with the Human Tank concept himself, as he is often proud to admit. Consequently, this DNAgent was built for sheer strength. Concurrent with his development, Matrix engineer were working on Tank’s special armor and weaponry. Maximum protection and maximum firepower were the operative phrases in their design.

Titanium bone sheaths were surgically fitted to his arms, legs and spinal column to give his body greater durability for lifting, carrying and throwing massive objects. This plus his heavy, bulky armor puts a great strain on his cardiovascular system. So a regulator was installed within Tank to alert him when he is pushing his physical limits.

His body armor includes a pair of “blasters”, which seem to be large-bore, automatic weapons mounted on his wrists. For commando-style mission, he also carries a pair of grenades.

The DNAgents were designed to be a commando squad that could take care of Matrix’s dirty work, from espionage to paramilitary action. Tank is the brick  of the lot. He excels and long-range engagements as well as in close combat.

At the very end of the series, the DNAgents were captured by Matrix. They were put back into the vats for future use, after Matrix convinced the public that everything to do with the DNAgents was just a big media hoax.

A colossus. Tank’s armor is shiny and metallic, the armor plates covering his upper torso, head and arms. The rest of the armor is a khaki metallic mesh. His helmet leaves his mouth area bare, and he wears red tinted goggles over his eyes.

Tank finds himself torn between devotion to the DNAgents and a fascination with his human ex-girlfriend, Casey. Other team members sometimes get the feeling that Tank doesn’t devote himself to the team as much as he should and he often feels very guilty over this. Reluctantly, he’s a big brother figure for Sham.

Also, there was actually an issue of Tales of the Teen Titans where a DNAgents-like group (the RECOMbatants) showed up, only to sacrifice themselves at the end issue (in that month’s issue of DNAgents, a Titans-like group, Youngblood, showed up, dying in a similar manner).

Bonuses and Limitations:
Systemic antidote only works against disease (-2).

Source of Character: DNAgents comics (Tank and the DNAgents were created by Mark Evanier). 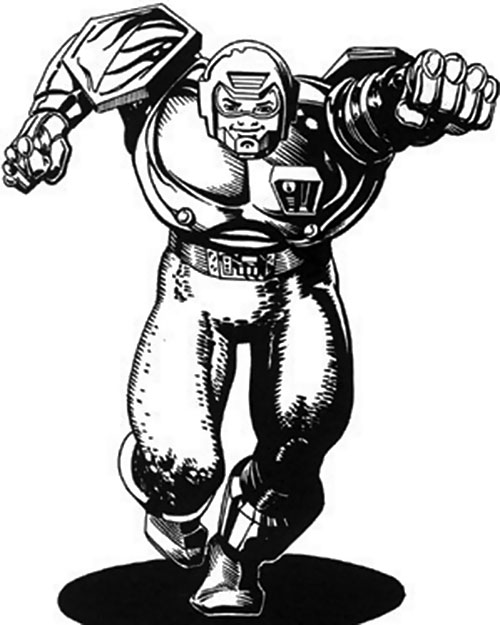