The Tarantula is a brutal, ruthless and highly skilled hand to hand combatant. His style seems to be a sort of acrobatic kick boxing, with ground work reminiscent of capoeira . He’s also a skilled marksman, though he rarely uses firearms as the Tarantula.

The Tarantula is quite strong, a very skilled acrobat, and fast enough to regularly hit even such superhumanly mobile targets as Spider-Man. However he is too aggressive, favouring offence at the detriment of his defence.

On the other hand, he often needs to hit but once. Both his gloves and boots have hidden retractile spikes, designed to be easily poisoned. The boot spikes, in particular, are often coated with the lethal venom of a Brazilian spider. The Tarantula also seems to have special training in, and experience at, fighting in the dark.

During his first fight against Spider-Man, the Tarantula was helped by a pair of costumed henchmen, Hidalgo and Juan. Both were exotic weaponry and martial arts specialists. They were pretty skilled. Though they never appeared again to the best of my knowledge, some Gamemasters may want to go for the extra-obscure and bring them back.

Rodriquez was eventually mutated in a huge spider-like creature. The mutation continued and he grew larger, giving him a strength level greater than Spider-Man’s but making his mind increasingly animalistic. In this horrible form he even developed the ability to spin and project webs.

Rodriquez hails from the (fictional) Latin American dictatorship of Delvadia. He was a member of a revolutionary group, conducting actions such as blowing up supply trains or kidnapping politicians for ransom. However, his fellow revolutionaries became disgusted by his bloodthirstiness. They expelled him. 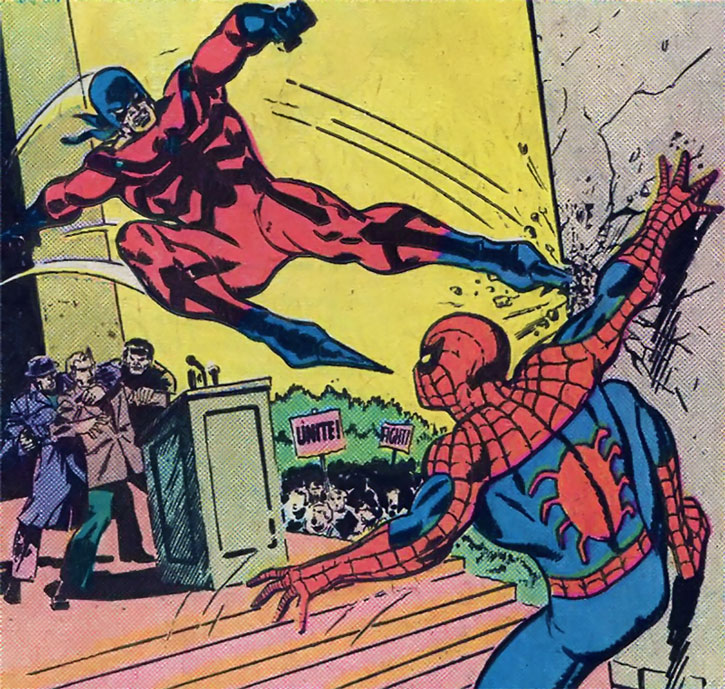 Rodriquez promptly joined the official military and volunteered to hunt down his former comrades.

Impressed by his abilities, the totalitarian authorities designed the Tarantula identity and costume for him, as the Delvadian answer to Captain America. The name was an homage to a Delvadian hero of the 1890s, César “La Tarantula” Mendivil.

However, during a torture session, Rodriquez lost his temper. He murdered a guard who wanted him to stop. The Tarantula was forced to leave the country. He went up North after grabbing his brother Hidalgo and a friend of theirs, the revolutionary Juan.

Land of the Ford Falcon

In 1974, the three men struck in New York City. Tarantula and his henchmen commandeered a tourist ferry and held the passengers for a massive ransom. Spider-Man (Peter Parker) intervened, but Tarantula forced him to leave by poisoning a sailor and throwing him overboard.

The Punisher (Frank Castle) came to kill the terrorists just as Spider-Man returned. However, Spidey was then kicked and poisoned by Rodriquez. 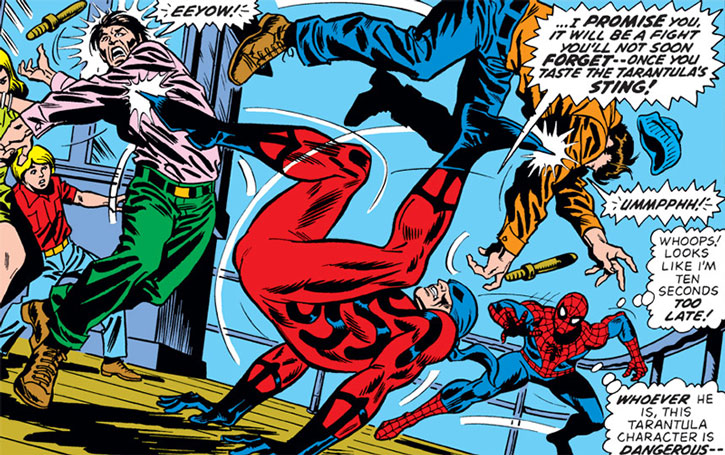 Tarantula duped the Punisher by telling him that Spider-Man was his accomplice. Rodriquez and his henchmen left in the ensuing fracas. However, Spidey and Castle realised that they had been played. They tracked the Tarantula down, with Spider-Man defeating Rodriquez.

A year later, the Jackal (Miles Warren) recruited Tarantula from prison. He had him assist in his revenge scheme against Spider-Man – which involved a Gwen Stacy clone and throwing Spidey from the Brooklyn Bridge.

Parker survived, and took down Rodriquez as the Delvadian ambushed him. The Jackal recaptured Spider-Man, but seemingly died shortly afterwards.

Schooled in the Americas

The Tarantula was soon hired and freed by Lightmaster (Edward Lansky) for a series of kidnappings and murders. His targets included the Mayor, though that one was foiled by Spider-Man. The scheme ultimately failed. Lightmaster blasted Rodriquez to prevent him from revealing his secret identity, but the Tarantula survived. 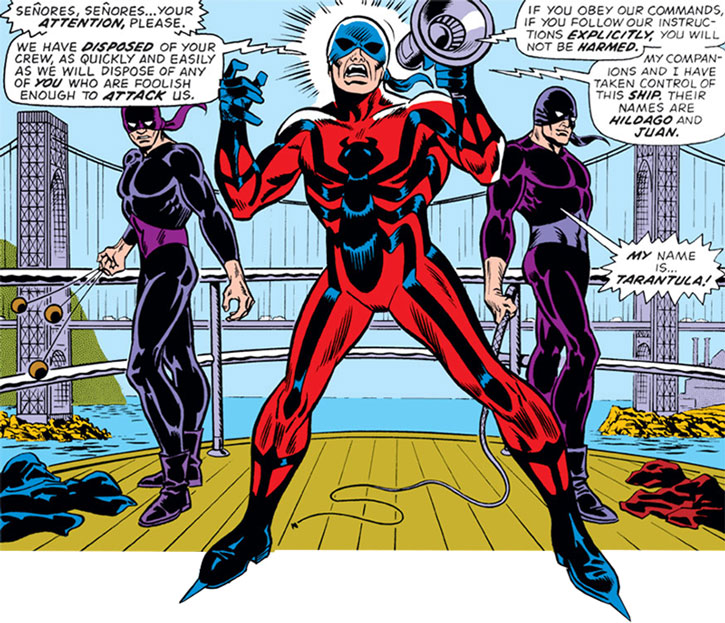 Somehow regaining his freedom once more, Rodriquez kept a low profile in the Miami area and engaged in smuggling activities.

In 1982 he was hired by a representative of the Brand Corporation, a subsidiary of Roxxon Oil. La Tarantula was to silence an informer known as “Nose” Norton. Again the Tarantula clashed with Spider-Man and failed in his assignment.

Day of the Condor

Brand representatives then offered to bestow superhuman powers similar to Spider-Man’s upon the Tarantula. Their condition was that he would afterwards help them to kill Spider-Man. The Tarantula agreed, and was injected with a mutagenic serum before being equipped with a a life support harness and placed in an electrolyte bath.

At that point Will o’ the Wisp (Jackson Arvad), who held Brand responsible for his own transformation into an inhuman creature, attacked the lab. This caused power discharges that radically affected the ongoing mutagenic process. Rodriquez was thus transformed into an 8-limbed being that resembled a humanoid spider, possessing superhuman strength.

Spider-Man and Will o’ the Wisp both battled the transformed Tarantula. The latter two fell into Jamaica Bay.

Both survived, and the Tarantula continued to mutate into an enormous spider. His mind was becoming increasingly primitive. Rodriquez could only speak in broken sentences as Spider-Man tried to contain him.

Horrified at what he had become, and seeing policemen massed on the sidewalk below, the Tarantula committed suicide by hurling himself from a tall building. He was dead from police gunfire before he crashed into the street below.

Tarantula is a wiry muscular man with a pencil moustache. His costume is blood red with deep blue motifs (mostly gloves, boots, a head scarf covering the upper half of his head, and a spider motif on his chest). His boots have two poison-coated dagger-like spikes, and his gloves have retractable poison-coated spikes.

A vicious, brutal, highly mercenary opponent. The Tarantula loves violence and killing, and excels in operations relying on those. He prefers working as a part of a band – either fighting alongside the villain who hired him, or hiring thugs to support him. His plans tend to be efficient and direct. 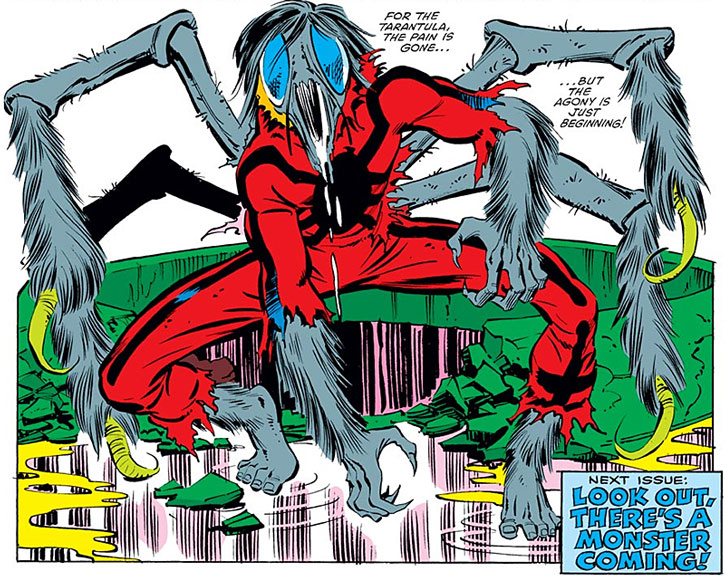 Of course, this being the mid-1970s, the Tarantula will overuse the three Spanish words and idioms the writer knows, constantly saying “amigo”, “adios”, “madre de dios”, “hasta la vista”, “loco” and so on.

The Tarantula is exceedingly proud, and is always, always making speeches about how deadly he is, how nimble he is, how he trained to be his country’s Captain America, etc.. He acts like a proud patriot and obviously wants to be a greater-than-life, pulpish, Zorro-like soldier of fortune despite actually being a despicable psychopath.

This craving for panache will almost always overcome his bloodthirstiness. Despite being a psychokiller, his on-screen body count is remarkably low as he leaves his valued foes alive out of flourish.

As Rodriquez, his name is infamous among much of the Spanish-speaking world. He normally wears sunglasses and use false names (usually “Valdez”) when out of costume. 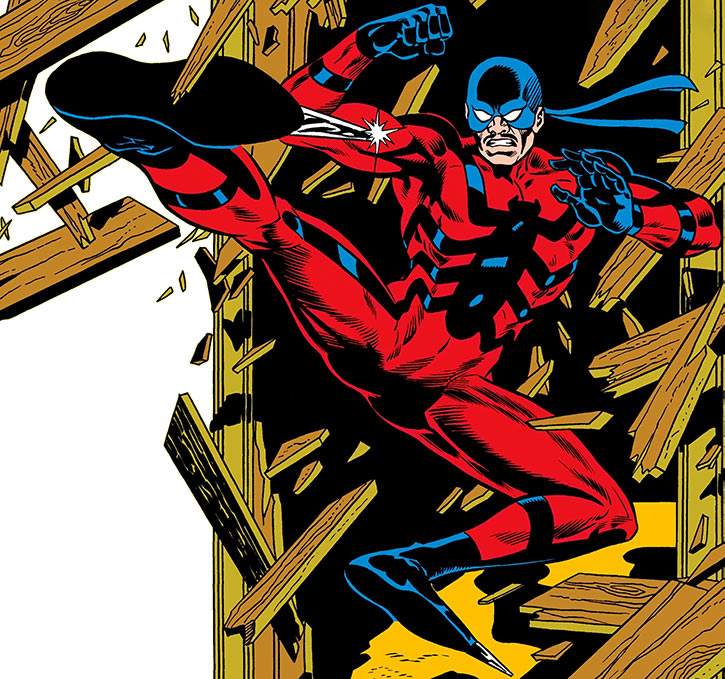 “¡ Idiota ! I am not your common anglo criminal to be trapped and insulted like a child ! I am Tarantula — and I will have revenge on you, who spoiled such a carefully considered plan !”

“Amigo… never turn your back on a tarantula.”

“Fool ! It’s not money I want – it’s you ! And you will come with me, now — or you will die where you stand ! Either way, it’ll make small difference to me, señor. In my country, life has little value — and men are tools to be used for the attainment of one goal — POWER ! You are a tool, amigo, and I will use you as I wish — whether you accept this willingly — or under force ! And if you do not understand this now, I can MAKE you understand !”

Despite his comparatively short career, the Tarantula is a classic minor spiderfoe. He could be recast as a dangerous adversary for the Batman and/or the KGBeast, with more politically-oriented plots.

Tarantula’s transformation into an horrific giant spider was gradual, and his abilities evolved. The Growth (and attendant 2 APs of STR and Skin Armour) appeared shortly before his death, as well as the Snare and Iron will.

“Then, Hidalgo must give you a reason for fear, si ? Perhaps this, tonto ? Now you will be silent, si ? And if Hidalgo’s hand is not enough to teach you manners, then perhaps his whip…” 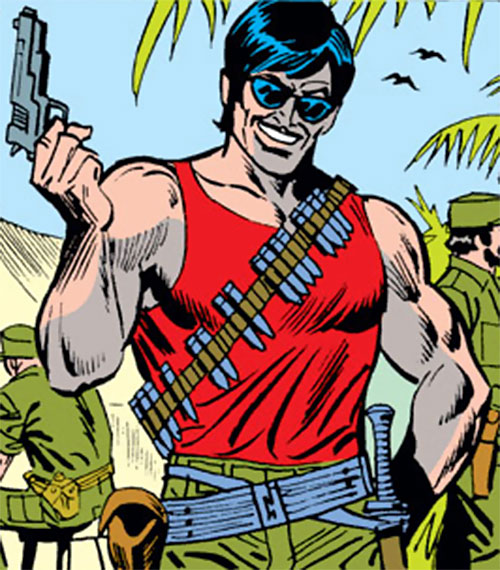