Tarkas is extremely strong and durable.

He also has a long prehensile tail, which can easily hold enemies still while he attacks them.

Tarkas is a native of an alternative reality, whose Earth fell victim to the madness of its Sersi. He was saved by Proctor, who claimed his reality had also been a victim of his Sersi. Proctor recruited Tarkas into his second team of Gatherers, to hunt down and stop the Sersi’s of other dimensions before they did the same to their worlds.

While Proctor was advancing his machinations against Sersi, some of his new Gatherers attacked the Earth-616  Black Knight and Sersi, without his permission. When the battle turned against them, Proctor teleported them away, and castigated them for their actions.

He soon confronted and captured Sersi, bringing her to his secret base, where he revealed to her who he was and how he had caused her breakdown.

Proctor moved his machines to the middle of New York City, where he activated the machines, using the captive Sersi and Ute as power sources. These began collapsing reality. The Avengers rushed to the scene, and clashed with Proctor and his Gatherers.

Tarkas is aggressive and quick to take offence, reacting without thinking. He is quick to enter battle, usually in the front of the attack, and relies on brute force to see him through.

“Survival, woman ! Survival ! To prevent what has happened time after time, on Earth after Earth, you must die !”

The Gathering would probably work better in the DC Universe, where it’s already established that travellers in Hypertime  cannot survive on a world where a counterpart of them already exists. Substitute Zatanna for Sersi, and the Justice League for the Avengers. 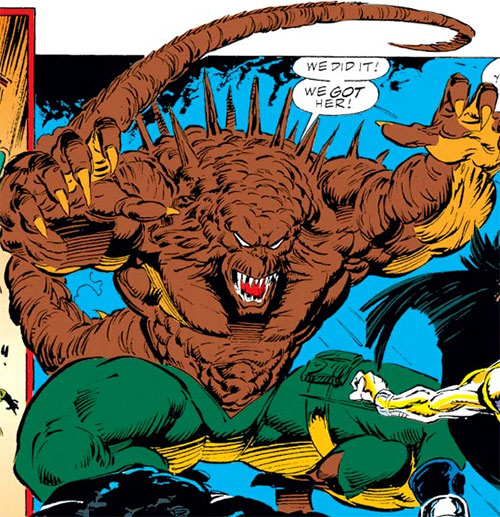