Task is a superb fighting machine and a natural athlete, with a mutant regenerative power. His abilities has been enhanced with cybernetics and biotech by the government.

He is now an extremely fast and sharp fighter, with

His regenerative abilities dispense him from breathing or aging.

The Bloodpool project wasn’t the finest moment of the US government’s superhuman projects. A score of nu-gene active teens were recruited from their families, prodded, tested, operated on, genetically and cybernetically enhanced. They were then subjected to a dangerous and gruelling training.

The promise was that they could one day join the prestigious Youngblood action team, a powerful combat force and media tool for the government. 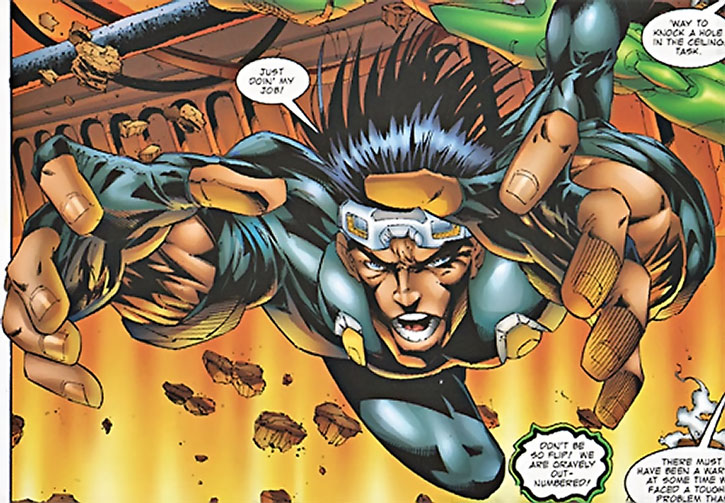 However, Youngblood director Graves was discovered to be a demon. During the upheaval, the new director, Battlestone, decided to forego the Bloodpool contracts. Despite all the promises and all they had been through, the Bloodpool subjects were downsized.

A few of them (Task, Psilence, Wylder, Fusion, Rubble, Seoul) chose to follow the advice of one of Seoul’s spirit guide. Thus, with the support of former Youngblood leader Shaft, struck on their own as a private, hero-for-hire outfit.

An early, lucky meeting with a millionaire in an unfortunate situation bankrolled them. Thus the group, which carries on the Bloodpool name, soldiers on.

Task has a vaguely manga  hero air about him.

“Take the rest of these suckers out !”