Franklin Richards is the young son of Sue and Reed Richards, of the Fantastic Four.

This profile is focused on a specific part of his life. When he was a member of Power Pack, a team of superhuman children, during the 1980s.

If you are not well familiar with 1980s Power Pack, you should first read our Power Pack team profile for context.

Franklin Richards is a mutant with limitless psionicPsionics are sci-fi style psychic powers potential. His power is so great, if he were to ever “cut loose”, he would cause planet-wide destruction.

To avoid this, Franklin erected a series of psionic dampers in his own mind. At this point, these dampers have managed to hold back all but the barest trickle of his true power. 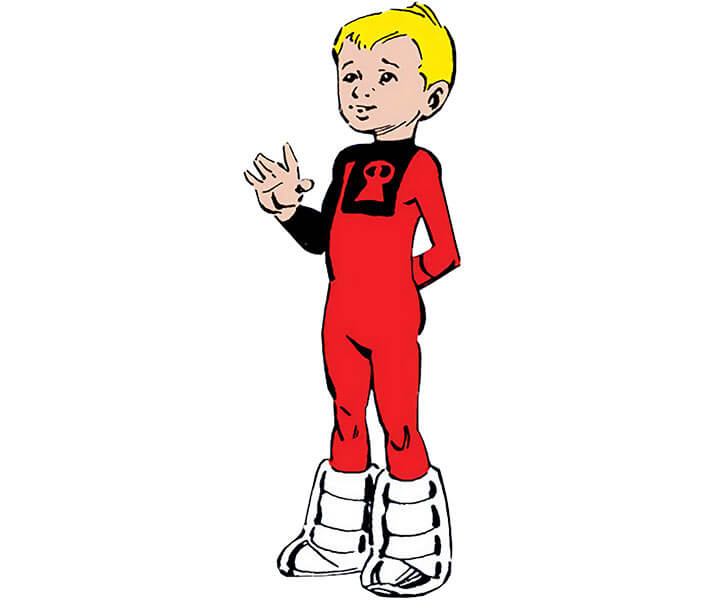 This trickle manifests itself in the form of precognitive dreams. The dreams have a high degree of accuracy, but can’t see more than a few days into the future.

Initially, Franklin needed to be asleep to use this power. Over time, his power grew to the point where he could see visions of the future while awake. These images appear at random and can confuse or scare him.

Franklin’s dreams are not limited to events in the future. While in a semi-conscious state, he can manifest a “dream-self” outside of his body. Frank’s dream-self is an illusory duplicate of his body that houses his consciousness.

Franklin is aware of everything that his “dream-self” experiences – including sights and sounds.

There does not seem to be a practical limit over which he can send his dream-self. He once projected it from the planet Earth to Snarkworld.

Franklin wears a special uniform (created by the smart-ship Friday), which is stored “Elsewhere” until he commands it to materialize. The costume:

The costume also has pockets which are actually apertures into an adjacent dimensionOther realms of existence that are not our universe. Franklin can store and retrieve objects from the pockets which clearly should not be able to fit within them.

The maximum carry capacity of the “magic” pockets is currently unknown. 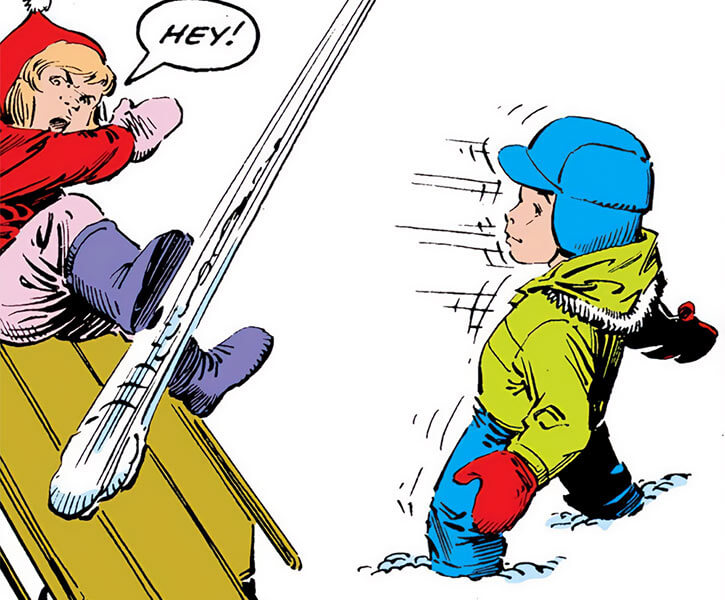 Franklin Richards is the youngest child of Reed and Susan Richards.

As a result of their mutated DNA, Franklin was born a mutant. Unlike most mutants, Franklin’s powers manifested themselves in his early childhood.

His parents tried to control Franklin’s burgeoning power; Annihilus hoped to exploit it. Annihilus kidnapped Franklin and placed him into a machine of his own design. Before anyone could save him, the machine unleashed Franklin’s full psionic potential.

Unable to rein it in, Franklin’s power ran wild and threatened to destroy the Earth. When the Fantastic Four arrived, Franklin had lost all semblance of control.

Left with little choice, Reed Richards employed a device that put Franklin into a coma.

The sleeper must awaken

He remained that way for months, until Ultron attacked the Fantastic Four’s home. Ultron was leaking large amounts of energy.

This energy stimulated Franklin’s comatose mind and caused him to regain consciousness. Better still, somehow his uncontrollable powers had returned to their pre-Annihilus levels.

This wasn’t to last though, and with time Franklin’s powers grew once more.

Recognizing the danger he posed, Frank imposed powerful psychic blocks on himself. The blocks acted like a dam in his head, walling him away from his full power.

Soon thereafter, Franklin started having visions of the future whenever he slept.

These dreams led him to his surrogate family, Power Pack. Franklin used the contents of his dreams to warn the Power children that Jakal was coming for them.

Jakal was the son of Queen Maraud. He had only one wish, to capture the Power children and use their powers to conquer Snark World. With the advanced warning, the Powers were able to defeat Jakal.

Grateful for Franklin’s help, the Power’s inducted him into their team and family. He took on the code-name “Tattletale” due to his ability to see the future.

Frank spent as much time with the Powers as possible, until the day that they went missing.

Frank first discovered that the Power’s were gone from his dreams. He dreamed that the Snarks had come back for Jakal and flown away with both him and the Power children.

He attempted to tell his parents what happened, but they were busy with other tasks.

Determined to help his friends, Franklin summoned the Powers’ Smartship Friday. The two then flew deep into space to rescue their friends (but not before leaving a note for his parents).

Franklin and Friday arrived at Snark World in the nick of time. Using Franklin’s “dream” power, they managed to save Kofi and the Snark Emperor (at the cost of Friday’s life).

By saving Bhadsha (the Snark Emperor), Franklin stopped Queen Maraud’s plans. He was then reunited with his friends and the group returned to Earth. 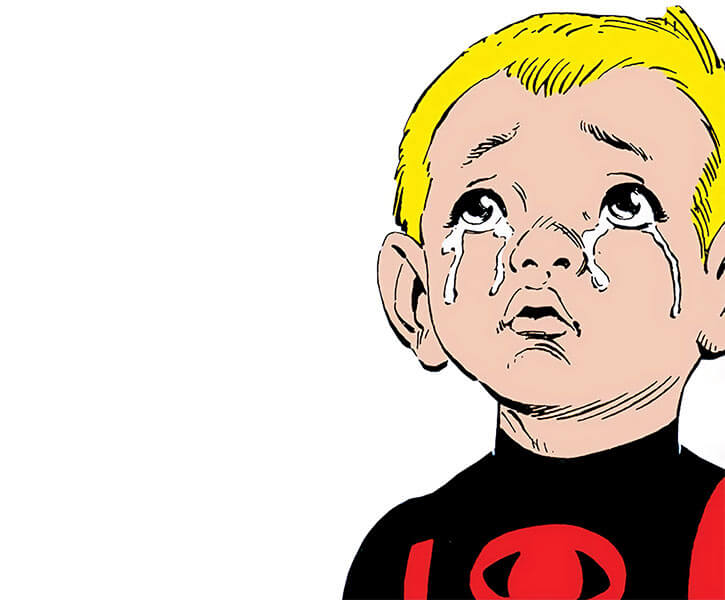 When Franklin returned to Earth, he found that no one was waiting for him. He believed that his parents didn’t care he was gone.

He stayed with the Power family for a few days, until his parents came home to get him.

To his surprise, his father had figured out the meaning of his note and blasted off to Snark World to get him back.

When the Fantastic Four arrived, they discovered that Frank had already gone home.

At that moment, Franklin realized that his parents did love him and he was truly happy at last. 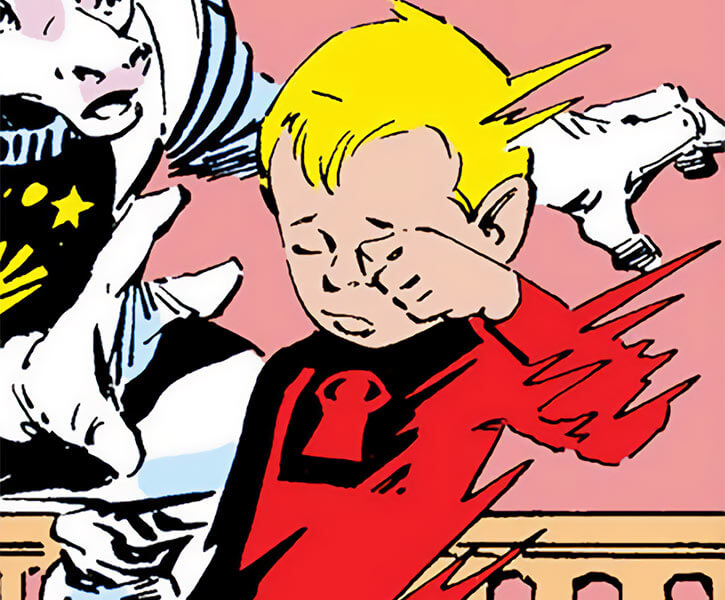 Frank is an adorable four and a half year old boy. He is of average height and build (for his age), and has short blond hair and bright blue eyes.

His costume is a blood red unitard that covers him from neck to boot.

The right sleeve of the unitard is pitch black, as well as a stripe that runs down the right side of his body and a square patch that runs from the neck to the middle of his torso.

Within the centre of the black patch on his chest, is a red key shaped patch with a black and white eye in the center.

A pair of silver-ridged boots complete his costume. The boots are reminiscent of those an astronaut may wear.

Even at his young age, Franklin feels the pressure of being the son of two of the world’s premier superheroes. He tries to emulate them in all ways, especially in the face of danger.

Like his parents, Franklin is as honest and forthright as possible. This doesn’t mean he’s above telling lies, he just tries to avoid them when he can.

Despite his uncommon maturity, Franklin is still a four year old. He can be gentle, loud, generous, selfish, sensitive, and bratty at any given moment.

One thing that defines Franklin, is his loneliness. Despite their best efforts, his parents rarely have time for him. Or at least, that’s the way he sees it.

It is for this reason that he cherishes his friendship with the Powers. In his parents’ absence, the Powers have become Franklin’s second family. He loves them without question. He would literally travel to another galaxy to help them. 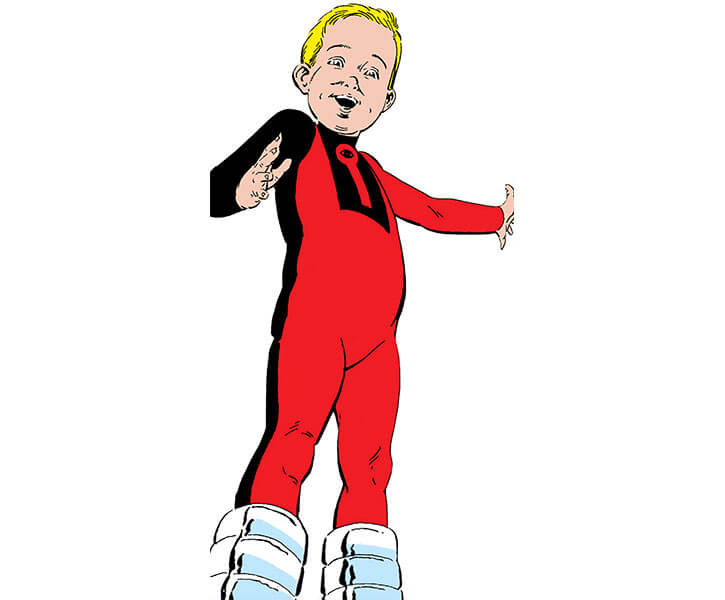 “No Jarvis, you don’t un’erstand ! It was a special dream…”

“My Mommy and Daddy are the Fantastic Four… well, half of ’em…”

“I dreamed Jakal caught us there… and it was all Katie’s fault !”

Spirit Travel has the Range Bonus (+1FC) and creates a visible and audible “spirit” (-1FC).