The “Dial V for Villain” crew are super-minor, low-powered jobbers . They were seen but once in a 1997 story and nobody cares about them.

Except for writeups.org, of course. We care about everyone.

By touching her tattoos, she can turn into monsters.

She never did have time to actually change, though. As Aztek put it: “Next time make your threat *after* you change into the monster. It’s much more effective.”

The Dial V for Villain mercenaries only appeared once, very briefly. They had been hired by Lexcorp to organize a fake hostage situation (capturing handicapped children visiting a super-heroes wax museum). Unbeknownst to them, the goal was to boost Aztek’s reputation as a hero and increase his chance to join the JLA.

The mercenaries knew they were just expected to give a decent fight, and counted on Lexcorp lawyers to quickly get them out of prison once their job was done.

Aztek being pretty good despite his lack of field experience, the Dial V mercs did not even get to give him a significant fight. They were swiftly defeated. However, instead of paying them, Luthor implied he would have them offed by the Hitman to save the money. What actually happened is unknown.

She actually seemed confident and to like her job, and clearly thinks that her power is really cool.

“Relax. Just let me touch one of my monster tattoos and I make Bloodhound look like Snoopy.”

Bonuses and Limitations:
Shapechange does allow imaginary critters and humanoids (+3), but is restricted to creatures depicted in her tattoos (-1).

Equipment:
Tattoo was waving what looked like a Beretta AR-70/223 assault rifle [BODY 04, Projectile weapons: 06, Ammo: 08, R#03, Advantage : Autofire]. Yet she preferred her tattoos in combat, likely because she’s not very good with firearms.

Tattoo’s customization angle is of course what sort of monsters she turns into. Go for your favourite theme — maybe :

My favourite would be that she’s a fan of old Doom video games and turns into DooM ][ creatures. But you can also be cute and go for old, pre-Crisis DC monsters like the Deep Six. Or small version of the numerous pre-FF giant monsters at Marvel. 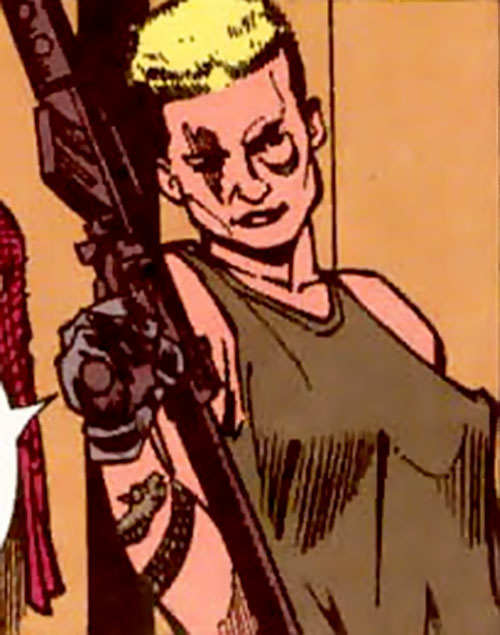