Since the Big Bang, Tech-9 has never had to reload any weapon in his hands. He simply never runs out of bullets. Tech-9 also developed minor telekinetic abilities, being able to attract guns to his grip.

Rolando is highly skilled in the use of pistols, enough so to shoot the guns out of the hands of multiple people simultaneously.

The Big Bang incident also enhanced his already formidable physical abilities. Tech-9 was able to stay conscious and fighting despite the severe beating he took during his battle with the superhumanly strong Holocaust.

Tech-9 is also a skilled combatant, has an excellent grasp of tactics, and is very charismatic. He is undoubtedly one of the few people that could command enough respect to create a gang out all of the different people that formed the Blood Syndicate.

Rolando Texador was a Bang Baby, a gang member who received superhuman powers in the wake of the Big Bang.

The Big Bang was supposed to be a rumble between all of the major gangs of Paris Island to settle their turf wars, once and for all. The Dakota City Police Department learned of the impending showdown and developed a special tear gas that also contained a radioactive marker.

Their plan was to use the gas to break up the Big Bang. Then they would trace the gang members down the next day by tracing the radioactive “tags.” Instead, most of those exposed to the tear gas died. And the handful of surviving gang members that lived had all developed superhuman abilities.

After the Big Bang gave him his powers, Rolando Texador took the name Tech-9 after his favorite type of pistol. Then he gathered his fellow survivors together with a proposal. Tech-9 wanted to form a new gang, the Blood Syndicate, with the aim of achieving substantive positive social change. They took over an abandoned door factory, which they simply dubbed The Factory.

Unfortunately, Tech-9 would not live to see most of his Blood Syndicate’s work. Soon after leading the gang on one of its first missions, a delayed side effect of the gas caused his powers to suddenly overload with fatal results.

An abstract art statue was erected in his honor in front of the Factory. After his death, Wise Son took over leadership of the gang, though it took Wise Son a long time to reach Tech-9’s level of inspirational ability.

Tech-9 was a lithe Hispanic man. He wore a spandex long-sleeved shirt and pants with leather gloves, boots, and baseball cap, all in black. His accessories were an olive green combat harness and sunglasses.

Tech-9 was a natural leader and strategist, always a step ahead of every one else. He planned big and planned ahead, and was willing to take bold steps to accomplish his goals. He was very sincere and charismatic. Rolando created the Blood Syndicate in the hope that it would provide a way to make meaningful change in the Paris Island area, instead of continuing the same pointless cycles of violence.

It was Tech-9’s force of personality that first bonded the Blood Syndicate. This was despite their origins as the surviving members of numerous rival gangs and the incredible stresses of being hunted by the authorities while dealing with their new-found powers.

His influence was great enough to last beyond his death, keeping the Syndicate together until Wise Son developed the necessary leadership skills to truly fill Tech-9’s shoes.

When Wise Son assumed command of the newly-reformed Blood Syndicate after Holocaust’s aborted attempt at claiming the gang, he switched his old baseball cap for the one that Tech-9 once wore.

“This ain’t about gang banging anymore. This is about power, gee. Real power ! For a fucking change !”

(Taunting Holocaust) “You’re a disgrace ! All that power, all that size — and you’re still getting your ass kicked by a skinny Puerto Rican ![…] Your ladies tell me you got a little dick, too !”

“I’m real proud of how we held together today. I feel like you’re my family, and today proved it.”

The Big Bang and the Blood Syndicate can dropped into any urban area where gang activity plays a major role. Tech-9 can be used individually as an inspirational figure in any urban area.

Indeed, if his efforts started making a real difference, the PCs could be asked to bring this “dangerous vigilante” in, only to discover the only danger Tech-9 presents is endangering the status quo. 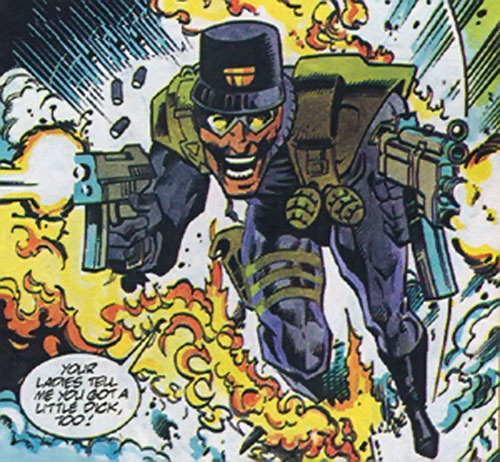