Tech has had her strength, reflexes and agility enhanced through wetware. But those were minor enhancements to better defend herself.

Thus, her physical prowess is remarkable. For instance, she can jump from a four stories building and break her fall by grabbing a flagpole on the other side of the street, all the while holding a 200lbs man. Yet she does not consider herself a fighter and is hesitant to engage in close combat.

Her main power is her ability to telepathically deal with machines and computers and store binary data in her brain.

She can search mainframes and read all needed data within seconds. As another example, fighting her in power armour  is a remarkably bad idea. Those technotelepathic abilities also make her a fearsome hacker. She can easily penetrate the best kept systems in the world.

Although she prefers to use powerful, advanced handguns from a safe distance, her arm bands contains various systems she controls with her mind. But they imply more dangerous modes of fighting, and she doesn’t like to rely on them.

Among those is a sort of memory metal, near-monomolecular sword blade of great efficiency.

Lela Cho was the only child of the millionaire owner of Hong Kong high technology firm Hypersonic. He educated her richly and carefully, or at least he did until he sent her to Harvard . He felt his little girl had what it took to inherit Hypersonic.

He was probably right. Lela was only 23 when she graduated from Harvard with a masters degree in business. However, that was also the year when he died.

The death seemed natural to all involved, including Lela Cho. But Terrance Cho had been killed by a third party that was attempting to control Hypersonic.

When Lela Cho met the board of directors, almost all of them wanted her out. Most of them had been bought. She had no means to stop this well-prepared corporate mutiny.

Seeking an edge to reaffirm her rights as the plurality shareholder, she investigated ultra powers. Her father had told her an important secret. The corporate giant, Nuware, had the means of implanting ultra powers in an human being. Thus was done using a technology called wetware.

This carried an hefty price tag, and was only open to a select few. But Terrance Cho’s daughter could both qualify and pay the price.

But back in Hong Kong, things didn’t go well at all. What she thought was a corporate mutiny was really a criminal gambit run by a mighty triad called the Dragon Fang. She was ambushed by armed killers and forced at gunpoint to sign the papers forfeiting her shares.

Cho only escaped torture and death by diving through a window and fleeing in a nearby limousine.

Lacking options, she ended up in a New York City bar run by Pete Bazzini, an ex-lover. Pete had powerful connections who might be able to help her. While the Dragon Fang were out of Bazzini’s scope, he put her in touch with Troy Wilde, a skilled and well connected professional troubleshooter and mercenary.

Wilde helped Cho escape from a Dragon Fang assassin. He then took her to a secret place behind a pub in London. It served as a meeting point for many mages, ultras and other paranormal types. In the pub, they met and befriended Shadowmage, and a few hours later met and recruited Outrage.

While Wilde was badly wounded while in London, he struck a deal that he would work for Cho if she had him healed, and enhanced with wetware. He took the name Dropkick. Thus was the Solution born.

I have The Solution

The Solution’s first goal is to pay its own upkeep. Since such an operation is expensive, Cho is actively hunting after lucrative contracts for a skilled, small and powerful group of ultrahuman mercenaries.

Another mission is to strike, between contracts, to the Dragon Fangs – in order to weaken them so a direct financial move on Hypersonic becomes possible.

The Solution’s mercenary life carried them through many conflicts. These included a quest to free Shadowmage from the all-powerful Vyr and a successful, although extremely risked, strike against the elders of the Dragon Fang.

As the Ultraverse was shutting down, the end was rushed and Lela Cho won Hypersonic back during the last issue. You should probably forget that part if using the Solution in your campaign.

Lela Cho is several things at once.

Thrust in circumstances beyond her control, Cho keeps on making courageous choices. She feels that she must honour her birthright and her father’s will. Though she is ambitious and wants to be a successful business leader, her respect for her dead father comes first.

She then rides the consequences of her choices as best as she can and with great courage.

She can sometimes seems reckless, due to her lack of experience. Yet she will always accept the consequences of her actions, whatever the risks, and never give in. That makes her a straightforward, reliable and honest person.

Although she always comes across as an uncompromising leader, deep down Cho is nervous and frightened. Yet she’s loyal to her team, due her personality, her image of what a good leader should be, and the fact it is reassuring to have such powerful fighters around.

Lela is the only public voice for The Solution. All others have serious reasons for fleeing media exposure. She’ll just mention a highly trained team of ultras who work undercover and thus cannot reveal their face. This makes The Solution a bit of a mystery for the general public.

Lela’s most common exclamation of surprise is the Chinese “wei !”. I’d imagine it’s actually “呵 !” with an unusual transcription, but who knows.

“Look, I’m the leader of this group. I’ll thank you not to give orders.”

The Solution can exist in nearly any super universe, provided you have can access to cybernetics (something like Nuware or Spiral’s Body Shoppe) and some aliens are around. The team is relatively independent from context.

They’d almost make a perfect PC team if the aliens weren’t much more powerful than the humans. :-)

Also, as a mercenary team, they can credibly appear anywhere and work for most everyone.

Bonuses and Limitations:
Scientist (computers) and Military science (cryptography) are considered a Power (- 5 BC) and normally used along with Telepathy (+0). 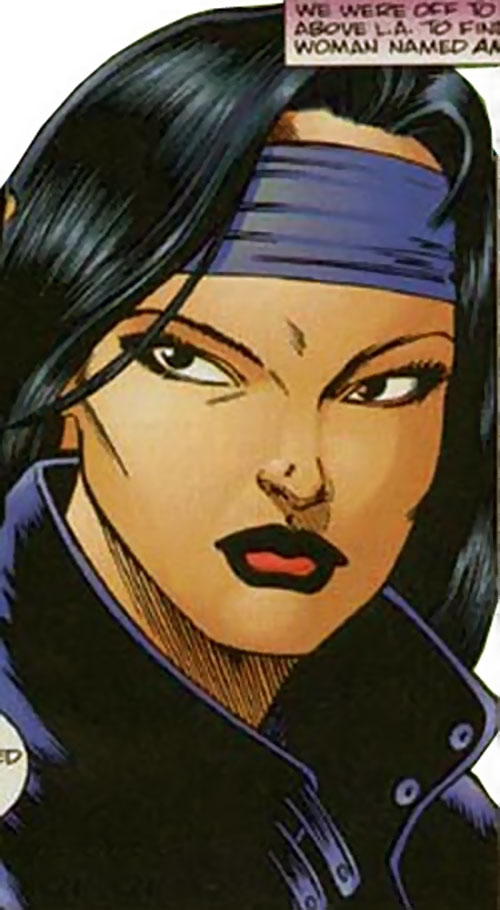 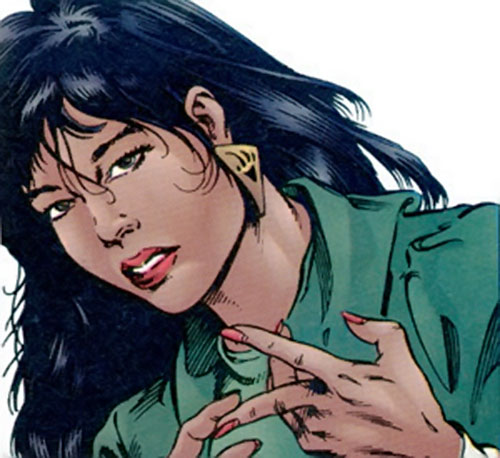