Teela appeared in the 1983/1984 Filmation animated series He-man and the Masters of the Universe.

For more context about that, we suggest that you first read our primer about the Masters of the Universe world.

This entry has small S P O I L E R S. Such as Teela’s parentage right below in the Background block.

Teela has been called the best warrior in all of Eternia. She’s an agile fighter, adept at holds and throws. Though young, Teela has defeated plenty of physically stronger and more experienced fighters.

She underwent extensive training in martial arts, weapons, vehicles, and conduct in the Royal Court. She also studied at some of the best schools in Eternia.

Teela is respected as Captain of the Guard, with her troops following commands without question.

She is one of the top Sky-Sled pilots in the kingdom.

Along with protecting the King and Queen, Teela personally protects and trains the Prince. But Prince Adam doesn’t make this easy. His training program is a tough physical regimen similar to the one Teela got from Man-At-Arms. 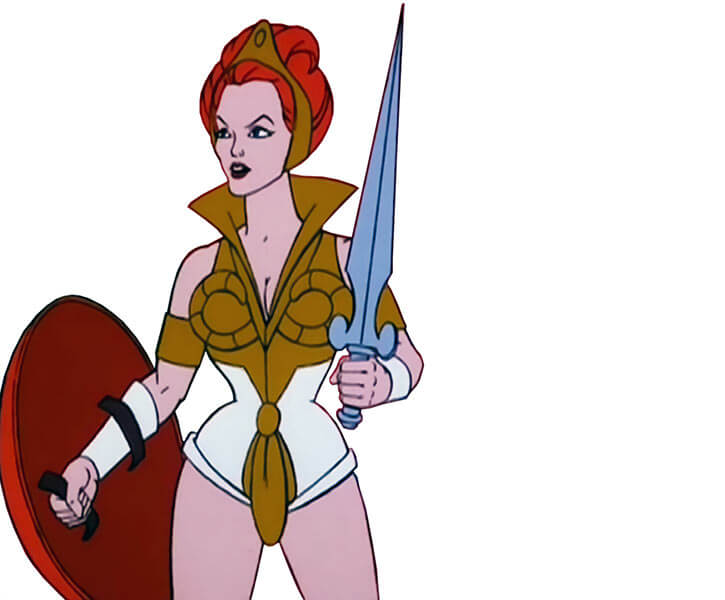 Teela’s father gave his life in battle so Eternians could live in peace.

With her mother’s blessing, Teela was raised by Duncan aka Man-at-arms from an infant. Man-At-Arms, a friend of Teela’s father, taught her both the skills of a warrior and the manners of the Royal Court. Because of his love and guidance, Teela excelled at both.

Before becoming Captain of the Guard, Teela spent months studying at the City of Wisdom. It was there she met Mallek who was training to become a master wizard. Mallek was smitten with Teela but she rejected him.

As an adult, Teela questioned her past. She wanted to learn who her birth mother was.

She learned from the Oracle of the Crystal Sea that her mother is the Sorceress. When the time comes, Teela will take the Sorceress’ place as the Mystic Guardian of Grayskull. However, the Sorceress used her magic to remove this knowledge until Teela’s special destiny calls.

Teela learned that Mallek had destroyed a dam out of heartbreak over her. The waters destroyed the outpost people’s crops.

Teela, with her friends He-man and Ram-Man, traveled to Stone Mountain to confront Mallek. On the way, they spotted a young woman trapped in a glass prison carried by giant pterodactyl-like creature, a shrieker.

After rescuing her they discovered she was Mallek’s assistant, Karyn. Mallek made a deal with a demon called Lokus and traded his soul for Teela’s love.

She helped free Mallek from his deal, though she still had zero romantic interest in him. However, Mallek and Karyn discovered their love for one another. 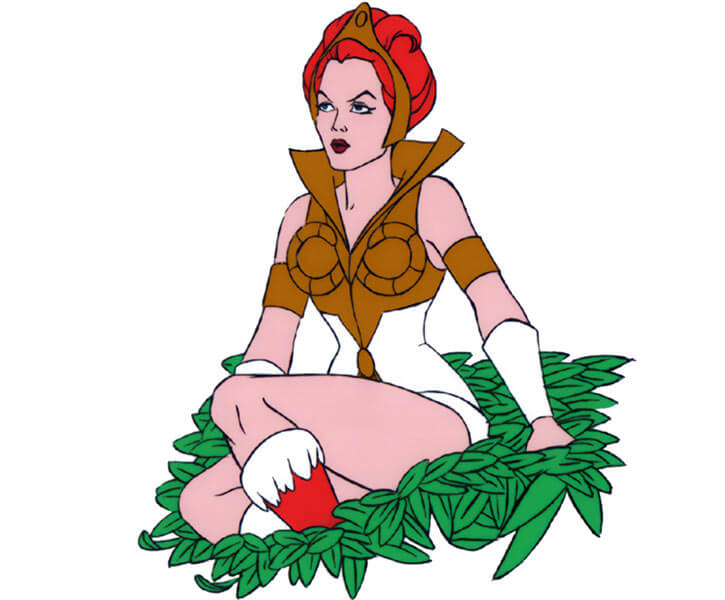 A hint about Teela’s future as Sorceress played out when Skeletor unknowingly sent the Sorceress to an unknown dimensionOther realms of existence that are not our universe..

The Spirit of Grayskull contacted Teela and asked her to take the Sorceress’ place. Bewildered at being chosen, Teela accepted.

He-man traveled to Snake Mountain, guessing correctly that Skeletor was involved. But Evil-Lyn used the ray to send He-man to the unknown dimension.

Teela, dressed as the Sorceress, tried to bluff Skeletor, Evil-Lyn, and Trapjaw. However, Skeletor saw through her disguise.

Teela and the Spirit of Grayskull worked together to take down the evil warriors. When Teela overpowered Evil-Lyn she learned of the other dimension and He-man’s disappearance.

He-man rescued the Sorceress and returned to Grayskull. Skeletor made a hasty exit.

Adam has a sister?

Teela learned from the Sorceress that Adam had journeyed through a doorway inside Castle Grayskull. When he returned he brought his twin sister with him. Adora!

Not long after this joyful reunion for the Royal Family, Skeletor infiltrated the Royal Palace and kidnapped Adora. Teela, Man-At-Arms, and He-man journeyed to Snake Mountain to rescue her.

Upon arrival, they found that She-Ra, a friend of He-man’s, had already rescued Adora. Adora then returned to her own world of Etheria.

Teela continued to help He-man and the other heroic warriors. It seems her special destiny will eventually come, and she will take her place as the new Sorceress of Grayskull.

A red haired beauty with an athletic physique. She always wears her hair short with a pale gold tiara.

Her outfit is a white and pale gold one-piece with a high collar. She has fur topped red and white barbarian boots. White metallic bracers strong enough to deflect energy bolts.

Competitive and ambitious, she rose through the ranks to Captain quickly. She’s driven to get high marks. Yet, Teela is most content with Man-At-Arm’s love and respect.

She’s a good judge of character with good morals.

She has a heart for children and enjoys time with the care-free child-like Widgets.

The evil wizard Kothos once stripped Evil-Lyn of her magic. Teela helped her get them back. Though still enemies, Evil-Lyn is ever grateful (“The Wizard and the Warrior”).

He-man once asked what kind of man Teela preferred. Someone like Adam or himself. She said she would like to find someone with He-man’s courage and Adam’s wit.

Teela is a strong female role in a male-dominated barbaric world. She’s brave, bold, and resourceful. And a great friend. She doesn’t freeze when danger is near. Laughs easily.

On the other hand, Teela also plays the role of a young and innocent girl or disobedient child. ”Aww, Father, can’t I go too?”

Her last role is that of damsel in distress. Teela has been captured several times and used as bait for He-man. One big difference for her is once free she can join in the fighting. 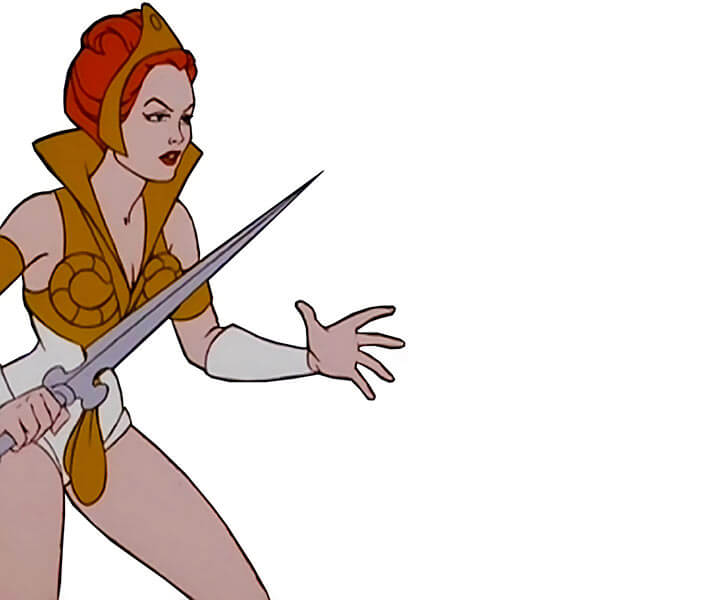 “I can look after myself.”

Man at Arms: “I’ve told you Teela, your father was one of the greatest men I ever knew. He gave his life in battle so Eternians could live in peace. I was honored to adopt you as my own daughter.”
Teela: “And my mother ?”
Man at Arms: “That is a secret I’ve promised never to reveal. Someday you will learn that secret, Teela, but not from me.”

“It’s my sworn duty to protect Prince Adam and that’s what I intend to do.”

“I’m tired of everyone else telling me what I can and can’t do !”

“If it’s a rematch you want, Toad-face, I’ll give you one you won’t forget !”

(Taking the Wind-Raider into a desert storm)
Teela: “Can you plot coordinates without sightings ?”
Prince Adam: “You taught me, remember ?” 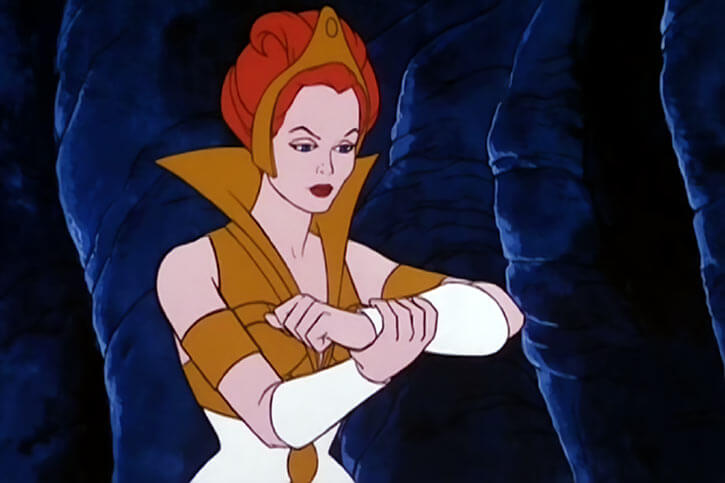 (After Adam failed a gymnastics maneuver… again.)
“Well, I guess that’s enough for today. We’ll try again tomorrow. And we’ll keep trying till you get it right !”

“I’m going to go find Adam and tell him what I think of his running away.”

(When they learn Baron Grodd wants to hunt down the last unicorn in Eternia for sport).
Teela: “When I think of him hunting down a poor defenseless creature, I get so mad !”
Prince Adam: “I don’t like the idea either but we’re dealing with a loyal nobleman not with Skeletor.”
Teela: “Well, if you ask me he’s almost as bad as Skeletor.”

(After deciphering some writing on the entrance of a newly discovered temple).
Orko: “I didn’t know you could read that stuff.”
Teela: “I’ve always been interested in ancient Eternian languages and this one is extremely old.” 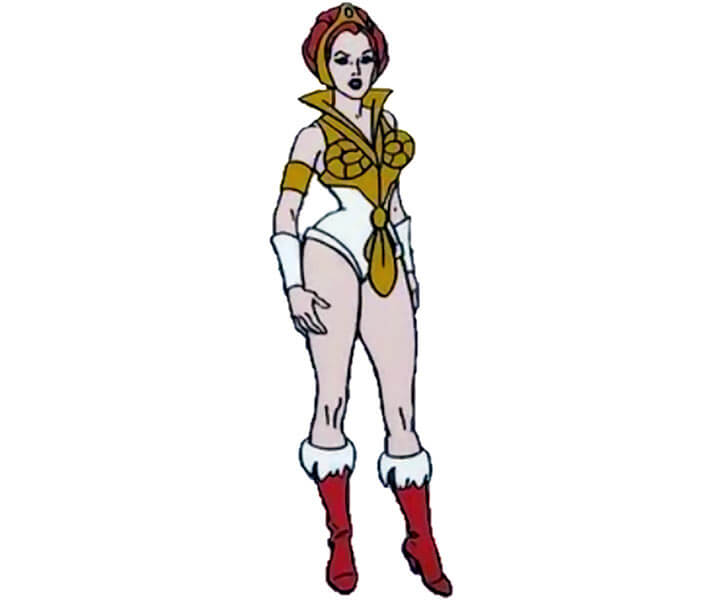 Captain of the Royal Guard.

This is equipment she has used before, especially when adventuring, but isn’t part of her usual loadout. 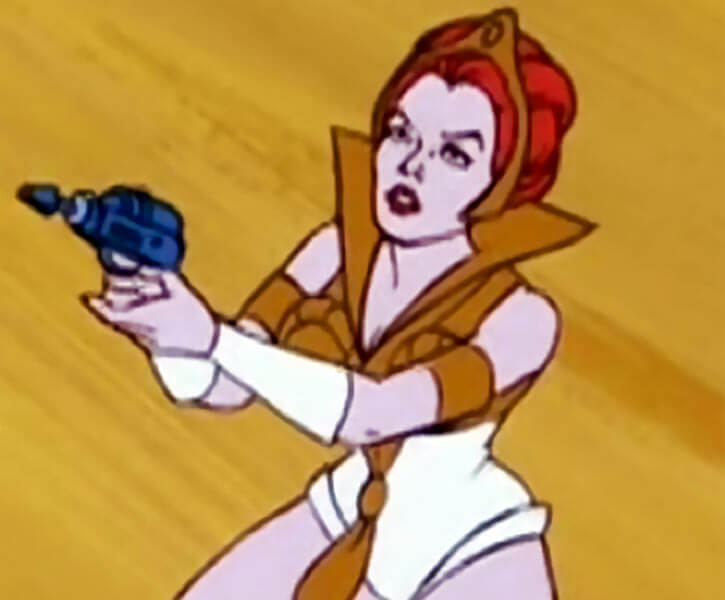 During “Beastly Sideshow” Beast-man ordered his Shadow Beast, to go after Teela. Saying, “Let’s see if beauty can tame the savage beast!” it picked up Teela.

Man-At-Arms moved to save her but she told him to stay back. She looked into the creatures eyes and talked it into putting her down and leaving her alone. The beast listened to her and returned to its cage.

Teela displays notable physical strength until episode “The Taking of Grayskull” when she could hardly do a pull-up. I suppose it could have been the strength of the White Hole; Man-At-Arms had warned of its strength. None of their devices worked there.

Teela may have a Minor Irrational Attraction to He-man. It isn’t consistently shown but looks pretty obvious at times (“Pawns of the Game Master” episode).

Sometimes Teela detects odd things about others. Once she was near Adam as he transformed into He-man, she commented that she felt the presence of her mother.

In one episode Teela practiced blind fighting. I was tempted to give her Schtick (Blind Fighting) but decided against it. She never shows this skill again.

Teela’s gauntlet: The first time the Freeze Ray was used on a living being it looked like Mystic Freeze. In “Like Father like daughter” and “The Dragon’s gift” and from then on it was definitely ice. Sometimes this is Teela’s Left Gauntlet with the same stats. Rarely, Teela used her gauntlet to block incoming fire. 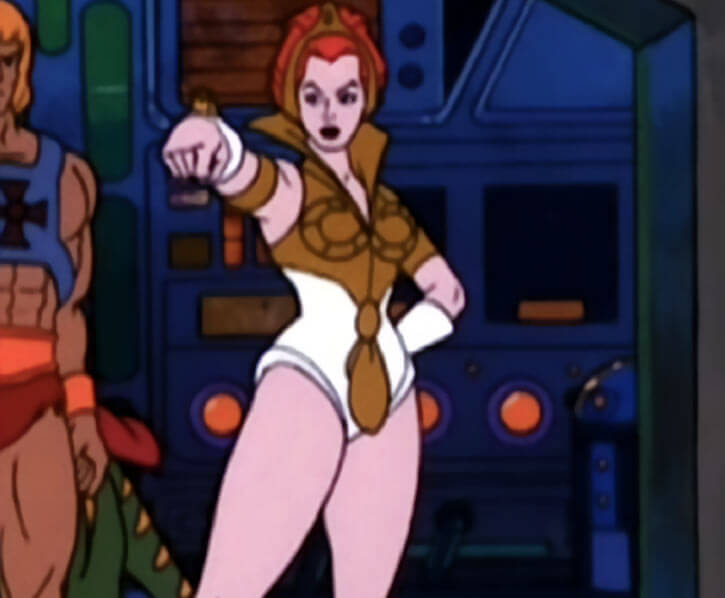 When Teela’s action figure was released, she had a snake staff, a shield – and body armor that made her resemble a reddish-brown cobra.

The mini-comics had a different continuity from what was later seen in the cartoons. For instance, Teela was definitely next in line for the role of Sorceress of Grayskull. She was in fact a clone of her, grown by Skeletor and rescued by Man-At-Arms.

Her animal form may have been a snake if the story ever reached its eventual conclusion.

(That Skeletor’s and He-Man’s swords could be combined to become swords of powers may be the best-known aspect of this abandoned continuity).

Source of Character: The 1983/1984 animated series He-Man and the Masters of the Universe, He-man and She-Ra: A Christmas Special, and the 1985-1987 She-Ra Princess of Power animated series. Voiced by Linda Gary (sometimes credited as Linda Gray).